On the day after the massacre, Lee and the other Mormons started off with the rest of the children, leaving Rebecca, Louisa and Sarah Dunlap with Jacob Hamblin. After the lapse of several weeks, Mrs. Evans says she went back to the scene of the massacre with some Mormon girls. None of the dead bodies had been buried, but wild animals and buzzards were eating the flesh from their bones. She was only able to recognize one corpse and that one was Jack Baker, a very prominent character among the emigrants. She recognized him by his long beard. Mrs. Evans says the report they were kindly treated and well cared for while in hands of the Mormons, is false. To the contrary she says they were only half fed and half clothed and harshly treated.

Mrs. Evans and her sisters did not long remain at Mountain Meadows, but soon moved with Hamblin to the fort of Santa Clara. They remained in the hands of Hamblin for nearly two years, before they were rescued. The rescue of these children from the Mormons was an undertaking involving a great deal of difficulty and danger. United States Indian Agent Dr. Forney, Deputy Marshal Rogers and Capt. James Lynch, with a body of United States troops, took party in the rescue. The children were kept for some time in Salt Lake City. Captain Lynch then carried the children back to their homes in Arkansas and other states wherever they had relatives. He carried the three Dunlap girls back to Carroll (now Boone) county. Their uncle, James Dunlap, who was then living at Carrollton, took all three of them and treated them as his own children. Here they lived uneventful lives, attending school, and doing pretty much what other girls do, until Rebecca was 23 years of age, when, as usually happens, she, too, had her dreams of love fulfilled and was united in marriage to Mr. Evans, who carried her to Calhoun county to reside. There they lived until December 15, 1895, when they moved to Drew County, where they now reside. They have five children.

Louisa Dunlap was married to James Linton in Boone county in 1876. They have five children.

Sarah Dunlap, the youngest, has never recovered the use of her arm, which was shot during the massacre. She has also been afflicted with weak eyes most of her life. She went to the blind school in Little Rock and remained until she graduated. During all these years the memory of Captain Lynch, who brought these girls away from the Mormons, had been cherished fondly by them. They were very much grieved to hear in January 1893, that Captain Lynch was seriously ill at his home in Washington City. In this letter, it was stated that Captain Lynch had signified his intention of leaving all his property to the survivors of the Mountain Meadows Massacre. Sarah, moved by a feeling of gratitude for all that Captain Lynch had done for them, immediately wrote to him, offering to come to Washington and wait upon him as his nurse. He, in the meantime, had grown better and responded to her letter. A lively correspondence was then carried on between the two for about a year by which time Cupid had done his work. The little infant, now 37 years old, gave her hand and heart to the hero of her dreams who had rescued her from the Mormons thirty-five years before, and who was now 75 years old. They are now living happily together at Woodbury, Calhoun County, Arkansas.

And here we let the curtain drop. But before bringing this article to a close, it is proper to state that the seventeen survivors of this horrible massacre have never recovered one cent damages from the Mormons for the murder of their parents and relatives and the robbery of their property. Efforts are now being made to get a bill through Congress which will afford them some slight recompense for the terrible disaster of forty years ago. Captain Thornton, of Camden, has the matter in charge, and we trust his efforts may prove successful.

The Mountain Meadows Massacre: An Episode on the Road to Zion, by Sara Frances “Sallie” Baker Mitchell, The American Weekly, September 1940 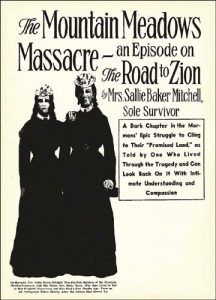 I’ve been interested in the series of articles running in The American Weekly about the Mormons, especially what has been said about the Mountain Meadows Massacre, way back in September 1857.

I’m the only person still living who was in that massacre, where the Mormons and the Indians attacked a party of 137 settlers on the way to California, murdering everybody except 17 children, who were spared because they were all under eight years of age.

I was one of those children and when the killing started I was sitting on my daddy’s lap in one of the wagons. The same bullet that snuffed out his life took a nick out of my left ear, leaving a scar you can see to this day.

Last November, I passed my 85th birthday and at the time of the massacre I wasn’t quite three years old. But even when you’re that young, you don’t forget the horror of having your father gasp for breath and grow limp, while you have your arms around his neck, screaming with terror. You don’t forget the blood-curdling war whoops and the banging of guns all around you. You don’t for­get the screaming of the other children and the agonized shrieks of women being hacked to death with tomahawks. And you wouldn’t forget it, either, if you saw your own mother topple over in the wagon beside you, with a big red splotch getting bigger and bigger on the front of her calico dress.

When the massacre started, Mother had my baby brother, Billy, in her lap and my two sisters, Betty and Mary Levina, were sitting in the back of the wagon. Billy wasn’t quite two, Betty was about five and Vina was eight.

We never knew what became of Vina. Betty saw some Mormons leading her over the hill, while the killing was still going on. Maybe they treated her the way the Dunlap girls were treated, later on, I’m going to tell you about the horrible thing that happened to them. And maybe they raised her up to be a Mormon. We never could find out.

Betty, Billy, and I were taken to a Mormon home and kept there till the soldiers rescued us, along with the other children, about a year later, and carried us back to our folks in Arkansas. Captain James Lynch was in charge of the soldiers who found us, and I’ve got an interesting little thing to tell about him, too, when I get around to it.

But first I want to tell all I remember and all I’ve heard about the massacre itself, and what lead up to it.