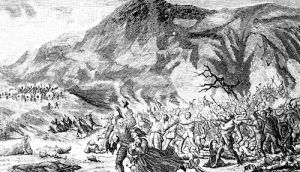 George W. Adair, Jr. – A private in the Fifth Platoon, Company I, of the Iron County Militia, was one of the few men ever indicted in the massacre. In the summer of 1874, an indictment for murder was handed down against Adair, and eight other men, but only John D. Lee would ever be tried. Though most accounts of the time claimed that the militia killed only the adult males and the Paiutes killed the women and children, later statements disputed this, indicating the white men did most of the killing under orders from Major John M. Higbee.

Though there were numerous privates in the Iron Militia that were never indicted, the young Adair, who was allegedly a heavy drinker, brought attention to himself in the streets of Cedar City by boasting about the killings.

Laughingly, he was said to have imitated how he had taken babies by their heels, swinging them into the iron bands of the wagon wheels, crushing the skulls in the process. Private Adair was arrested and jailed for six months before he was released on bail on May 12, 1876. When U.S. .S. Attorney Sumner Howard recommended to Adair that he plead guilty to the charges against him, Adair allegedly responded, “I’ll see you in Hell first!” Unfortunately, the charges were never followed through with Adair. 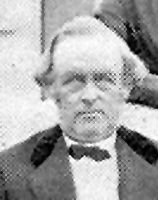 William H. Dame (1819-1884) – Born in Stafford County, New Hampshire on July 15, 1819, Dame obviously made his way westward somewhere along the line and had at least one wife, Lovinia Dame. In 1857, he was a colonel and regimental commander of the Tenth Regiment and stake president (mayor) of the Parowan Ward. Dame was administratively responsible for the actions of officers and soldiers under his command. Though under the ecclesiastical direction of President Isaac C. Haight, his religious superior was actually his military inferior, thus giving Dame more accountability and responsibility in the Mountain Meadows Massacre matters. Though he did not participate personally in the massacre, he traveled to the site the following morning, and when he saw the terrible carnage, he allegedly explained,  “Horrible! Horrible!” as the color drained from his face. Isaac C. Haight, how had participated in the massacre, responded, “You should have thought of that before you issued the orders.” Then Dame reportedly said: “I didn’t think there were so many of them [women and children], or I would not have had anything do with it.” When Dame collapsed in distress, an angry Haight yelled at his military superior, “You throw the blame of this thing on me, and I will be revenged on you if I have to meet you in hell to get it!” Both men would retain their militia commands, and Dame would become the president of the Parowan Stake, a position he held until 1880.

Years after the bloody massacre, Dame and Haight, and seven other men were served with indictments and warrants issued for their arrest in 1874. Though they went into hiding, Dame was found and apprehended. He was first jailed in Beaver, Utah, before being transferred to the territorial penitentiary, where he remained until May 1876, when he was released pending trial. In September 1876, as Lee’s second trial was about to begin, Prosecutor Sumner Howard dropped the charges against Dame, apparently as part of the deal with church authorities allowing Howard to convict Lee. He died on August 16, 1884, and was buried in the Parowan City Cemetery. 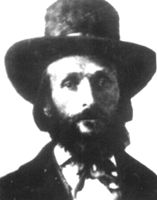 Isaac Chauncey Haight (1813-1886) – Born in Windham, New York, Haight was an early convert to Mormonism and was in Nauvoo, Illinois when Joseph Smith, founder of the sect, was killed. He migrated with other Mormon members in 1847 to Salt Lake City, Utah, and a year later, he and about 50 other members were sent south to establish the city of Parowan. By 1853, Haight was directing church immigration to Utah and in 1854 was sent to Cedar City, Utah, to take charge of the ironworks. There, he also became the ecclesiastical leader of several area congregations, was the mayor of the town, a territorial legislator (Council of Fifty), and the President of the Parowan “stake of Zion,” reporting directly to Brigham Young. However, it was his role as second-in-command of the Iron County Militia that garnered his reputation as one of the leaders of the Mountain Meadows Massacre. In this capacity, he ordered the massacre of the Baker–Fancher party on September 11, 1857.

After the tragic event, the government began to look into the killings, but investigations were interrupted by the Civil War. Under public pressure, Haight was excommunicated from the Mormon Church in 1870, but four years later, he was reinstated by Brigham Young. That same year, though, Haight and eight others were indicted for the crime. Haight went into hiding, and a $500 reward was posted for his capture. Haight lived for a while in Manassa, Colorado, before moving to Thatcher, Arizona, where he took his mother’s maiden name of Horton. He died there on September 8, 1886, of a lung affliction. Only John D. Lee ever stood trial for the killings, during which he was convicted and executed in 1876.

Jacob Hamblin (1819-1886) – Born in Ohio on April 6, 1819, Hamblin grew up to marry Lucinda Taylor in 1839; the two settled down in Wisconsin and would have four children. In 1842, the couple converted to Mormonism. In 1849, the same year that Jacob decided to fully embrace Mormonism and its polygamy policies by marrying a second wife named Rachel Judd, was also the same year that Lucinda abandoned her husband and their children.  The following year, Jacob and his “new” wife went to Utah, where they settled near Tooele. He quickly became known for his good relations between the settlers and Indians, and in 1854 he was called upon to serve a mission to the southern Paiutes and moved to a homestead near Santa Clara.

In August 1857, Hamblin became the president of the Utah Indian Mission. That same month, Hamblin traveled to Salt Lake City with Apostle George A. Smith, who had been dispatched to the southern Mormon colonies to warn of the approaching United States army and recommend that the colonists not trade with any non-Mormons then traveling through their territory. On their way to Salt Lake City, Hamblin and Smith actually encountered the ill-fated Fancher party, and when questioned about where they pioneers might rest their cattle, Hamblin suggested his own homestead at Mountain Meadows. Some accounts say that he was “ordered” to make the suggestion.

In Salt Lake City, Hamblin met with Mormon leaders, including Brigham Young, who urged Hamblin to “not permit the brethren to part with their guns and ammunition, but save them against the hour of need.” He further instructed Hamblin that the Indians “must learn to help us or the United States will kill us both.” In the meetings, the Southern Paiute were authorized to steal cattle from travelers as a part of Brigham Young’s Utah War strategy. He was also informed that the Fancher party was allegedly “behaving badly” by robbing chicken roosts, poisoning water, and using abusive language to Mormons they met along the way. While at the capitol, Hamblin also took yet another wife, Sarah Priscilla Leavitt.

Hamblin had not yet returned home when the massacre occurred. On the trail south, he met John D. Lee, who Hamblin would later say admitted his role in the killings. Though Hamblin was well known for his honesty, many historians believe that Hamblin’s account of the events was to implicate Lee and shield other Mormons. In 1876, his testimony at John D. Lee’s trial was paramount in Lee’s conviction.