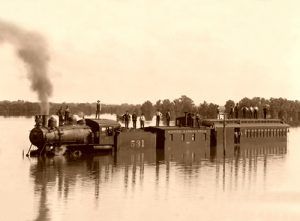 Quotes from Newspapers and Books

“The time will come when people will travel in stages moved by steam engines from one city to another, almost as fast as birds can fly, 15 or 20 miles an hour… A carriage will start from Washington in the morning, the passengers will breakfast at Baltimore, dine at Philadelphia, and sup in New York the same day… Engines will drive boats 10 or 12 miles an hour, and there will be hundreds of steamers running on the Mississippi, as predicted years ago.”  — Oliver Evans, 1800.

“A railroad is like a lie you have to keep building it to make it stand.” — Mark Twain

“RAILROAD, n. The chief of many mechanical devices enabling us to get away from where we are to where we are no better off. For this purpose, the railroad is held in highest favor by the optimist, for it permits him to make the transit with great expedition. — Ambrose Bierce

“Nothing was more up-to-date when it was built, or is more obsolete today, than the railroad station.” — Ada Louise Huxtable

“A private railroad car is not an acquired taste. One takes to it immediately.” — Eleanor Robson Belmont (1879-1979)

“The introduction of so powerful an agent as steam to a carriage on wheels will make a great change in the situation of man.” — Thomas Jefferson, 1802 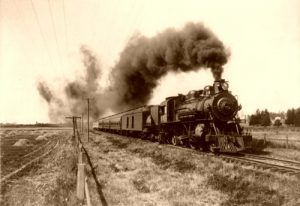 Railroad train with locomotive in foreground 1915

“If God had meant for us to fly, he wouldn’t have given us the railways.” — Unknown

“Rail travel at high speeds is not possible because passengers, unable to breathe, would die of asphyxia.” —  Dionysius Lardner (1842 – 1914) US journalist, short-story writer

“I can see nothing to hinder a steam carriage moving on its ways with a velocity of 100 miles an hour.” — Colonel John Stevens, 1812

“Railroad iron is a magician’s rod, in its power to evoke the sleeping energies of land and water.” — Ralph Waldo Emerson (1803–1882)

“Only fools want to travel all the time. Sensible men want to arrive.” — Metternick

“One stretch of track was so crooked we met ourselves coming back.” – Unknown 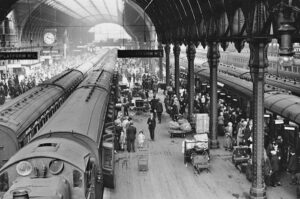 Quotes Appearing in Books and Newspapers:

“On which side of the platform is my train?” asked a stranger in a Jersey City depot the other day. “Well, my friend,” replied a gentleman, passing, “if you take the left, you’ll be right; if you take the right, you’ll be left.” — Weekly Mountaineer, The Dales, Oregon, January 6, 1877

An old man with long gray whiskers came through the cars selling popcorn, chewing gum, and candy. “Hey!” said one of his customers. “I thought young boys were supposed to do your job.”  “I was a boy when this train started.” — On A Slow Train Through Arkansas, Thomas W. Jackson, 1903.

A conductor on the Chicago & Alton Railroad is reported as having forbidden honeymoon “billing and cooing.” Observing a bridegroom’s arm out of place, he forbade further demonstrations. “But I have a right to hug her,” said John.  “Not on a railroad,” said the conductor, “there is a law against all unjust discriminations on railroads, and as I haven’t a woman for each man on the train to hug, your action is in violation of the law and must be stopped.” — Bedrock Democrat, Baker City, Oregon, March 11, 1874.

The unintelligibility of a brakeman’s call when announcing a station is proverbial. The other day however one called Yuma plainly enough. There was a sheriff on the train with some prisoners for the penitentiary, and upon announcing the arrival, the brakeman shouted: “Yuma! Change Clothes; 10 years for refreshments!” — The Daily Arizona Miner, Prescott, Arizona May 20, 1884 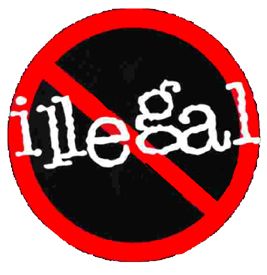 Railroad Prohibitions: At one time, these were (and sometimes still are) actual laws or railroad rules.

West Virginia law required that if a railroad passed within one mile of a community with 100 or more people, then it was required to build a station and stop there regularly to pick up and drop off passengers.

A Chicago, Illinois law once prohibited eating in a place that was on fire. After much discussion, a 1912 amendment exempted dining cars on steam trains.

Texas law once said: When two trains meet each other at a railroad crossing: each train shall come to a full stop, and neither train shall proceed until the other has gone. Huh??

A New York City Ordinance prohibited the shooting of rabbits from the rear of a Third Avenue street car if it was in motion.

Believe it or not, putting salt on a railroad track in Alabama was once punishable by death.

It is considered a misdemeanor offense to throw pickle juice at a trolley in Rhode Island. 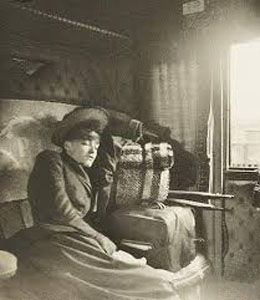 Sleeping on a train.

In West Virginia, it was once illegal to sleep on a train.

In Seattle, Washington, women who sit on men’s laps on trains without placing a pillow between them would face an automatic six-month jail term.

It is against the law for a railroad to remove itself from a town of more than 500 people in South Carolina.

In Washington state, a dog must have accompanied the cowcatcher to scare livestock from the tracks.

If you attack a train in Indiana, you’re gonna be jailed!

In South Dakota, it is illegal to place firecrackers on railroad tracks. The fine doubles if they are lit.

In Rhode Island, it is illegal to operate a passenger car between a locomotive and a load of dirt.

The state of Minnesota enacted a law that defined all railroad cars as buildings and, as such, were subject to the same rules and restrictions listed in state building codes.

It is illegal to place soap on railroad tracks in Mississippi.

In Wisconsin, it was once illegal to kiss on a train.

In South Carolina, railroad companies may be held liable for scaring horses.

A Gary, Indiana, an ordinance once prohibited anyone from attending a movie house, theater, or riding on a  public streetcar within four hours of eating garlic. 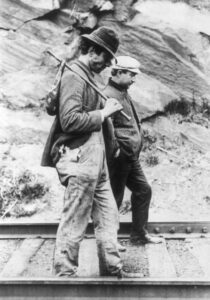 Two drunks were walking upgrade between the railroad tracks. One of them said, “this is longest stairway I have ever been on.” To this, the other replied, “It’s not the stairs that bother me, it’s the low banister.”

A large two-engined train was crossing America. After they had gone some distance, one of the engines broke down. “No problem,” the engineer thought and carried on at half power. Farther on down the line, the second engine broke down, and the train slowed to a dead stop. The engineer decided he should inform the passengers about why the train had stopped and made the following announcement:

“Ladies and gentlemen, I have some good news and some bad news. The bad news is that both engines have failed, and we will be stuck here for some time. The good news is that you decided to take the train and not fly.”

A man and a woman, who had never met before, found themselves assigned to the same sleeping room on a transcontinental train.  Although initially embarrassed and uneasy over sharing a room, the two are tired and fall asleep quickly — he in the upper bunk and she in the lower.  At 2:00 a.m., he leans over and gently wakes the woman, saying, “Ma’am, I’m sorry to bother you, but would you be willing to reach into the closet to get me a second blanket?  I’m awfully cold.”  “I have a better idea,” she replies. “Just for tonight, let’s pretend that we’re married.”  “Wow!  That’s a great idea!!” he exclaims.  “Good,” she replies.  “Get your own damn blanket.”

Two drunks were walking down a New York City street when one fell down the subway steps.  When he got back up top, he told his drinking partner, “… boy you got to see that guy’s train set in the basement!” 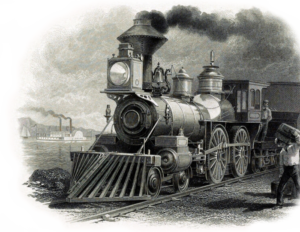 Compiled and edited by Kathy Alexander/Legends of America, updated September 2022.