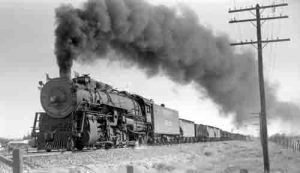 The country through which the Union Pacific Railroad was built was the hunting grounds of the Pawnee, Sioux, Arapaho, Crow, Blackfoot, Bannock, Snake and Shoshone, the first three on the plains and the others to the west. These were among the most warlike tribes of the West, and during the construction of the road, they were the occasion of serious trouble, not to speak of the annoyance and delay as well as the extra expense occasioned.

The following summarizes the conditions existing on the plains during the time the road was under construction.

During the summer of 1864, the whole line of the Overland Stage from St. Joseph, Missouri, to Salt Lake City, was subject to Indian depredations, so much so, that Ben Holladay, its proprietor, asked the Government for five soldiers at each of the stage stations, and two to accompany each coach. Without these, he stated, he would discontinue the line.

The year 1865 was known as “The Bloody Year on the Plains,” and its history is one constant account of attacks, skirmishes, depredations, and murders by the Indians.

Notwithstanding the Peace Conference at Laramie in May, the year 1866, was not much better and the relations between the whites and the Indians were kept at a fighting point, culminating in the massacre by the Indians at Fort Phil Kearny of eighty-one regular soldiers.

The year 1867 opened with troubles all along the line. The Government inspectors reported “Indian depredations have caused serious embarrassment to the locating, construction and operation of the line. Constant and persistent attacks have occasioned great delay and expense.” The Government aroused to the dangers of temporizing, pushed a large number of troops into the field, restored old and built many new posts. This, together with the ease of communication resulting from the rapidly extending railroad, had a deterrent effect on the Indians.

1868 was a repetition of the preceding year. A Peace Conference at Fort Laramie called for April was not attended by the Indians until November. Numerous attacks were made by them on the whites and the country kept in a turmoil. During the fall there was desperate fighting and the army assisted by citizens soldiers punished the Indians as they had never been punished before, resulting in a much better condition of affairs during 1869 and thereafter. Nearly all the Indian troubles occurred on the plains and east of Cheyenne. West thereof, either owing to better organization on the part of the railroad and military, or else to the intimidation of the tribes, there was but little annoyance from this source. 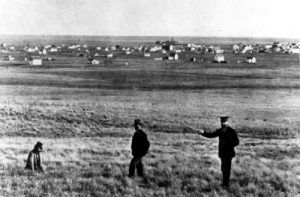 The surveying parties were as a rule accompanied by a small detachment of regulars and to this fact may be attributed their comparative small loss of life. While they lost but few of their number, still they were compelled to work at a great disadvantage and frequently brought to a full stop by the presence of war parties in numbers too great to be ignored.

They, the surveying and engineering parties, were not so strong numerically as the grading outfits and did not have their resources. The different parties not only were frequently driven in but a number of them were obliged to fight for their lives. The station Hilldale, Wyoming, perpetuates the name of one engineer, Mr. Hill, who was killed near this place by the Indians while locating the road.

Another victim of the Indians was Colonel Percy in charge of an engineering party on the preliminary survey. He was surprised by a party of them twenty-four miles west of Medicine Bow, Wyoming —retreating to a cabin he stood them off for three days, at the end of which time they managed to set fire to the building and when the roof fell in he was compelled to get out, whereupon he was attacked and killed. This took place near Hanna Station, Wyoming, which was originally called Percy in memory of the Colonel.

Realizing the necessity of military to protect the construction forces, the Government established numerous forts or posts along the line, viz:

Fort Sedgwick, Colorado, about four miles from the town of Julesburg, Colorado.

Fort Mitchell, near Scotts Bluffs, Nebraska, a temporary proposition occupied only during the construction period.

Fort Morgan, Wyoming, not far from Sidney, Wyoming, established May 1865, abandoned May 1868.

General Sherman had prophesied that the influx of graders, teamsters, with their following would bring enough whiskey into the country to kill off all the Indians, and that the only good Indians were the dead ones.

2 thoughts on “Indian Troubles During Construction of the Railroad”