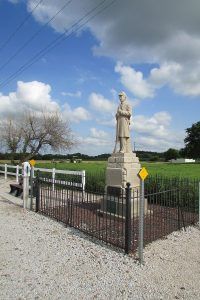 Site of Fort McPherson, along the Oregon and California Trails, courtesy Wikipedia

Fort McPherson, Nebraska was first established in October 1863 in Cottonwood Canyon to protect the Overland Trail between Fort Kearny and Julesburg, Colorado. It was first known as Cantonment McKean, but was changed to Fort Cottonwood when construction began.

However, it was soon moved closer to the town of Maxwell, Nebraska. It was renamed Fort McPherson on February 26, 1866, to honor General James B. McPherson, who had fallen while fighting with General William T. Sherman against the Confederate forces in the battle for Atlanta. The main activities of the fort during its 17 years of activity, were escorting stagecoaches and emigrant wagon trains; pursuing and punishing Indians for depredations; and protecting the mail and the telegraph lines.

Fort McPherson played an important role in the Indian Wars from 1864 until its abandonment in 1880. Numerous important campaigns and expeditions were launched from the fort including that of General Eugene Carr which culminated in the defeat of the Cheyenne Indians at the Battle of Summit Springs. Buffalo Bill Cody, the North Brothers, and the Pawnee Scouts all served at Fort McPherson during this period. Lieutenant Colonel George A. Custer led the 7th Cavalry from Fort McPherson on June 15th, 1867 for operations against Indians in Kansas.

On October 13, 1873, a tract of 107 acres was set aside as a national cemetery. Subsequent reductions have limited the size of the cemetery to twenty acres. Burials in the McPherson National Cemetery have included soldiers who served in the Indian Wars through the west, as well as those who have served in the Civil War, Spanish-American War, World Wars I and II, and the Korean War.

After providing nearly two decades of strong economic and developmental influences for hundreds of miles, the fort was abandoned by the Army in 1880. The following spring, the buildings were sold at auction. Today, all that’s left is the National Cemetery, located at Maxwell, Nebraska.