The National Park Service administers Scotts Bluff National Monument to protect 3,000 acres of unusual land formations that rise over the otherwise flat Nebraska prairie land. Scotts Bluff itself is an ancient landmark that was once part of the ancient High Plains. In addition to being a prominent geological feature, Scotts Bluff was a major landmark to travelers in the North Platte Valley who were part of the great westward overland migration during the 19th century. American Indians lived in the area for many years prior. The vast herds of buffalo that inhabited the region made Scotts Bluff a major hunting ground of the Sioux. An Indian name for the bluff is Me-a-pa-te or “the-hill-that-is-hard-to-go-around.” The bluff takes its name from a fur trapper, Hiram Scott, who died in the vicinity in 1828.  Scott’s Bluff National Monument, two miles west of Gering, has a museum, overland trail history, artifacts, and an extensive collection of the paintings of William Henry Jackson. 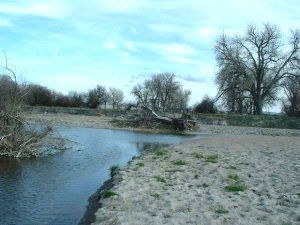 Horse Creek Station – The Horse Creek Station site was most likely located on the west bank of Horse Creek, about two miles northeast of Lyman, in Scotts Bluff County. The station served as a stop for the Pony Express and some sources also say it possibly served as the site of Joseph Robidoux’s second trading post.

Cold Springs/Spring Ranch/Torrington Station – A number of sources identify Cold Springs as a Pony Express station, and give the location of this site as being about two miles southeast of Torrington, Wyoming. At one point, this area held a cluster of famous cold springs. The site of this station also served as the grounds for the signing of the Horse Creek Treaty. A French-Canadian trader named Reynal managed operations at Spring Ranch with his Indian wife and daughter. The Pawnee had held him prisoner in his younger days as a trader and later adopted him as a tribal son. Some historians noted Torrington as a separate station after Cold Springs/Spring Ranch. It was located 12 miles from Horse Creek Station in Nebraska and 13 miles from Verdling’s Ranch Station.

Verdling’s Ranch/Bordeaux/Bedeau’s Ranch/ Fort Benard Station -Verdling’s Ranch Station was probably eight miles from Fort Laramie and two miles west of Lingle, Wyoming. The site had formerly been the trading post of  French-Canadian George P. Beauvias and his Indian wife and children who witnessed the Grattan Massacre on August 19, 1854. Beauvias later sold the site to James Bordeaux (spelled various ways), probably another French-Canadian, who managed a trading post and store. It was sold once again to an  M. Bordeaux, who was Station Tender in 1860.

Nine Mile/Sand Point/Ward’s/Central Star Station – This site is nine miles west of Fort Laramie. Sources identify this station by several names, including Nine Mile Station, Sand Point, Ward’s, and Central Star. Sand Point served as both relay station for the Pony Express and stage lines. Sand Point, was situated in the meadow at the foot of Register Cliff was called, was the first stopping place of the emigrants west of Fort Laramie. In the 1840s William Guerrier and his partner, Seth Ward, kept a trading post. In the 1850s, Jules E. Coffee, managed a stage station here. A relay station for Pony Express Riders and stage drivers sat here during the days of the Pony Express.

Cottonwood Station – Several sources identify Cottonwood as a station between Nine Mile Station and Horseshoe Creek. Cottonwood Creek is often mentioned in diaries and journals of pioneers and military men, as well as the itineraries of stage and Pony Express routes. Here, Station Tender Hod Russell was killed by rider Jennings, who was hung at Fort Laramie for the crime. It was located 12 miles from Nine Mile House Station and 15 miles from Horseshoe Station near Cottonwood Creek.

Horseshoe Creek/Horseshoe Station – This site served as the last station in Division Two of the Pony Express. Division Superintendent Joseph A. Slade lived at Horseshoe Creek with his wife, Molly, and family. A notorious character, Joe Slade, ruled this vicinity with an iron hand. After firing Jules Beni who was the manager of the Julesburg, Colorado station, the two became hard enemies and Slade killed Beni and cut off his ears. Slade was later hanged by vigilantes in Montana. The location not only served as a Pony Express station but also served the stagecoach line and was an Overland Telegraph Station. It was destroyed in a three-day siege by Indians in March 1868. It is located 15 miles from Cottonwood Station and 10 miles from Elk Horn Station. The site is marked by a white post.

Compiled by Kathy Weiser-Alexander, May 2018.