James “Jim” Alexander Moore was one of the first Pony Express riders hired in the St. Joseph, Missouri division.

James was born on May 18, 1840, in Poland, Ohio, to James and Margaret Finley Moore. When he was just a young boy, he traveled with his older brother, Charles, to Chicago, Illinois, where they lived for about two years, engaging in the business of shipping horses. The pair then made their way to Colorado, where, at the age of 19, James was working with the Central Overland California and Pikes Peak Express Company, which would create the Pony Express. He was soon aiding them to carry out their business through a hostile Indian country as he became a Pony Express Rider.

Moore is known for making his greatest ride on June 8, 1860. While at the Midway Station in Nebraska, halfway between the Missouri River and Denver, Colorado, the westbound messenger arrived with important Government dispatches to California. Moore “took up the run,” riding continuously 140 miles to old Julesburg, Colorado, at the end of his division, where he was to be relieved. However, once he got there, he found his relief rider had been killed by Indians the day before. Moore was back in the saddle within ten minutes without even stopping to eat, turning around and making the return trip, changing mounts at Thirty-Mile Ridge and Mud Springs before ending at Midway.

By the end of his journey, he had completed a round-trip of 280 miles in 14 hours and 46 minutes — roughly 18 miles an hour. In the meantime, his westbound mail had gone from St. Joseph, Missouri, to Sacramento, California, on a record-making run of eight days and nine hours. The ride was described in Colonel Henry Inman’s and William “Buffalo Bill” Cody’s book, The Great Salt Lake Trail.

After the Pony Express went out of business, Moore became the first post-trader at Sidney, Nebraska, and soon became a rancher in the South Platte Valley of Nebraska and Wyoming. He founded, along with his older brother, Charles Moore, the JM Ranch situated along Rawhide Creek south of Lusk, Wyoming, in 1869. The pair expanded their operations on the North Platte River at Cedar Creek, Nebraska, and on the South Platte River near present-day Sterling, Colorado. Showing the same fortitude he had as a Pony Express rider, the young James Moore became the owner of the second-largest cattle ranch in the Wyoming Territory, under the brand “J Rolling M,” from which the community of Jay Em and Jay Em Creek would take later their names. 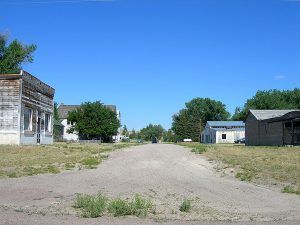 Unfortunately, in 1873, James suffered a protracted illness of about three months after being thrown from a hay wagon by a runaway team in September. He died on December 14, 1873, in Sidney, Nebraska, at the age of 33. He was buried at Cheyenne, Wyoming, at the Lakeview Cemetery.

His wife would later marry Rensselaer Schuyler Van Tassell, to whom he had sold his ranch holdings.

The ghost town of Jay Em, Wyoming, is named for his cattle brand.