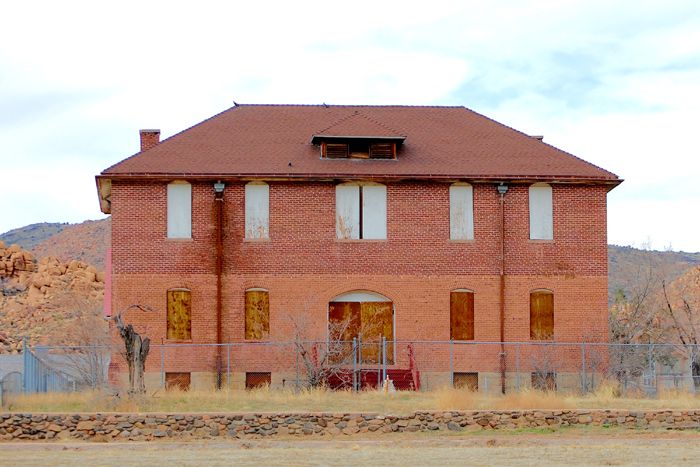 Valentine, Arizona is a ghost town located on Route 66 in Mohave County about 9.5 miles southwest of Truxton.

When the Atchison, Topeka & Santa Fe Railroad came through the area in 1883, a siding was built that was called Truxton. (The town of Truxton to the northeast wasn’t established until 1951.)

The tiny unincorporated community was established in 1898 when 660 acres were set aside for the Native Americans. In 1901, the two-story Truxton Canyon Training School began to be built that would serve as a day school for the nearby Hualapai Indians and a boarding school for children of the Apache, Havasupai, Hopi, Mojave, Navajo and Papago tribes. At this time, education was central to the United States Indian policy, which worked to “assimilate” Indians into American culture. The school opened in 1903. Like other Indian schools during this period, Truxton was an industrial training institution.  Students spent some time each day in academic classes.  During the remaining hours, boys practiced a trade while girls learned domestic skills.

In 1901, the community gained a post office, which was also called Truxton. In 1910, the town and post office were renamed Valentine, after Robert G. Valentine, who served as the Commissioner of Indian Affairs from 1909 to 1912. The National Old Trails highway passed through Valentine in the 1910s, providing a steady flow of travelers. In 1926, this road would become Route 66. 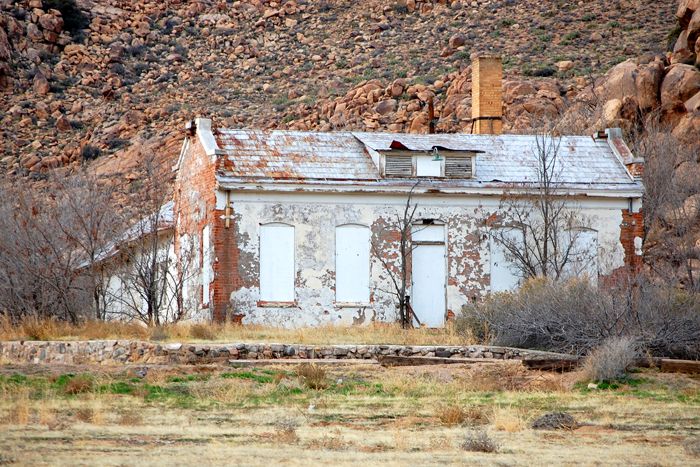 The “Red Brick School” in Valentine, Arizona by Kathy Weiser-Alexander.

Surrounded by an agricultural landscape, a dozen or so buildings once stood on the school grounds. In 1937, shortly after a Hualapai day school opened in nearby Peach Springs, the Truxton Training School closed and many of its buildings were demolished. Only the two-story brick schoolhouse remains now. It was listed in the National Register of Historic Places in 2003. Over the 36 years of its existence, it educated around 750 students.

The Red Schoolhouse remained open for area students until 1969. 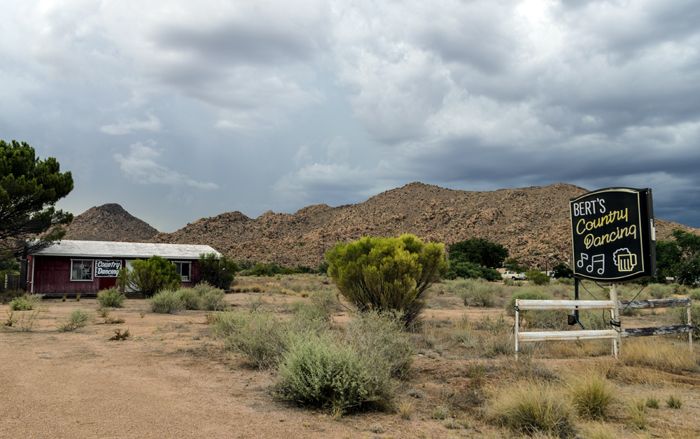 Before I-40 bypassed this old stretch of the road in 1978, Valentine was called home to several hundred residents. Both locals and travelers alike often stopped at Bert’s Country Dancing Bar for a little two-steppin’ and a couple of brews.

It was also during Valentine’s better days that thousands of Valentine cards and messages would flood into the tiny contract post office for its heart-shaped postmark. That too ended when tragedy occurred on the afternoon of August 15, 1990. Unfortunately, even in the smallest of towns, murder and mayhem can be found. On that day, 44-year-old Jacqueline Ann Grigg was working when a short stocky white man robbed the post office of its cash and left poor Jacqueline dying on the floor from a gunshot wound. Before long, Jacqueline’s husband bulldozed the building and left the area. The Valentine postmark was retired to the Kingman post office, where you can still get your special cards postmarked with the heart-shaped cancellation. 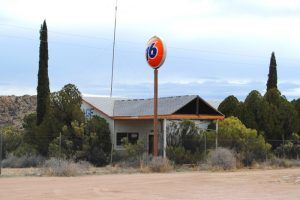 Old 76 Service Station in Valentine, Arizona. It was here that the post office was stood. Photo by Kathy Weiser-Alexander. 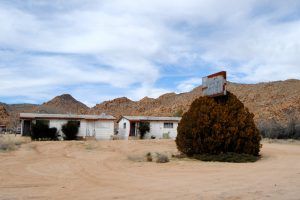 An old motel in the Valentine, Arizona area by Kathy Weiser-Alexander.

Today, the Valentine area is called home to only about 36 people. Remnants of Valentine’s better days can still be seen in the area including old service stations and motels.

Route 66 travelers can continue their journey westward for about five miles to the old mining town of Hackberry.