Hackberry. Arizona, an unincorporated community located on Route 66 in Mohave County, got its start as a silver mining town in 1874. With very few residents and numerous abandoned buildings today, it is a virtual ghost town, but, because of Hackberry General Store, filled with relics of a simpler time, it remains a popular destination for Mother Road travelers. 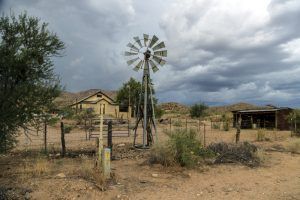 An old ranch in Hackberry, Arizona by Carol Highsmith.

Hackberry’s origin dates back to 1874 when prospectors set up a mining camp on the east side of the Peacock Mountains. After having discovered rich deposits of silver, the Hackberry Silver Mine was soon established and named for a large Hackberry tree growing near a spring adjacent to the mine. Prospector Jim Music helped develop the Hackberry Silver Mine in 1875 and after various metals were discovered, a town developed with a population that fluctuated with commodity prices. However, before long, the valuable ore warranted a 5 stamp mill, which quickly doubled its capacity. Reportedly, this rich vein was about 40 feet in width, amounting to large amounts of silver being taken from the mine.

When the Atlantic & Pacific Railroad (later known as the Atchison, Topeka & Santa Fe Railroad) came through in 1882, a right-of-way to build a transcontinental railroad was granted, and construction through northern Arizona was completed in 1883. At this time, the small settlement of Hackberry moved some four miles from its original site. 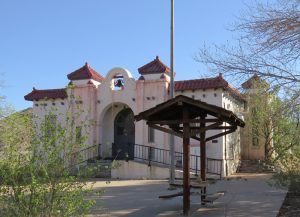 The “new” town of Hackberry became an important loading point for large cattle shipments, soon ranking third in the state in volume shipped. Between the cowboys, the miners, and railroaders, the transient town inevitably boasted its share of shooting, fighting, and gambling. Today, Hackberry is the oldest town along this old stretch of the road.

In 1917 a large mission-style elementary school was built at the new townsite. The school had two classrooms, two bathrooms, a kitchen and living quarters for a teacher. However, just two years later, infighting between the mine’s owners resulted after the ore was beginning to be depleted, which resulted in litigation. Though the Hackberry Silver Mine earned almost three million dollars in silver production, it closed in 1919. Afterward, Hackberry briefly almost became a ghost town.

However, it was revived when Route 66 came through and became a bit of a tourist town, which served travelers with various businesses. John Grigg operated a Union 76 service station on Route 66 from the 1920s until his death in 1967. The Northside Grocery and its Conoco station were established in 1934 and continued to operate until 1978. 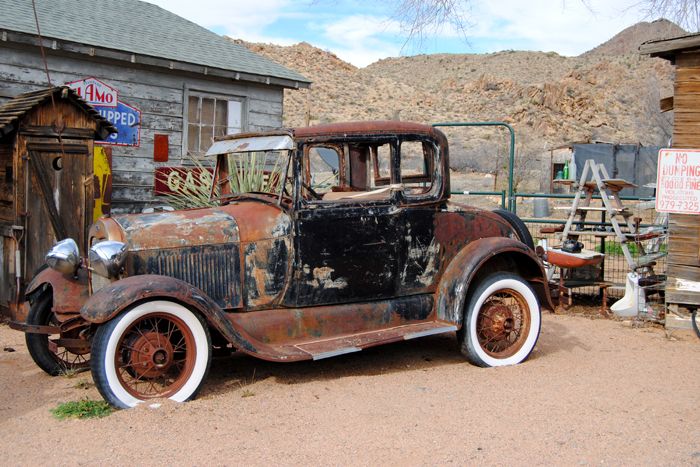 An old car at the Hackberry Store in Arizona, by Kathy Weiser-Alexander.

The town hung tight until I-40 bypassed the entire 69-mile northern loop between Seligman and Kingman, leaving Hackberry stranded 16 miles from the new highway, without an off-ramp.

Hackberry then declined again, but members of the Grigg family have lived there since the 1890s, continue to live there today.

In 1992, artist Bob Waldmire re-opened the Hackberry General Store as a Route 66 tourism information post and souvenir shop on the former Northside Grocery site. In 1994, the grade school closed, at which time students were bussed to Kingman. 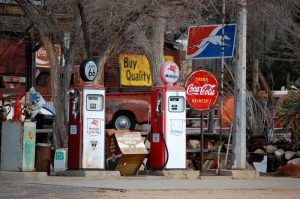 Gas Pumps at the Hackberry Store by Kathy Weiser-Alexander. 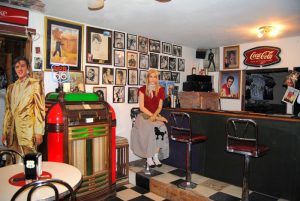 Inside the Hackberry Store, Kathy Weiser-Alexander.

Waldmire sold the Hackberry store to John and Kerry Pritchard in 1998. It remains in operation today with a collection of vintage cars and Route 66 era memorabilia. Though there’s no gas to be purchased here, vintage gas pumps adorn the front, as well as a plethora of classic signs and hundreds of pieces of memorabilia. Inside, the store is a virtual museum, where visitors can walk through a vintage diner and see a lifetime collection of Route 66 history, as well as purchasing all kinds of Mother Road souvenirs. For photographers, the store and grounds are an artistic dream come true.

The Hackberry Store sits right on Route 66, but the townsite itself lies across the tracks to the south. Here can be seen the old mission style school, the tiny post office, and a few houses amongst several old vehicles and rusting tanks and equipment.

In recent years, there has been talk of reopening the Hackberry Mine, or, at the very least, allowing new exploration of the rich vein of silver. 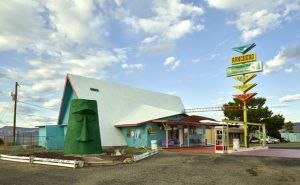 Route 66 continues for 26 miles to Kingman. Along the way, travelers can see a few old relics of Route 66 including the colorful old Ranchero Motel at Antares, which now serves as store and souvenir shop.