A collage of colorful Seligman, Arizona, by Kathy Alexander.

Seligman, Arizona, one of the most colorful places on Route 66, is located on the northern border of Yavapai County.

When pioneers along the Beale Wagon Road passed through this area in the mid-19th century, it was known as Mint Valley. Later, when the Prescott & Central Arizona Railroad planned to connect the area to Prescott in 1886, the settlement was called Prescott Junction. Completing the tracks, the train had to run backward to Prescott Junction because there wasn’t a turntable in Prescott.

Before long, the Railroad went out of business, shutting down the junction. However, the Atchison, Topeka & Santa Fe Railroad took over the abandoned rail line, and the town changed its name to Seligman in honor of the Seligman brothers, who helped finance the rail line south. 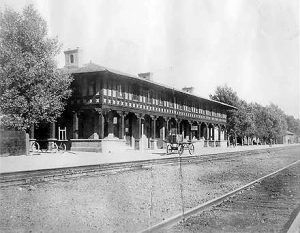 As railroad traffic increased, the Havasu Fred Harvey House was built. The hotel was opened in 1905 and included 60,000 square feet, housing numerous hotel rooms, a large kitchen, a lunchroom, and a newsstand.

Abandoned by the railroad years ago, the building continued to stand for years, but by 2007 it was in danger of being demolished. According to federal regulations, any occupied building must be a safe distance from active railroad tracks, which the building was not deemed to be. By this time, the building was owned by the Burlington Northern Santa Fe Railway, who made plans to demolish the building in 2008. Though locals and Route 66 preservationists actively worked to save the building, the “Save the Seligman Harvey House” campaign lost the fight, and the building was demolished in May 2008. 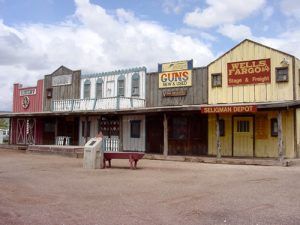 At the turn of the 20th century, Seligman was populated primarily by cowboys working the large ranches of the area. Along with these rough and ready men came a piece of the Wild West, complete with shootouts on the streets.

At this time, the saloons and brothels outnumbered the churches three to one. Over the years, Seligman settled down, but today it is still populated by people working at some of the state’s largest ranches.

When Route 66 came through, Seligman accommodated the many travelers with numerous motor courts and services, substantially boosting the town’s economy.

In the late 1970s, Seligman was bypassed by I-40, and then, in the mid-1980s, the Santa Fe Railroad closed its operations in the city.

Both were tremendous blows upon the small town, and it soon came to a slow crawl. However, with the enthusiasm of Seligman’s residents, the town has been well preserved, and the town has again become a popular destination for Route 66’ers. 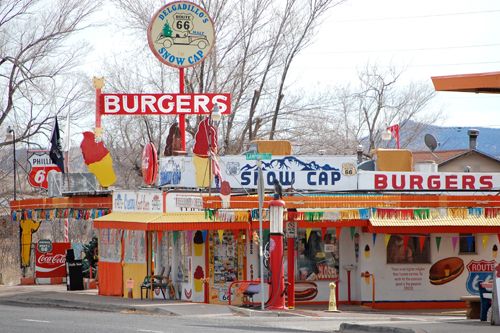 Today, a visit to this small city is a step back in time, where you will see an odd mixture of cattle ranching, truck drivers, and Mother Road icons. 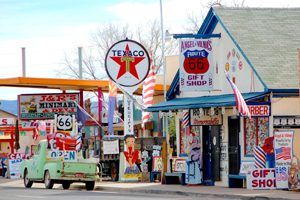 Delgadillo’s Gift and Barber Shop on Route 66 in Seligman, Arizona by Dave Alexander.

Be sure to stop by Delgadillo’s Route 66 Gift Shop and Visitor’s Center and pick up a Walking Tour Guide to Historic Seligman, which will give you a glimpse of the colorful history of the once-thriving railroad town.

Just east of the Visitor’s Center is the “must-see”  Delgadillo’s Snow Cap Drive-In at 217 E. Route 66. A Mother Road landmark through the ages, you’ll enjoy great road food and a little humor always “served” up at the Snow Cap.

There are numerous other interesting photo opportunities in Seligman, including the Rusty Bolt Souvenir and Gift Shop at 117 E. Route 66. Here, you’ll find some great souvenirs and many old cars and crazy mannequins to welcome you.

At 123 E. Route 66 is the Return to the 50’s Museum and Gift Shop, which occupies an old gas station that closed in 1985. Also, check out the Old West Town and The Roadkill Cafe a bit further down the highway.

Today, Seligman is called home to about 450 people. 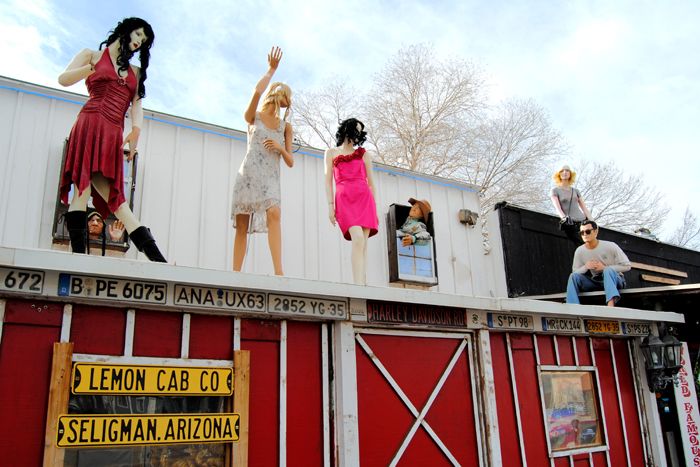 The Rusty Bolt in Seligman, Arizona by Kathy Weiser-Alexander.

From Seligman, you will head west along the longest unbroken stretch of Route 66, where you can stop at Grand Canyon Caverns to see what the earth is like 21 stories below. From there, you’ll soon come upon the vintage towns of Peach Springs, Truxton, Valentine, and Hackberry.

Benjamin Hager, with the Las Vegas Review-Journal, produced this 4-minute video with Angel Delgadillo telling the story of how Seligman came back to life after the Interstate bypassed this Mother Road Town

The Angel of Route 66 from Benjamin Hager on Vimeo.