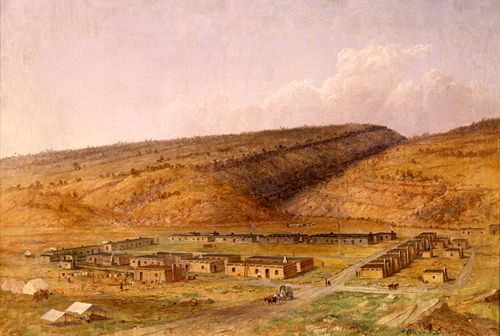 Fort Defiance, Arizona, was established in the Fall of 1851 by troops led by Colonel Edwin V. Sumner.

The post was the first to be built within the Mexican Cession (1848) in Arizona Territory. After the failure of several treaties with the Navajo, the fort’s purpose was to “control” the restive tribe. The sod and log fort was situated on land that had great value to the Navajo, which naturally made the indigenous people immediately angry, especially when the U.S. Army restricted Navajo horses and sheep to graze on the land surrounding the fort.

Though not happy about the fort’s location, the Navajo accepted the situation and initially got along with the troops. Traditional among the Navajo was often holding horse races, and they soon began to include the fort in their events, competing against the soldiers.

However, this changed in 1856, when a U.S. soldier tripped a horse during one of the races. Accusing the soldiers of cheating, the Indians were incensed, and as the troops began to back into the fort, they opened fire, killing about 30 Navajo. This event instigated a wave of intermittent attacks and skirmishes that would last until 1863.

On the morning of April 30, 1860, more than 1,000  Navajo warriors under the combined leadership of Manuelito and Barboncito attacked the fort, nearly succeeding in overrunning the garrison before being repulsed. However, the garrison of soldiers of the First U.S. Infantry, under Captain O.L. Shepherd, were able to drive them off. In the end, one soldier was killed, and three others wounded. The Navajo fared worse, with around 20 of them killed.

When the Civil War broke out, Fort Defiance was abandoned in favor of Fort Fauntleroy (later Fort Wingate) in 1861. However, when the Navajo continued to raid settlements, Brigadier General James H. Carleton ordered Kit Carson to solve the Navajo problem by removing them from their native lands and forcing them to relocate to the Bosque Redondo at Fort Sumner, New Mexico. Carson, however, disagreed with Carleton’s tactics and tendered his resignation in February 1863. But, Carleton refused to accept the resignation and ordered Carson to make war on the  Navajo Indian tribes, destroying their fields, orchards, houses, and livestock. During this time, Carson and his men occupied Fort Defiance, which often served as a “concentration camp” for the captured  Navajo.

In the end, the Navajo were defeated, and in the spring of 1864, some 8,000 men, women, and children were forced to make the 300-mile trek to the Bosque Redondo, known as the Long Walk of the Navajo. As many as 300 died along the way and many more during the next four years of their imprisonment.

In the meantime, Fort Defiance was again abandoned, and most of it was destroyed by the few remaining renegade Indians who had not been captured. 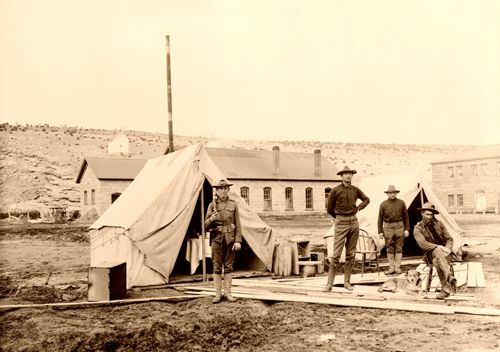 In 1868, the government finally agreed that the Bosque Redondo reservation was unsuccessful, and the Navajo were allowed to return to their homelands, though their territory had been much reduced. Fort Defiance was then selected as the site for the  Navajo Indian Agency. The buildings were repaired, and the development of the agency began.

The first school was established in 1870 in an abandoned adobe building but was short-lived. A mission, established the following year also failed. Services for the Indians were slow and haphazard over the next decade, with medical service not beginning until 1880 and an Indian Boarding School established in 1883.

Agency also “serviced” the Hopi until 1899, when a separate agency was established. Over the next decade, four new agencies were set up to cover the large area of Navajo country. In 1936, the agencies were centralized at Window Rock, Arizona, which would later become the Capitol of the Navajo Nation.

The town of Fort Defiance, which grew up around the old fort, now supports about 4,000 people. A  Navajo tribal school and hospital occupy the old fort site. Fort Defiance is located at the mouth of Canyon Bonito in Apache County, about seven miles north of Window Rock, Arizona.

Arizona Forts of the American West