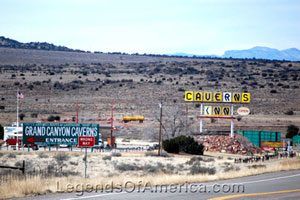 Never judge a book by its cover is an old adage easily applied to many places scattered along Route 66. However, there are few places where it is more fitting than Grand Canyon Caverns west of Seligman, Arizona.

As you pull into the dusty parking lot where battered monuments to America’s automotive heritage bask under an Arizona sun, the first impression is that this was once a grand roadside resort now fallen on hard times. However, time spent on a caverns tour, savoring a slice of homemade pie in the restaurant, playing nine holes of miniature golf in the shadow of towering dinosaurs, or simply lounging in front of the motel will reveal that this initial impression is one part carefully crafted illusion and one part a fact that the passionate owners are working to reverse.

The caverns, as locals refer to the resort, is a microcosm of Route 66 evolution from concept inception to renaissance. As an example, Route 66 was born of the good roads movement that gave rise to the National Old Trails Highway, and segments of the pioneering highway with original stone infrastructure are located a short distance to the east of the caverns natural entrance. 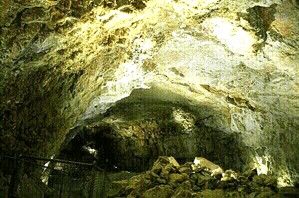 That highway was quite popular during the infancy of the road trip, a truly American past time that linked a passion for the automobile with the national quest for adventure. In 1914, it served as the course for the last of the great Desert Classic races derisively dubbed the “Cactus Derby” by journalists. That race coursed from Los Angeles, California to Ash Fork, Arizona before turning south toward the finish line in Phoenix, and featured two of the top names in motorsports at that time, Louis Chevrolet and Barney Oldfield.

This would also be the road followed by Edsel Ford in the summer of 1915 as he and friends journeyed west from Detroit to the Panama-Pacific Exposition in San Francisco via the Painted Desert and the Grand Canyon.

“Williams, Arizona, Thursday, July 15, 1915 – Found Cadillac and Stutz crews at Harvey Hotel at Williams waiting for us. All got supplies at garage. Talked to Ford Agent. Got going about eleven. Had lunch at Ash Fork. Loafed along; found it very hot. Bought some gas and oranges at Seligman. Stutz broke another spring about 15 miles out and returned to Seligman. Cadillac and Ford went on to Kingman, arriving at midnight, Brunswick Hotel. Very rough and dusty roads. Wired Los Angeles Branch for axle parts. Day’s run 146 miles.”

As an attraction, the caverns themselves date to late 1926, the year of certification for U.S. 66. Legend has it that itinerant cowboy named Walter Peck was taking a short cut to a local poker game when he stumbled on and almost into the entrance. After an initial exploration of the cavern, Peck decided to capitalize on his discovery. For ten cents, later a quarter; he would provide tourists with a lantern and lower them into the cavern by rope using a hand crank winch. Among friends, he dubbed this dope on a rope. A replica of his contraption stands in front of the caverns visitor center and restaurant.

Route 66 itself ran a mile or so from “Yampai Cavern” but some innovative marketing and promotion ensured a steady flow of customers. In 1936, utilizing used lumber from the Hoover Dam project northwest of Kingman, a staircase and swinging bridge provided easier access. Following this improvement was the development of a trail system and a name change to Coconino Caverns. 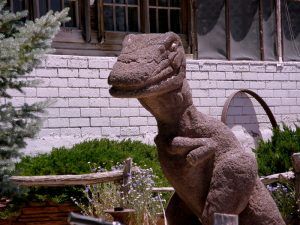 World War II and gas rationing brought tourism traffic to an almost complete standstill. There were, however, bored GI’s at the Kingman Army Airfield some sixty miles to the west and the cavern remained an income producer for owners.

The post-war surge in tourism and the golden age of Route 66 in the 1950s gave rise to a dramatic transformation of the caverns complex. Indicative of its prominence as an attraction is the four-lane segment of the highway at the entrance to the property; aside from urban corridors in communities such as Williams and Winslow, this was the only multiple lane segments of Route 66 between Albuquerque and Los Angeles.

A name change to Dinosaur Caverns and the addition of a motel, service station, and lounge reflected the growing popularity of the caverns. The addition of an elevator salvaged from a demolition project in Phoenix and an emergency exit metal staircase salvaged from a New York City demolition project relegated the old wooden stairs and bridge to attraction on the cavern tour. By 1962, the year that the name changed to Grand Canyon Caverns, the complex was experiencing a dramatic transition. Soon the complex consisted of two restaurants, a forty-eight room motel, a service station that never closed, and a gift shop, as well as a storage depot for Civil Defense supplies as the caverns were designated an official fall out shelter. There were also a rodeo grounds and an airstrip. 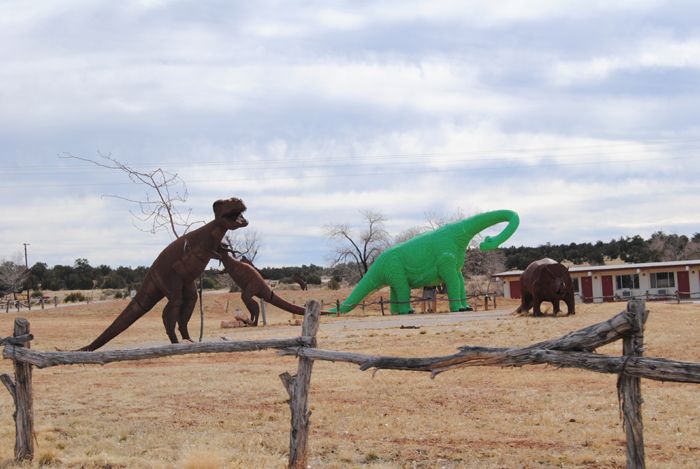 Next to the Grand Canyon itself, this was the most visited attraction in the state of Arizona. Still, with the completion of I-40 and the bypass of Route 66 between Seligman and Kingman in 1978, business plummeted. The caverns remained open, but one-by-one, components closed; first one restaurant and then the lounge. The service station and garage followed. Upkeep and maintenance became a hit and miss proposition, and the motel manifested this. 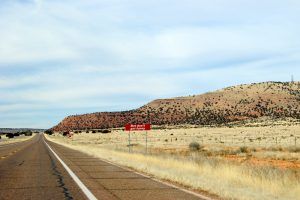 Fast forward a few years. The resurgent interest in Route 66 sparked an international renaissance. Once again, traffic began to flow along Route 66. The caverns resort complex, however, languished. There was a question if the renewed interest in Route 66 and its roadside gems came too late.

Enter John McEnulty, a Los Angles printer with a passion for hiking into Supai and the Grand Canyon. The ideally located Grand Canyon Caverns Inn served as his base camp for these adventures. With each visit, he witnessed the growing toll inflicted by indifferent owners, and years of neglect. 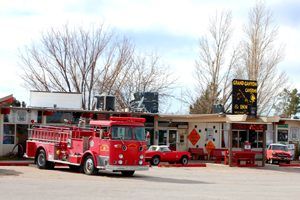 His attachment to the resort itself and fond memories of childhood vacations that included stops at places just like this initially sparked the desire to own the complex. The ever-growing popularity of Route 66 and the history of the complex associations with that highway fueled thoughts that, perhaps, a new lease on life for the resort might be possible.

With an infectious smile, investors, a passionate zeal, and the help of his son Sean, McEnulty began turning back the hands of time while commuting to Los Angles to fulfill the obligations of the regular job. As renovations commenced, John set his sites on 1964, which was the year he selected for freezing the resort in time.

Every week John commutes to the caverns. Every week a renovation turns back the hands of time. Each week the addition of a metal sculpture, a well-worn old car that fosters the illusion of this being a timeworn roadside relic, an addition to the eclectic museum, or a change in the menu reflects his unleashed imagination and unbridled enthusiasm for the old resort, and breathes new life into the caverns complex. All of this, however, is only the beginning of a new chapter at Grand Canyon Caverns. 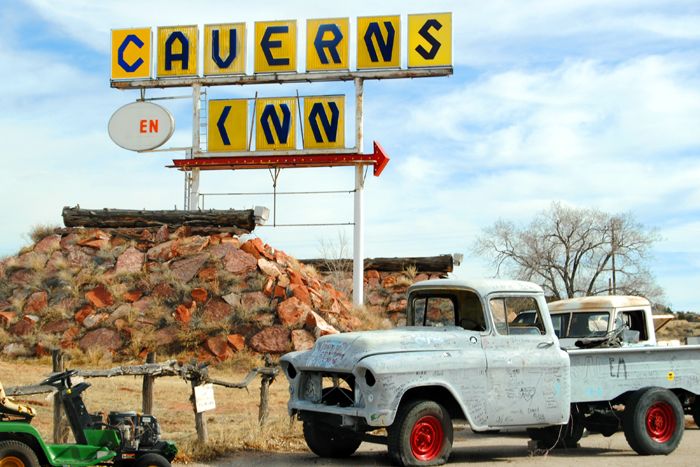 The recent discovery of new levels in the caverns, and plans to open them for tours in the fall of 2016 are but one of many exciting new developments. Trail rides, wagon rides, disc golf course, ghost walk tours in search of Walter Peck, and the quirky but challenging miniature golf course among the towering dinosaurs and the golf cart graveyard are another. Likewise, with the fully updated and renovated RV park that recently garnered accolades from Good Sam, or the Caverns Suite, the world’s deepest hotel room.

The ever-increasing popularity of Route 66 and McEnulty’s visionary stewardship ensure that the Grand Canyon Caverns will become a destination for a new generation of enthusiasts. That includes the bicyclists taking advantage of Adventure Cyclist recent designation of the double six as a bicycle-friendly highway, or the electric vehicle owners who stop to charge batteries while touring the caverns as they venture toward Kingman, home of the world’s first electric vehicle museum.

Grand Canyon Caverns today is a delightful time capsule where the past, present, and even the future of Route 66 flow together seamlessly. It is also refreshing little oasis at the heart of a vacation paradise, and a wonderful place for beginning an adventure along the 160-miles of smiles that is Route 66 in western Arizona where the longest uninterrupted segment of that storied highway flows to the Colorado River.

So, the next time you motor west and choose the highway that is the best, add a stop at the caverns to your itinerary. And, if the schedule allows, check into the Caverns Inn, get your key, and step back to 1964 as you settle into a clean, comfortable pleasant little time capsule for a restful night’s sleep. 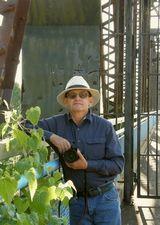 ©Jim Hinckley-Legends Of America, updated May 2019.

About the Author – Jim Hinckley is an award-winning author and photographer, and an official contributor to Legends Of America through a partnership developed in October 2012. Hinckley is a former Associate Editor of Cars and Parts Magazine, and author of multiple books, including several on Route 66.  His latest “The Route 66 Encyclopedia” is available with autograph via Jim Hinckley’s America.