Black Canyon Hill – Once a dangerous spot on the old stage road, numerous holdups took place here. Some of this ill-gotten cache is said to be buried in the area. Black Canyon Hill is located 38 miles south of Prescott on Highway 49.

Chino Valley – An early prospector in Chino Valley, about 20 miles north of Prescott, is believed to have buried a large number of gold coins and nuggets somewhere in or near his cabin before he died. The treasure has never been recovered. 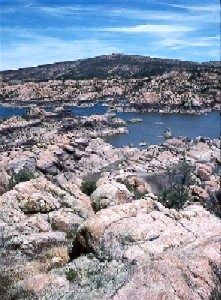 Granite Dells – In the 1800s, a party of successful prospectors were returning from the Big Sandy River to Prescott with a load of gold dust and nuggets held in several canvas bags. Taking a rest and water break at Granite Dells, about four miles north of Prescott, they were soon attacked by Indians.  Quickly, the prospectors buried the gold near the spring as the attack ensued.  All but one of the prospectors were killed by the Indians.  Later, the lone survivor would return to the site with a search party on several occasions.  However, they never found any signs of the buried gold.  Some have speculated that the Indians dug up the treasure and reburied it somewhere else in the same area. In any case, the treasure remains somewhere in the Granite Dells waiting for discovery.

Kneeling Man Boulder – According to legend, a treasure chest containing an estimated $100,000 in gold was buried by miners being pursued by a group of hostile Indians in the late 1800s.  Escaping from their pursuers, they traveled about the area, burying the gold along the way as the Indians followed them in hot pursuit.  All but one of the miners succumbed to exhaustion and dehydration. However, one man, who was also dying, lived long enough to tell the tale.  The burial site is said to be near a spring at the foot of a mountain near Prescott.  Buried under a boulder shaped like a kneeling man, a nearby tree was marked with a cross above a half circle just a few feet away.  Even though the landmarks were located, the gold has never been recovered. 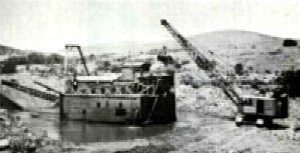 Mining continued at Lynx Creek, Arizona until the 1940s.

Lynx Creek – Located in the northern Bradshaw Mountains east of Prescott, Lynx Creek yielded well over 80,000 of gold between 1863 to 1940.  At one time nuggets weighing 4 ounces and bigger were found in its headwaters near Walker. In 1864, miners struck a rich placer deposit washing out about $30,000 in nuggets.  These were soon packed into buckskin pouches as the miners traveled home.  However, they were soon attacked by two Indians who left the prospectors dead and headed for the mountains with their gold.

However, within just a few short hours, a posse was sent after the thieving Indians and they were killed about ten miles from where they had attacked the miners.  Though they searched diligently, the posse did not find the gold that was taken.  It is believed that the gold was hidden by the Indians after it was taken, somewhere in the vicinity of Lynx Creek. Today, gold continues to be found in the creek in small quantities.  However, beware as the use of motorized equipment is prohibited.