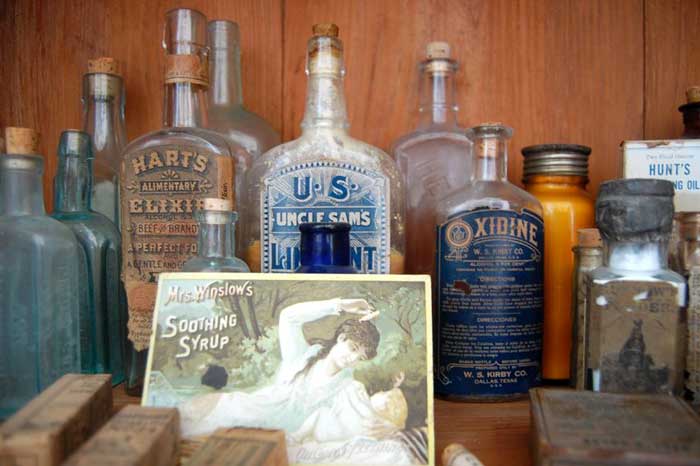 In the late 19th and early 20th centuries, “patent medicine” became very popular for a variety of aches, ailments, and diseases. Often sold by traveling salespeople in what became known as “medicine shows,” these many decoctions had colorful names and even more colorful claims. Despite the name, “patent medicine,” these elixirs and tonics were rarely patented, with the exception of a few including Castoria, and instead were often trademarked. In fact, chemical patents did not come into use in the United States until 1925. 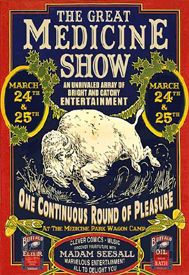 Also called “proprietary medicines,” these elixirs and tonics originated in England and were manufactured under grants, or “patents of royal favor,” to those who provided medicine to the Royal Family, hence, the name. In the 18th century, these medicines began to be exported to America and were sold by a variety of merchants, including grocers, goldsmiths, drugstores, and even postmasters.

Flourishing in the United States from the start, by the middle of the 19th century, the manufacture of patent medicines was a major industry in America.

Produced by large companies as well as small family operations, there were remedies for almost any ailment including venereal diseases, tuberculosis, infant colic, digestive problems, “female complaints,” and even cancer. These many remedies were openly sold to the public in retail stores, by individual salesmen, and in what would develop into the traveling medicine show.

The promotion of patent medicines was one of the first major products heavily displayed in the early advertising industry. During this time, numerous advertising and sales techniques were pioneered by patent medicine promoters. Often, these advertisements would promote exotic ingredients, even when their actual effects came from more common drugs. “Branding” of products became popular at this time in order to distinguish one medicine from its numerous competitors. Though most patent medicines were sold at high prices, they were generally made from cheap ingredients. Pharmacists, who knew the composition of these remedies, would often manufacture similar products and sell them at lower prices. To counteract this, branded medicine advertisements urged the public to accept no substitutes.

One popular group of patent medicines – liniments and ointments – often promoted themselves as containing snake oil, which was thought to have been a cure-all at the time. This would eventually lead to the use of the term “snake oil salesman,” a lasting synonym for a charlatan. 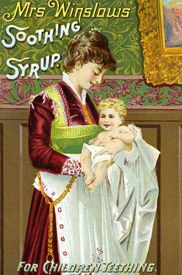 These medicines were very popular, even though many of them were laced with ample doses of alcohol, morphine, opium, or cocaine and were advertised for babies and children, sometimes ending in tragic results. With no regulation on their often questionable ingredients, concerns began to grow about these medicines. Their effectiveness was also questionable and ingredients usually kept secret, leading to them being referred to as “quack” medicines. Just a few instances of high alcohol levels included Lydia Pinkham’s Women’s Tonic, which contained 19% alcohol; Dr. Kilmer’s Swamp Root was 12 %, and Hostetter’s Bitters, an amazing 32%.

From the beginning, many doctors and medical societies were critical of patent medicines, arguing that they did not cure illnesses, discouraged the sick from seeking legitimate treatments, and caused alcohol and drug dependency. More fierce resistance came from the temperance movement of the late 19th century, who loudly protested the use of alcohol in medicines.

Resisting these criticisms, manufacturers established an organization for themselves called “The Proprietary Association,” in 1881. The trade group of medicine producers, aided by the press, which had grown dependent on the money received from remedy advertising, fought bitterly against any type of regulation. However, in the end, their resistance would be overcome by the demand for safety, and in 1906, the Pure Food and Drug Act was enacted, which required manufacturers to list their ingredients on packaging labels and restricted misleading advertising. Later, in 1938, another law required that manufacturers test their products for safety before marketing them; and in 1962, tests for effectiveness were required. 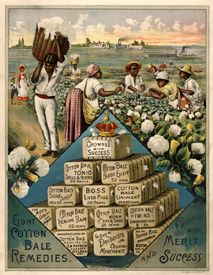 Though many patent medicines were only a ruse, there were a few legitimate ones that delivered the promised results such as Listerine, which was developed in 1879, Bayer Aspirin in 1899, Milk of Magnesia in 1880, Ex-Lax in 1905; and Richardson’s Croup and Pneumonia Cure Salve in the 1890s, which is now known as Vick’s VapoRub.

Another method of publicity taken to sell these many patent medicines was the ever-popular “Medicine Show,” which sometimes resembled a small traveling circus, complete with vaudeville-style entertainment, “Muscle Man” acts; magic tricks, and Native American and Wild West themes. These shows had their origins in the performances put on by traveling charlatans in 14th century Europe when circuses and theaters were banned and performers had only the marketplace or patrons for support. Later, in Colonial America, patent medicine vendors would set up booths at local fairs. As early as 1773, laws were being passed against their excesses. By the late 19th century, Medicine Shows flourished in the United States, especially in the Midwest and in the rural South.

The Medicine Man, often called “Professor,” or sometimes “Doctor,” was generally neither; but rather, was a talented showman and storyteller. With the “Professor” at the center, these medicine shows were often structured around entertainers who could be expected to draw a crowd of potential customers who would listen to, and then purchase, the “miracle elixirs” offered by the “doctor.” 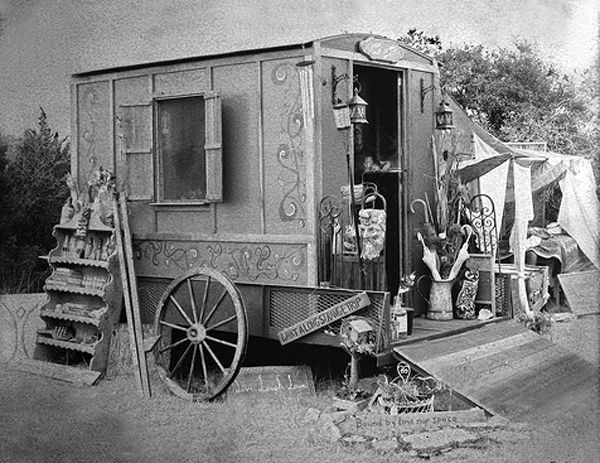 Much ado was made prior to these events, such as posters and banners displaying the time and place of the show and tickets of admission. Sometimes these “shows” were so large, that halls or hotels were booked for the troupes of entertainers, which might be enacted several times throughout the day and evening. However, most often, they were held right on the street, hopefully attracting every passerby. Often, these remedies and elixirs were manufactured and bottled in the same wagon in which the show traveled.

Between entertainment acts, the “Professor” would lecture the crowd about his miraculous elixir, mixing grandiose claims with interesting anecdotes and stories. Often the audience was encouraged to join in with singing entertainers. “Muscle man” acts were especially popular in these shows, in order to impress the crowd with the strength and vigor he obtained from a particular potion. During these presentations, the “Professor,” frequently employed shills, who would step forward from the crowd and offer “unsolicited” testimonials about the benefits of the medicine for sale. Other “plants” within the audience, who had an obvious affliction, such as a limp, would shuffle forward and challenge the “Medicine Man” and his claims. Amazingly, after the “Professor” gave the individual a teaspoon of his “magical elixir,” the rube was suddenly cured. Though many, no doubt, knew that these antics were a bit unbelievable, they wanted to believe that this particular cure really worked. 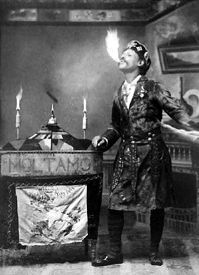 In addition to the “Mom and Pop” operations that wound their way through small towns and rural areas with their “Medicine Wagons,” there were several large manufacturers, that presented “Medicine Shows” in a big manner. The most well-known of these was the Kickapoo Indian Medicine Company. Headquartered in New Haven, Connecticut, far away from the  Kickapoo tribe, who primarily lived on a reservation in Oklahoma at the time. Founded by non-Native Americans, John E. “Doc” Healy and Charles H. “Texas Charley” Bigelow, the pair called their large headquarters building “The Principal Wigwam.” This building served as both a factory and living quarters for employees, as well as housing offices for the two owners. In 1881, Doc Healy, who owned a brokerage house in Boston, got the idea of promoting medical elixirs using Indian names and the following year, took on his partner, Charles Bigelow. Healy was in charge of hiring the performers – both Indians and white performers that included jugglers, acrobats, dancers, musicians, fire-eaters, and more. Texas Charley managed the medicine side of the business; as well as the “Doctors” or “Professors” who gave “Medical Lectures.” 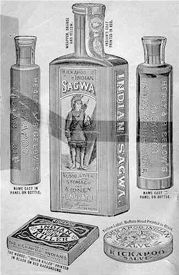 These two partners would send as many as 25 shows at a time across the country. During the shows, all the entertainers were in flamboyant costume, the  Native Americans covered in feathers, colored beads, and often carrying crude weapons. The “Professors” often wore tuxedo style jackets, high silk hats, and clothing that displayed gold studded buttons, glitter, silk, fringe and more.

According to the advertisements and the “professors,” the medicines sold were “compounded according to secret ancient  Kickapoo Indian tribal formulas.” In fact, ingredients often did include herbs that were used by  Native Americans, including bloodroot, feverwort, poke, slippery elm, oak bark, and other natural products. Selling for 50 cents to a dollar per bottle, these medicines guaranteed to cure all manner of ailments.

Company shows featured Native American-style entertainment including horseback riding, Pow Wows, dances, and invocations to various spirits in darkened tents. One popular product was Kickapoo Indian Sagwa, which was touted as a Blood, Liver, and Stomach Regulator. This was said to have been based on a Native American Herbal Remedy; but, in actuality, it was a mixture of alcohol, stale beer, and a strong laxative such as aloe. The Kickapoo Indian Sagwa would serve as the inspiration for Al Capp’s “Kickapoo Joy Juice,” featured in the comic strip, “Li’l Abner.” The company also sold several other patent medicines such as Kickapoo Indian Oil, Kickapoo Cough Cure, and Kickapoo Worm Remedy, claiming their basis in Indian herbal medicine. The benefit of claiming traditional native origins was that it was nearly impossible to disprove. 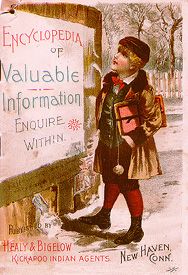 One of the most popular performers in the Kickapoo Indian Medicine Show was a man named Dr. John Johnson. Though he looked, acted, and had the knowledge of an  Indian Medicine Man, he was not of Indian heritage. However, for more than 20 years, he believed that he was.

In actuality, he had been kidnapped from Saco, Maine’s Factory Island by Mi’kmaq Indians from Nova Scotia in 1834, when he was just five years. Brought up to believe he was a member of the tribe, he learned traditional Indian medical practices and was regarded among the  Indians as a Medicine Man. Later, he was reunited with his family and studied with several American doctors, and was also regarded as a physician by the white people. Dr. Johnson would appear in many of the company’s shows.

Along with the company’s many shows and performers, they also published a variety of books and pamphlets to promote their products independently. With subjects of  Indian life and lore, these publications included such titles as Encyclopedia of Valuable Information, a 32-page pamphlet published in 1894, Life and Scenes among the Kickapoo Indians, a 176 page illustrated book in 1900, The Kickapoo Doctor, a 32-page pamphlet in 1890, and others.

Kickapoo Indian Medicine Show continued into the 1920s when its white owners sold out for almost a half-million dollars. However, other medicine shows continued for the next two decades.

The last of these traveling shows was the Hadacol Caravan, which marketed a tonic called “Hadacol”, known for both its alleged curative powers and its high alcohol content. Primarily making appearances in the south, the show was known for its notable music acts and Hollywood celebrities. The Caravan came to a sudden halt in 1951 when the Hadacol enterprise fell apart in a scandal.

Today, many medicines from the patent medicine era still survive including Anacin/Anadin, Bayer Aspirin, Bromo-SeltzerCarter’s Little Pills, Doan’s Pills, Fletcher’s Castoria, Geritol, and others. There are also a number of products that once made medicinal claims and were once marketed as patent medicines. Though their ingredients have changed, they are still on the market. These include such products as 7-Up, Angostura Bitters, Coca-Cola, Tonic water, and others. 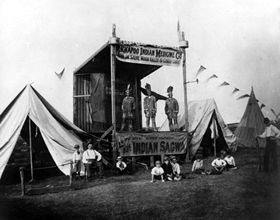