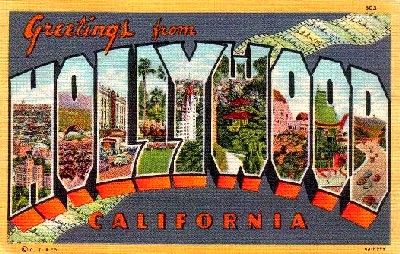 In the western section of metropolitan Los Angeles sits the famous city of Hollywood, California, known almost exclusively as the global center of movie studios and film stars.

Though the district is now home to an estimated 300,000 people, it began around 1853 with only one adobe hut. However, by the 1870s, an agricultural community had grown around the area.

In 1887 Harvey Wilcox, who had made a fortune in real estate, relocated to California from Kansas along with his wife, Daeida. They soon bought 160 acres of land west of where Hollywood would soon be born.

When Daeida Wilcox went on a trip to the East, she met a woman on the train that spoke of her country home in Ohio named after a Dutch settlement called “Hollywood.” Daeida liked the sound of it, and when she returned to Southern California, she gave the name to their ranch.

Though Wilcox had lost the use of his legs due to typhoid fever, it did not stop the ambitious real estate investor. Before long, he drew up a grid map for a town, which he filed with the county recorder’s office on February 1, 1887. Soon, Prospect Avenue, which would later be called Hollywood Boulevard, was lined with large Queen Anne, Victorian, and Mission Revival houses. Mrs. Wilcox worked with other residents to raise funds to build churches, schools, and a library. 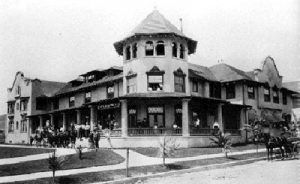 The famous Hollywood Hotel opened in 1902

Hollywood quickly became a prosperous community, sporting a post office, a newspaper, a hotel, and two markets by the turn of the century. Lying seven miles east of Hollywood, through the citrus groves, was the already well-established city of Los Angeles. A single-track streetcar connected the two cities, but service was infrequent, and the trip took two hours. An old citrus fruit-packing house was soon converted into a livery stable, improving transportation for the inhabitants of Hollywood.

The famous Hollywood Hotel, the first hotel in Hollywood, was opened in 1902 by a developer selling residential lots along the foothills. The hotel’s initial objective was to house the many people that he was trying to sell to. Flanking the west side of Highland Avenue, the structure fronted Prospect Avenue, which was then just a dusty, unpaved road. Today the Kodak Theatre, home of the Academy Awards, stands where the old hotel once was.

The community was incorporated in 1903, but its independence was short-lived, as the lack of water forced annexation with the city of Los Angeles in 1910. Several ordinances were passed during its seven years as a self-supporting town, including outlawing liquor sales and driving cattle through the streets in herds of over 200.

In 1904, a new trolley car track from Los Angeles to Hollywood opened up Prospect Avenue. The system, called “the Hollywood Boulevard,” drastically cut travel time to and from the city.

The Selig Film Manufacturing Company was the first major film company to come to the Los Angeles area, shooting its first film entirely on location, entitled The Heart of A Race Tout in 1908. The Next year the film company built its first permanent film studio.

Although electric lights existed at that time, none were powerful enough to expose film adequately; natural sunlight was the best illumination source for movie production. Besides the moderate, dry climate, they were also drawn to the state because of its open spaces and a wide variety of natural scenery. 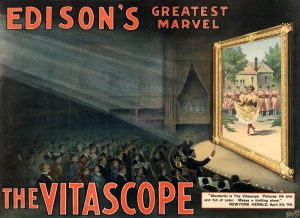 Another reason was the distance of Southern California from New Jersey, which made it more difficult for Thomas Edison to enforce his motion picture patents. Edison owned almost all the patents relevant to motion picture production at the time. In the East, movie producers acting independently of Edison’s Motion Picture Patents Company were often sued by Edison and his agents. Thus, movie makers working on the West Coast could work independently of Edison’s control. If he sent agents to California, word would usually reach Los Angeles before the agents did, and the movie makers could escape to nearby Mexico.

A second movie studio — Nestor Studios, was founded in 1911 by Al Christie for David Horsley in an old building on the southeast corner of Sunset Boulevard and Gower Street. In the same year, another fifteen independent film producers would also settle in Hollywood, replacing the lemon groves with movie sets, buildings, businesses, and homes. 1912 saw the opening of the Idyle Hour Theatre.

At about the same time, motion picture production companies from New York and New Jersey started moving to sunny California because of the good weather.

In 1913, Cecil B. DeMille and Jesse Lasky leased a barn with studio facilities on the southeast corner of Selma and Vine Streets. The location soon became known as Lasky-DeMille Barn and is now home to the Hollywood Heritage Museum.

The Charlie Chaplin Studios, on the northeast corner of La Brea and De Longpre Avenues, was built in 1917. Sid Grauman’s “Million Dollar Theatre” began entertaining the public the following year. 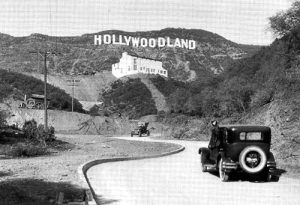 Erected in 1923, the famous Hollywood sign originally read “Hollywoodland,” advertising a new housing development in the hills above town. In the beginning, the Hollywoodland sign was lit up at night by thousands of light bulbs maintained by a man who lived in a cabin behind one of the L’s. The sign, located near the top of Mount Lee, is now a registered trademark.

The first Academy Awards presentation ceremony occurred on May 16, 1929, during a banquet held in the Hollywood Roosevelt Hotel Blossom Room on Hollywood Boulevard. Tickets were $10.00, and there were 250 people in attendance.

From about 1930, five major “Hollywood” movie studios from all over the Los Angeles area, Paramount, RKO, 20th Century Fox, Metro-Goldwyn-Mayer, and Warner Bros., owned large, grand theaters throughout the country for the exhibition of their movies. The period between 1927 (the end of the silent era) to 1948 was considered the “Golden Age of Hollywood.” However, this ended in a landmark 1948 court decision, where the Supreme Court ruled that movie studios could not own theaters where only their own movies were shown. By the mid-1950s, when television proved a profitable enterprise that was here to stay, movie studios also began to be used for television productions.

On January 22, 1947, the first commercial TV station west of the Mississippi River, KTLA, began operating in Hollywood. In December of the same year, the first Hollywood movie production was made for TV called The Public Prosecutor. In the 1950s, music recording studios and offices began moving into Hollywood. The famous Capitol Records building on Vine Street, just north of Hollywood Boulevard, was built in 1956. Its unique circular design looks a little like a stack of old 45rpm vinyl records. 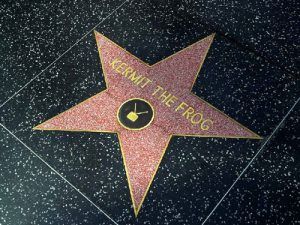 The Hollywood Walk of Fame was created in 1958, and the first star was placed in 1960 as a tribute to artists working in the entertainment industry. Honorees receive a star based on career and lifetime achievements in motion pictures, live theatre, radio, television, or music, as well as their charitable and civic contributions.

In 1985, the Hollywood Boulevard commercial and entertainment district was officially listed in the National Register of Historic Places protecting important buildings and ensuring that Hollywood’s past would always be a part of its future.

The Kodak Theatre, which opened in 2001 on Hollywood Boulevard at Highland Avenue, where the historic Hollywood Hotel once stood, has become the new home of the Oscars.

Like many other large cities, Hollywood also has its share of problems, the most significant of which is its attractiveness to desperate runaways. Hundreds of teenagers with “stars” in their eyes are fleeing broken homes across the nation and flooding the city, hoping to become famous.

Unfortunately, they learn quickly that their chances are very slim against professionally trained actors and usually end up sinking into homelessness, a major problem in Hollywood.

While some eventually go home, others stay in Hollywood, joining the prostitutes and panhandlers lining the city’s boulevards. Others wind up on Skid Row in downtown Los Angeles and yet more end up in the seamy underside of the entertainment business – the large pornography industry in the San Fernando Valley. 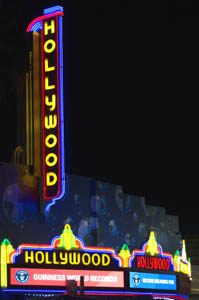 The theater-like “Hollywood” sign and marquee on Hollywood Boulevard

I love Los Angeles. I love Hollywood. They’re beautiful. Everybody’s plastic, but  I love plastic. I want to be plastic.