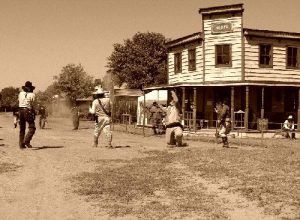 In the railroad town of Spokogee, Indian Territory, which is now Dustin, Oklahoma, the Spokogee Gunfight occurred on September 22, 1902. A feud between the Willis Brooks family and an outlaw gang headed by Jim McFarland had been ongoing for almost a decade. Willis Brooks held Jim McFarland responsible for the murder of his son, Thomas, in 1896 but could prove nothing.

Finally, the long-simmering hostilities came to a head on September 22, 1902, when Brooks rode into town with sons, Clifton and John, to pick up their mail. In the post office, the Brooks’ encountered a man named George Riddle who sided with the McFarland faction. Immediately, they began to threaten the unarmed Riddle who dashed out of the post office and ran toward U.S. Deputy Marshal Morton Rutherford, who was standing across the street.

Willis Brooks followed him out and drew his gun, at which time Rutherford commanded him not to shoot. However, Willis shot Riddle in the head, killing him instantly, then sent two more bullets into the dead man’s prone body. In the meantime, Jim and Joe McFarland, along with George Riddle’s son, Alonzo, who were also on the street, immediately began to shoot back at the Willis faction. When the smoke cleared, Willis and Clifton Brooks lay dead on the street along with George Riddle, and John Brooks was severely wounded. Marshal Rutherford promptly arrested Jim and Joe McFarland and Lon Riddle. Though all three were tried, they were later all acquitted. John Brooks recovered from his wounds and lived until the 1950s.