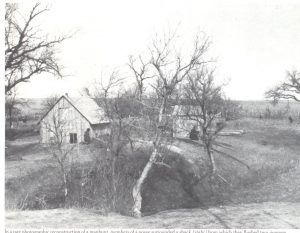 In December 1896 two men had been casing a bank in Blackwell, Oklahoma when the law got suspicious and tracked them down. On December 4, 1896, a heavily armed posse of six men surrounded a shack near Bert Benjamin’s ranch outside of Blackwell. Intending on capturing a gang of bank robbers, Deputy Sheriff Alfred Lund called to the men inside the cabin: “Throw up your hands!” Instead, the outlaws inside answered with a burst of gunfire. At this, three of the posse men immediately turned and ran. However, Lund and two other men stayed, returning fire at the desperados. When the dust settled, the posse had killed one of the robbers and wounded another.

Lund initially thought he had “bagged” a much-wanted outlaw and ex-Doolin Gang member by the name of “Dynamite” Dick Clifton, who was wanted for bank robbery and had a $3,500 reward on his head. Instead, the dead man inside the cabin who was missing a finger, just like Clifton, was a petty thief named Buck McGregg, aka: Dick Ainsley. The second wounded outlaw, Ben Cravens, was a rustler and murderer. The posse took him into custody, but he later escaped.