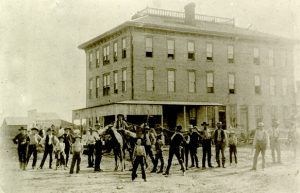 In the 1880s, when the cowtowns in Kansas thrived with beef being shipped to the east, the small town of Hunnewell sprouted up as yet another shipping point for Texas cattle. Located on the Kansas-Oklahoma border in Sumner County, the Leavenworth, Lawrence, and Galveston Railroad provided quick access to the Kansas City stockyards. During Hunnewell’s heydays, it sported a hotel, two stores, a barbershop, a couple of dance halls, and eight or nine saloons. With little more than railroad workers and cowboys, violence was not at all uncommon. As one railroad worker recollected years later, “There was no Bat Masterson to control the casual use of firearms, and there was more shooting than I ever saw in Dodge City.”

It was during this time that two cowboys named Oscar Halsell and Clem Barfoot were raising cane in Hanley’s Saloon on October 5, 1884. When two lawmen walked into the saloon and tried to quiet the disturbance, all hell broke loose with guns blazing. Who shot first is not known, but it is believed that Clem Barfoot actually fired the first round. Several shots followed, resulting in Barfoot being killed and Deputy Sheriff Ed Scotten mortally wounded.

No one was ever prosecuted, and although publicized at the time, the gunfight was soon forgotten. Oscar Halsell would go on to be a prosperous rancher, later employing such notable outlaws as Bill Doolin and George “Bittercreek” Newcomb. Halsell was also close friends to later U.S. Marshal Evett D. Nix.

Gunfights of the Frontier