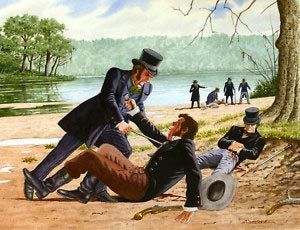 The Sandbar Fight occurred just north of Natchez, Mississippi on a sandbar in the Mississippi River on September 19, 1827. When two men, Samuel Levi Wells, III and Dr. Thomas Maddox, decided to solve their issues by participating in a duel, Jim Bowie attended as Wells’ “second.” In those days, a “second” always attended an “official” duel to ensure that the proper rules were followed. Surrounding the duelers were several spectators, including Wells supporters, Major George McWhorter and General Samuel Cuny. Supporting Maddox were his “second,” Major Norris Wright, Colonel Robert Crain, and brothers, Carey and Alfred Blanchard. Others were also gathered about to watch the spectacle, numbering about 16 men in total.

When the principles exchanged shots, neither hit the other, but all hell broke loose. From the crowd that surrounded the duel, Robert Crain fired upon Samuel Cuny, and when Cuny fell, Bowie stepped in and fired at Crain but missed.

Norris then shot Bowie through the lower chest, at which time Bowie drew his long knife, which he was known to wear, and began to chase down Wright. The Blanchard brothers then shot Bowie in the thigh, while Write and Alfred Blanchard stabbed him in several places. However, Bowie still fought back, plunging his long knife into Wright’s chest and slicing Alfred Blanchard’s forearm. Carey Blanchard then fired a second shot at Bowie then he and his brother, Alfred fled. However, Carey Blanchard was shot and wounded by Major McWhorter as he ran. 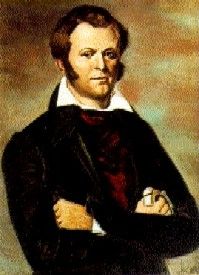 Though the Battle of the Sandbar lasted less than ten minutes, it left General Samuel Cuny and Major Norris Wright dead, and Jim Bowie and Alfred Blanchard wounded. Eyewitnesses, who remembered Bowie’s “big butcher knife,” began to spread the word of Bowie’s prowess with the lethal blade, capturing public attention and starting the legend of Bowie’s reputation as the South’s most formidable knife fighter. Soon, men were asking blacksmiths and cutlers to make them a “Bowie Knife.”

James Bowie – Dying at the Alamo