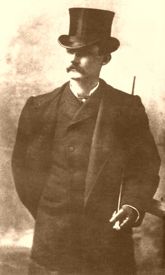 A gunfight in front of the Oriental Saloon in Tombstone, Arizona, this event took place between Luke Short and Charlie Storms, both of whom were professional gamblers and known gunfighters on February 25, 1881.

The Oriental Saloon, which opened the previous summer on the northeast corner of Allen and Fifth Streets, was described as “most elegant,” “simply gorgeous,” and the “finest” saloon in town. The bar, carpeting, furnishings, and live piano and violin music were impressive. Despite its upscale nature, the establishment would see its share of violence in the rough-and-tumble town of Tombstone.

Two compartments made up the Oriental; one was the “saloon,” and the other was the “gaming” section. Concerned about maintaining a quality environment and wishing to attract high rollers, the saloon gave Wyatt Earp a one-quarter interest in the gambling concession for his services as a manager and enforcer in January 1881. To assist him, Earp invited his friend Bat Masterson to come to Tombstone in February 1881. Masterson accepted, and he helped by running the faro tables.

Luke Short, cowboy, gunfighter, U.S. Army scout, dispatch rider, gambler, boxing promoter, and saloon owner, arrived in Tombstone in late November 1880, where he met up with the likes of Wyatt Earp and Bat Masterson, and he too soon held an interest in the gambling concession at the Oriental. 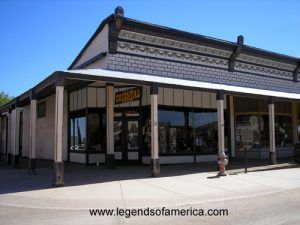 On the morning of Friday, February 25, 1881, Short was serving as the lookout, seated next to the dealer at a faro game in the Oriental. At the table was another known gunfighter and gambler — a man named Charlie Storms, who had recently arrived in Tombstone. Storms, who had been drinking all night and was unaware of Short’s shooting skills, began to make several rude comments to Short. Just as the two were about to pull out their six guns, in walked Bat Masterson. Friends with both gamblers, Masterson stopped the fight and talked Storms into returning to his room at the San Jose House.

For a short time, it seemed as if the confrontation had blown over, when suddenly, as Masterson and Short were talking on the boardwalk in front of the Oriental Saloon, Storms reappeared, took hold of Luke’s arm, and pulled him off the sidewalk. Then Storms went for his gun, but Short beat him to the draw and shot him through the heart, blowing him backward and setting his shirt afire. As Charlie was falling to the ground, Luke shot him again. As Storms lay on the ground dead, Luke Short turned to Masterson and said, “You sure as hell pick some of the damnedest people for friends, Bat!” One bystander reported that “the faro games went right on as though nothing had happened.” 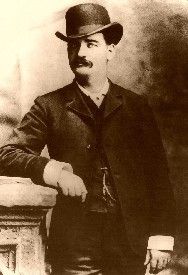 Bat Masterson, who was in Tombstone at the time, described what happened in a magazine article he wrote in 1907:

“Charlie Storms and I were very close friends, as much as Short and I were, and for that reason, I did not care to see him get into what I knew would be a very serious difficulty. Storms did not know Short and, like the bad man in Leadville, had sized him up as an insignificant-looking fellow whom he could slap in the face without expecting a return. Both were about to pull their pistols when I jumped between them and grabbed Storms, at the same time requesting Luke not to shoot, a request I knew he would respect if it was possible without endangering his own life too much. I had no trouble in getting Storms out of the house, as he knew me to be his friend. When Storms and I reached the street, I advised him to go to his room and take a sleep, for I then learned for the first time that he had been up all night and had been quarreling with other persons…

I was just explaining to Luke that Storms was a very decent sort of man when, lo and behold! There he stood before us without saying a word, at the same time pulling his pistol. Luke stuck the muzzle of his pistol against Storm’s heart and pulled the trigger. The bullet tore the heart asunder and, as he was falling, Luke shot him again. Storms was dead when he hit the ground.”

Tombstone city Marshal Ben Sippy arrested Short for killing Storms. During the preliminary hearing, Masterson testified that Short acted in self-defense, and Short was released. The Arizona Weekly reported that Storms was around 60 years old and survived by a widow in San Francisco.

Shortly afterward, Luke Short left Tombstone and headed toward Dodge City, Kansas, where he would buy an interest in the Long Branch Saloon.

In June 1881, the original Oriental Saloon burned to the ground in a devastating fire that destroyed much of Tombstone’s business district. But, the Oriental was quickly rebuilt and continues to stand today, listed in the National Register of Historic Places on October 15, 1966 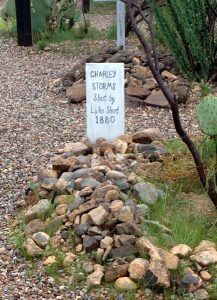