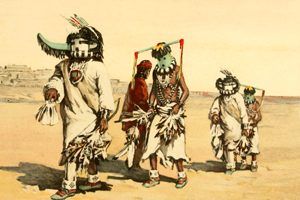 A spirit being in western Puebloan religious beliefs, Kachinas are a central theme within several cultures, including the Hopi and the Tewa Village on the Hopi Reservation in Arizona; and the Zuni, Acoma, and Laguna Pueblos in New Mexico. Also called katchina, katcina, or Katsina, these spirits, or personifications of things in the natural world, may represent anything from rain to crops to various animals, stars, beloved ancestors, and even other Indian tribes. The word kachina derives from the Hopi term kachi, which means “spirit father, life, or spirit.”

There are more than 400 different kachinas in Hopi and Pueblo culture, which vary from one pueblo community to another. Kachinas are expressed in three ways: the spiritual or supernatural deities, the masked dancers representing kachinas at religious ceremonies, and kachina dolls or carvings.

The origin of kachinas is not entirely known, but according to Hopi oral traditions, these mostly benevolent spiritual beings came from the underworld with the Hopi people. They emerged from the ground near the villages where the Hopi continue to live today. The kachinas taught the people how to make tools, hunt, heal sickness, and live off the land by collecting plants and herbs and planting crops. 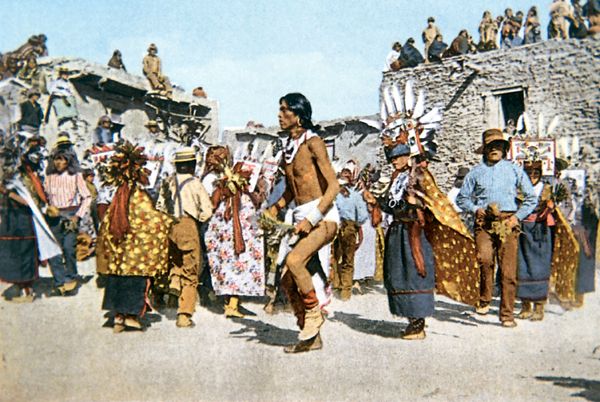 With their powerful dancing ceremonies, the kachinas brought rain for the corn, beans, and squash, helped the people build thriving communities, led them in offering gratitude to the spiritual forces, and provided many blessings of life. But, when enemies attacked the Hopi, the kachinas were killed, and their souls returned to the underworld. Afterward, the Hopi began to impersonate the kachinas, wearing their masks and costumes to bring rain, good crops, and continued well-being.

Another version of the mythology says that over time, the kachinas returned to the underworld when the Hopi people began to take them for granted. But, before they left, they taught a few faithful young men their ceremonies and showed them how to make the masks and costumes. When the other Hopi realized their loss, they remorsefully turned to the human impersonators, who have continued the ceremonies to this day. 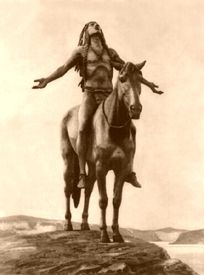 Appeal to the Great Spirit by the John Drescher Co, 1921.

For over 2,000 years, Native Americans of the Southwest have prayed to the great spirits to bless their world with good weather, abundant game, and a bountiful harvest. They also believe that during their lives, they are surrounded by several spirits. After the winter solstice, kachinas bring messages from these spirits and reside with the tribe for half of each year, interacting with the Pueblo people. They allow themselves to be seen by the community when the men perform traditional rituals while wearing kachina masks and other regalia. The kachina spirits are said to enter the bodies of the dancers in underground chambers called kivas. The men who participate in these ceremonies dress in regalia designed to identify a particular spiritual kachina. The mask worn by the participant is believed to contain the spiritual essence of the actual kachina. Men portray both the male and female spirits except for only one Kachina — the Pachavuin Mana.

When an individual is dressed as a specific kachina in a ceremonial dance, his actions during the ceremony transmit the supplications and prayers of the people to the kachina spirits. While the kachinas perform, spectators sprinkle them with corn pollen to exchange blessings between the kachinas and the people. During open ceremonies, the kachinas distribute kachina dolls, toy bows, rattles, fruits, and sweets to the children between dances. The Kachina Dolls, which are believed to contain kachina spirits, are given to children in hopes of future abundance, health, and tools for education.

The ceremonies that the Pueblo Indians conduct to honor these spirits vary from tribe to tribe and village to village, but those that include the masked men dressed as kachinas generally occur during the time of needed agricultural fertility and harvest. These ceremonies, consisting of prayers and thanks for rain and good crops, are social occasions for the village, where friends and relatives come from neighboring villages to see the “dance” and partake in the feasts. These ceremonies are thought to retain the balance and close harmony between the Pueblo people and their spiritual kachinas. 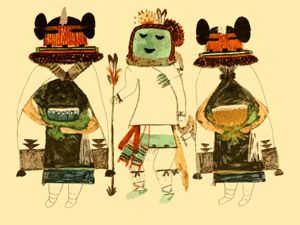 Ahulani, flanked by two Soyal Manas, participates in the the Soyal Ceremony on the last day of the ceremony.

Each dance tells a story and serves a different purpose, and the costumes worn by the dancers are more than just decorative — the feathers, jewelry, and beads all communicate part of the story. Every story is considered a prayer, not a performance. Some, but not all, dances are open to the public and vary from tribe to tribe.

The third type of Kachina is the dolls and carvings that the pueblo men carefully craft. The Hopi were the first to create kachina dolls to teach children about these spiritual beings and their wisdom to share with the people. The dolls are traditionally carved from a single cottonwood root, then painted and adorned to represent objects from the tribe’s spiritual beliefs.

The messages of the dolls and the men acting in the ceremonies vary widely from teaching the identities of the kachinas and the symbolism of their regalia to proper behavior and learning about responsibilities. Each kachina has a different purpose – Ogres teach discipline, Chief Kachinas teach wisdom and have powers comparable to that of a religious elder, the female kachinas teach values, clown kachinas amuse, and others provide advice, blessings, and warnings.

The dolls are given to Hopi girls, beginning in infancy and distributed during ceremonies, while the boys receive bows and arrows. Because only men are allowed to personify the kachinas, the dolls also serve to educate and remind the rest of the tribe of their messages and allow everyone to experience a connection with the spirits. 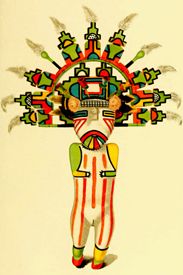 The dolls are not used as toys but are hung from walls or otherwise displayed in the home. These treasured pieces are passed down from generation to generation, often staying within the same family for decades or even hundreds of years.

Although not worshipped, each Kachina is viewed as a powerful being who will use its special power for human good if given admiration and respect.

It is unknown where the Kachina Cult originated; however, some evidence points to a Mesoamerican origin, meaning indigenous cultures that developed in parts of Mexico and Central America before Spanish exploration and conquest in the 16th century. Some research suggests that the culture might have been brought with the clans, which migrated to the south and then returned northward, bringing with them the kachina beliefs. The similarity of many aspects of Hopi religion to that of the Aztec to the south strongly suggests this possible origin.

A few archaeological hints indicate that there was a viable Kachina Cult by the time the Hopi settled in present-day Arizona in 1100. Early evidence of kachina art has been found in the Puerco Ruins in the Petrified Forest National Park that dates back to about 1150 A.D. The first Kachina masks and dancers appeared in rock art around 1325 A.D. By the 15th century, the culture of the masked dancers and carved dolls is known to have become a part of the culture of various Puebloan tribes. In the 16th century, the Spanish began to document, having seen bizarre images of the devil hanging in Pueblo homes. These were most likely kachina dolls. 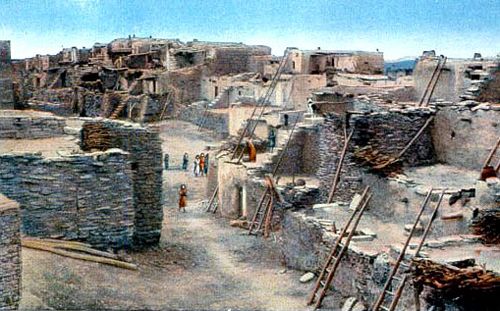 The first kachina doll was collected from the Hopi in 1857 by Dr. Palmer, a U.S. Army surgeon. Afterward, travelers picked up more dolls, and the first photographs were taken in the 19th century. These early dolls were simple in style, with slightly detailed masks and simplified bodies. Over time, the old drawings were revised from stick-like figures to clean, simplified designs emphasizing facial features and the use of colors in pictographs and kiva murals. The dolls also became more sophisticated and were adorned with fur, bird feathers, turquoise, and other natural elements to make them look more realistic.

It was not until the late 1800s and early 1900s that kachina dolls began to be sold in the marketplace. Today, Kachina doll-making involves both tradition and artistry and is perceived as one of the most collectible Native American crafts on the market. As more non-Indian collectors became enamored with Kachina dolls, and as power tools like Dremel rotary tools became available, kachina doll carvers also became more creative. The formerly flat doll carvings are full-figured, with lifelike movements, brighter colors, and elaborate regalia. However, some carvers have recently returned to carvings of the more traditional dolls.

Hopi – Peaceful Ones of the Southwest

Types of Kachinas and Ceremonies