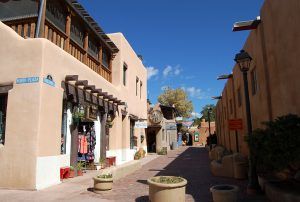 Nestled deep within the Sangre de Cristo mountain range is Taos, New Mexico. Home of the Tiwa Indians and the old Taos Pueblo, it is one of the longest continually inhabited communities in the United States. A highly cultural, artistic, and spiritual city, it has a number of mystical qualities, one of which is known as the “Taos Hum.”

In recent decades, studies have explored this low-frequency humming sound and a variety of explanations have been offered ranging from secret experiments in Los Alamos, New Mexico, top-secret military flight activity, electromagnetic vibrations emitted by Taos Mountain, or even low-flying alien spacecraft over the night skies. Not everyone can hear the “mountain song,” in fact, only about two percent of the population can pick up this strange audio phenomenon.

But, hear it they do, today, and far back into history. Ancient lore of the area tells of “Nature holding counsel” with her own, and as she “sings” she resets her patterns of harmony.

Looming out of the Taos mountain range is a peak known as El Salto. It was this peak, which was reflecting the scarlet colors of the setting sun, that caused the first settlers in the valley to name the entire range Sangre de Cristo – “The Blood of Christ.” This majestic peak has seven waterfalls that cascade down its side in summer and form giant ice sculptures in the winter. For generations, the people of the area have considered El Salto to be a holy mountain that baptizes the valley with its singing waters. Behind many of the waterfalls are caves of different shapes along the various elevations of El Salto peak. These caves will catch the sounds of the cascading waterfalls and echo them across the valley. 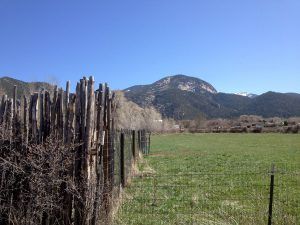 In the mid-1800s, the famous healer, holy man, and hermit, Giovanni Maria Agostini Justiniani, passed through the area and climbed all the way to the top of El Salto. He would write in his journal, that he had heard the “singing waters” of the sacred mountain. He described that he had distinctly heard seven notes of the musical scale as nature played her tune on the holy mountain. Mountain climbers today continue to describe hearing a long, endless musical tone, which changes as they climb upward.

Is this the source of the famous Taos Hum? Many people who can hear it describe feeling blessed and comforted by the low-frequency noise. But, others do not have such a pleasant experience. Some tell of hearing a low rumbling or buzzing sound, while others describe it as sounding like a distant diesel engine. In many of these cases, people who have heard it also say that the sound is maddening, drives them crazy, and interferes with their sleep. More severe complaints also included pressure on the ears, headaches, and nosebleeds. Of those who complain of the constant humming noise, they also say that it does not sound like a natural phenomenon, often starts abruptly, and heard more after sunset and in the middle of the night than during the day.

In 1993, several of these folks banded together and petitioned Congress to investigate the noise. Four years later, the politicians responded by sending a team of a dozen investigators and scientists from some of the most prestigious research institutes in the nation to look into the strange low-frequency noise. Some of the facilities involved in the investigation included the University of New Mexico, Sandia National Laboratories, Phillips Air Force Laboratory, and the Los Alamos National Laboratory.

Despite all of the knowledge and technology of the scientific experts, they were unable to find the source of the noise. The “hum” is not detectable by microphones or VLF antennae, leading many to believe that it is not a man-made sound; but, rather, just one more of Mother Nature’s mysteries. One theory given was that it might be caused by shifting wind patterns coming out of the Río Grande Canyon. Yet others blame the noise on more modern causes such as electromagnetic background buildup or military communication systems.

Taos is not alone with its “hum.” Other places around the world have also reported the same phenomenon in Bristol, England; Bondi, New South Wales, Australia; and on the Big Island of Hawaii. New Zealand has the Auckland Hum and in Indiana, people hear what is known as the Kokomo Hum.

For those who want to hear the hum, it is suggested to get out of the city of Taos into the surrounding deserts or forests. Early morning or at night are the best times to hear the hum. Some who have heard the hum say that it can be heard best near Tres Orejas, west of Taos. 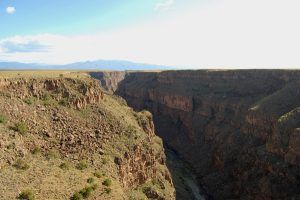 Could wind patterns from the Rio Grand River Canyon be causing the Taos Hum?

For those looking for the beauty and adventure of the El Salto waterfalls, they are located about seven miles north of Taos, on private land. They can be visited with a permit.