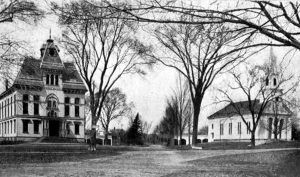 Topsfield – Located in Essex County, the area had long been inhabited by the Agawam Indian tribe prior to English colonization in the early seventeenth century. Led by Chief Masconomet, the Agawam people claimed the land north of the Danvers River, the whole of Cape Ann, and from there, to the Merrimack River. However, the first European explorers had brought smallpox to New England, which would eventually decimate all the shore tribes. When the colonists first arrived they investigated the area of Agawam and met the people, but, they settled in Charlestown. However, in 1633, John the Younger took a group of men northward and he and several of them took up residence in Ipswich Harbor. Two others continued up the river to a large meadow, which they called New Meadows. It was this place that would later become Topsfield. By 1643, the area of New Meadows was permanently settled.

One of the first settlers was Robert Smith who arrived in 1638. His descendants extended through five generations in Topsfield. They were respected townspeople and members of Capen’s Congregational Church. Joseph Smith, Sr. was born in Topsfield in 1771, and his son, Joseph Smith, Jr., who was born in Vermont after his family moved, would later found the Church of Jesus Christ of Latter-Day Saints. Virtually all of the early settlers were self-supporting farmers with some involved in blacksmithing and saw and gristmill operations. The General Court of Massachusetts renamed the place Topsfield in 1648, after Toppesfield, England. In 1650, the town was incorporated. In 1684, the village hired the Reverend Joseph Capen, whose Parson Capen House still stands as the town’s most notable historical landmark.

Like other area villages, the Salem witch trials of 1692 touched Topsfield directly. The first of Topsfield’s six accused witches were young Abigail Hobbs, who had a reputation for “rude” and blasphemous behavior. She was arrested on April 18, 1692, and her parents, William and Deliverance were arrested three days later. Despite the circle of accusations in the family, all three Hobbs managed to avoid hanging. In July 1692, Rebecca Nurse of Salem Village was hanged at Gallows Hill in Salem. She was the daughter of William Towne of Topsfield. The same girls who had accused Rebecca Towne Nurse of witchcraft also named her sisters Sarah Towne Cloyce and Mary Towne Easty who lived in Topsfield. Though Sarah was eventually set free, Mary was hanged in September and Elizabeth Jackson Howe from Topsfield were hanged along with Rebecca Nurse. Many other Topsfield residents were accused of witchcraft until the hysteria ended in May 1693, when the governor of Massachusetts set free all of the remaining persons accused of witchcraft and issued a proclamation of a general pardon.

Afterward, Topsfield would move on and during the American Revolution, many men of Topsfield were involved. By the 1800’s shoe factories, stores and inns appeared in the community and by the beginning of the 20th century, the town’s character had changed from a farming and shoe manufacturing community to a town of many large estates. Today, Topsfield is a small community of just about 6,000 people that enjoy a more rural atmosphere. 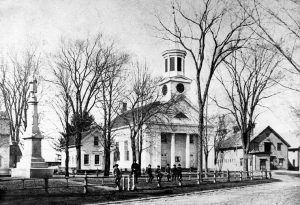 Wenham – Located in Essex County, Wenham, was originally home to Native American Algonquian peoples for hundreds of years. Unfortunately, they were reduced in great numbers due to smallpox in the early 17th century. It was first settled in 1635 and was part of Salem. In September 1643, the General Court of Massachusetts granted that Wenham should be a town in its own right and the town was incorporated. The name is probably derived from two villages in England — Great Wenham and Little Wenham. A church was formed in October 1644 with John Fiske as pastor and seven families as members.

Wenham was fortunate during the witch hysteria of 1692, as there were no Wenham residents who were convicted of witchcraft. However, there were several people of Topsfield who were involved. Four were jurors in the trials including William Fisk, the foreman, and his son Thomas Fisk. One of the first three persons accused of witchcraft in the area was Sarah Solart Good, who had grown up in Wenham. However, when she married William Good, they moved to Salem Village. She was hanged on July 19, 1692. Another woman named Sarah Bibber, began as an accuser, giving depositions against 16 people, many of whom were later hanged. In the hysteria, the tables were later turned on her and Bibber, herself, was accused of being involved in witchcraft. However, it doesn’t appear that Sarah Bibber was ever indicted or tried.

Today, Wenham continues to retain much of its historic character and rural scenery. It is called home to almost 5,000 people.