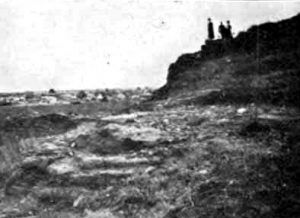 That portion of the great central plains which radiates from Pawnee Rock, including the Big Bend of the Fort Larned, thirteen miles distant, where that river makes a sudden sweep to the southeast, and the beautiful valley of the Walnut, in all its vast area of more than a million square acres, was from time immemorial a sort of debatable land, occupied by none of the Indian tribes, but claimed by all to hunt in; for it was a famous pasturage of the buffalo.

None of the various bands had the temerity to attempt its permanent occupancy; for whenever hostile tribes met there, which was of frequent occurrence, in their annual hunt for their winter’s supply of meat, a bloody battle was certain to ensue.

The region referred to has been the scene of more sanguinary conflicts between the different Indians of the plains, perhaps, than any other portion of the continent. Particularly was it the arena of war to the death, when the Pawnee met their hereditary enemies, the Cheyenne.

Pawnee Rock was a spot well calculated by nature to form, as it has done, an important rendezvous and ambuscade for the prowling savages of the prairies, and often afforded them, especially the once powerful and murderous Pawnee whose name it perpetuates, a pleasant little retreat or eyrie from which to watch the passing Santa Fe traders, and dash down upon them like hawks, to carry off their plunder and their scalps.

Through this once dangerous region, close to the silent Arkansas River, and running under the very shadow of the Rock, the Old Trail wound its course. Now, at this point, it is the actual road-bed of the Atchison, Topeka, and Santa Fe Railroad, so strangely are the past and present transcontinental highways connected here.

Who, among bearded and grizzled old fellows like myself, have forgotten that most sensational of all the miserably executed illustrations in the geographies of fifty years ago, “The Santa Fe Traders attacked by Indians”? The picture located the scene of the fight at Pawnee Rock, which formed a sort of nondescript shadow in the background of a crudely drawn representation of the dangers of the Trail.

If this once giant sentinel of the plains might speak, what a story it could tell of the events that have happened on the beautiful prairie stretching out for miles at its feet!

In the early fall, when the Rock was wrapped in the soft amber haze which is a distinguishing characteristic of the incomparable Indian summer on the plains; or in the spring, when the mirage weaves its mysterious shapes, it loomed up in the landscape as if it were a huge mountain, and to the inexperienced eye appeared as if it was the abrupt ending of a well-defined range. But when the frost came, and the mists were dispelled; when the thin fringe of timber on the Walnut, a few miles distant, had doffed its emerald mantle, and the grass had grown yellow and rusty, then in the golden sunlight of winter, the Rock sank down to its normal proportions, and cut the clear blue of the sky with sharply marked lines.

In the days when the Santa Fe trade was at its height, the Pawnee were the most formidable tribe on the eastern central plains, and the freighters and trappers rarely escaped a skirmish with them either at the crossing of the Walnut, Pawnee Rock the Fork of the Pawnee, or at Little and Big Coon Creeks.

Today what is left of the historic hill looks down only upon peaceful homes and fruitful fields, whereas for hundreds of years it witnessed nothing but battle and death, and almost every yard of brown sod at its base covered a skeleton. In place of the horrid yell of the infuriated savage, as he wrenched off the reeking scalp of his victim, the whistle of the locomotive and the pleasant whirr of the reaping-machine is heard; where the death-cry of the painted warrior rang mournfully over the silent prairie, the waving grain is singing in beautiful rhythm as it bows to the summer breeze.

Pawnee Rock received its name in a baptism of blood, but there are many versions as to the time and sponsors. It was there that Kit Carson killed his first Indian, and from that fight, as he told me himself, the broken mass of red sandstone was given its distinctive title.

It was late in the spring of 1826; Kit was then a mere boy, only seventeen years old, and as green as any boy of his age who had never been forty miles from the place where he was born. Colonel Ceran St. Vrain, then a prominent agent of one of the great fur companies, was fitting out an expedition destined for the far-off Rocky Mountains, the members of which, all trappers, were to obtain the skins of the buffalo, beaver, otter, mink, and other valuable fur-bearing animals that then roamed in immense numbers on the vast plains or in the hills, and were also to trade with the various tribes of Indians on the borders of Mexico.

Carson joined this expedition, which was composed of twenty-six mule wagons, some loose stock, and forty-two men. The boy was hired to help drive the extra animals, hunt game, stand guard, and to make himself generally useful, which, of course, included fighting Indians if any were met with on the long route.

The expedition left Fort Osage one bright morning in May in excellent spirits, and in a few hours turned abruptly to the west on the broad Trail to the mountains. The great plains in those early days were solitary and desolate beyond the power of description; the Arkansas River sluggishly followed the tortuous windings of its treeless banks with a placidness that was awful in its very silence; and whoso traced the wanderings of that stream with no companion but his own thoughts, realized in all its intensity the depth of solitude from which Robinson Crusoe suffered on his lonely island. Illimitable as the ocean, the weary waste stretched away until lost in the purple of the horizon, and the mirage created weird pictures in the landscape, distorted distances, and objects which continually annoyed and deceived. Despite its loneliness, however, there was then, and ever has been for many men, an infatuation for those majestic prairies that once experienced is never lost, and it came to the boyish heart of Kit, who left them but with life, and full of years.

There was not much variation in the eternal sameness of things during the first two weeks, as the little train moved day after day through the wilderness of grass, its ever-rattling wheels only intensifying the surrounding monotony. Occasionally, however, a herd of buffalo was discovered in the distance, their brown, shaggy sides contrasting with the never-ending sea of verdure around them. Then young Kit and two or three others of the party who were detailed to supply the teamsters and trappers with meat would ride out after them on the best of the extra horses which were always kept saddled and tied together behind the last wagon for services of this kind. Kit, who was already an excellent horseman and a splendid shot with the rifle, would soon overtake them, and topple one after another of their huge fat carcasses over on the prairie until half a dozen or more were lying dead. The tender humps, tongues, and other choice portions were then cut out and put in a wagon which had by that time reached them from the train, and the expedition rolled on.