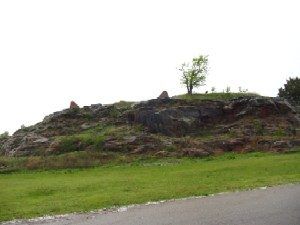 Jutting out above the prairie near Larned, Kansas is a landmark called Pawnee Rock where dozens of gold and silver caches are said to have been buried. For centuries, Pawnee Rock was a site where the Comanche, Kiowa, Arapaho and Cheyenne Indians held councils of war and peace.

Many Indian battles were fought here and arrowheads can often be found bearing witness to these bloody conflicts. The sandstone citadel was also used by the Indians as a vantage point to spot buffalo herds, and later — approaching wagon trains.

Rising up out of the plains, Pawnee Rock was a landmark for explorers and a popular campsite for travelers crossing the prairie. The large rock formation later became a popular stop upon the Santa Fe Trail for the white settlers heading west in search of adventure and fortune. The Rock was considered the mid-point of the long road between Independence, Missouri and Santa Fe, New Mexico lying between long stretches of dry plains.  Water, provided by the nearby Arkansas River, and fresh meat, obtained by plentiful game, was vital to the survival of the wagon trains.

Explorers Zebulon Pike, Webb, Gregg, Doniphan and other travelers mentioned Pawnee Rock in their journals. In 1826, when Kit Carson was just 17 years old, the wagon train he was working for camped near the Rock. Drawing guard duty that night, he shot his own mule, thinking it was an attacking Indian.

As the hundreds of thousands of trappers, soldiers, gold seekers and emigrants passed by, they carved their names into every conceivable place upon the sandstone face of the bluff. In 1848, James Birch, a soldier on his way to the Mexican War, wrote: “Pawnee Rock was covered with names carved by the men who had passed it. It was so full that I could find no place for mine.”

Although the rock was one of the most famous landmarks along the 750-mile trail, it also became known as one of the most dangerous points, as the angry Pawnee Indians began ambushing the caravans. Word of the attacks spread from one end of the trail to the other, but the wagon trains still stopped at the vital campsite needing fresh provisions for the rest of their journey.

It quickly became a common practice for the travelers to bury their valuables before bedding down for the night. Hidden, the money would be safe if they were attacked by Indians or robbers.  The massacres continued, and many of the travelers were slain before they were able to dig up their caches. Today, the number of unfound buried treasures is estimated at well over a hundred, ranging from small caches of the lone traveler, to very large belonging to Spanish expeditions, or rich Santa Fe freighters returning east carrying gold or silver from the sale of their goods.

When the railroads began making their way across the plains in 1872, the town of Pawnee Rock was founded, which lies at the foot of the sandstone cliff. These settlers quarried the bluff for building materials reducing its elevation by at least one-half its original height.

In 1908, the remaining portion was acquired by the Woman’s Kansas Day Club and the next year it was turned over to the State of Kansas as an historic site.  On May 24, 1912, a stone monument was dedicated with great celebration before a crowd of some eight thousand onlookers.

The state park today provides a road leads to a shelter house and monument on the summit. An overlook, monument and historical signs now grace its reduced summit, where visitors can stand, witnessing the view that so many throughout history have shared. The site is open from sunrise to sunset.

Starting out from any direction, a treasure hunter might look within two miles of the Rock for the hidden treasures. The area is also rich in relics from Indians, early Spanish explorers, and Santa Fe Trail pioneers.

That being said, please note that treasure hunting, metal detecting, digging or removal of objects is not permitted at Kansas State Historic Sites.