Established in 1872, upon the establishment of the Atchison, Topeka & Santa Fe Railroad, Dodge City was in the very heart of the buffalo country. Hardly had the railroad reached there, long before a depot could be built (they had an office in a box car), business began; and such a business! Dozens of cars a day were loaded with hides and meat, and dozens of carloads of grain, flour, and provisions arrived each day. The streets of Dodge were lined with wagons, bringing in hides and meat and getting supplies from early morning to late at night.

Charles Rath & Company ordered from Long Brothers, of Kansas City, two hundred cases of baking-powder at one order. They went to Colonel W. F. Askew, to whom we were shipping immense quantities of hides, and said: “These men must be crazy, or else they mean two hundred boxes instead of cases.”

They said there were not two hundred cases in the city. Askew wired us if we had not made a mistake. We answered, “No; double the order.” Askew was out a short time after that and saw six or eight carloads of flour stacked up in the warehouse. He said he now understood. It was to bake this flour up into bread.

I have been to several mining camps where rich strikes had been made, but I never saw any town to equal Dodge. A good hunter would make a hundred dollars a day. Everyone had money to throw at the birds. There was no article less than a quarter –a drink was a quarter, a shave was a quarter, a paper of pins a quarter, and needles the same. In fact, that was the smallest change. Governor St. John was in Dodge once, when he was notified that a terrible cyclone had visited a little town close to the Kansas line, in Nebraska. In two hours I raised one thousand dollars, which he wired them.

Our first calaboose in Dodge City was a well fifteen feet deep, into which the drunkards were let down and allowed to remain until they were sober. Sometimes there were several in it at once. It served the purpose well for a time. Of course everyone has heard of wicked Dodge; but a great deal has been said and written about it that is not true. Its good side has never been told, and I cannot give it space here. Many reckless, bad men came to Dodge and many brave men. These had to be met by officers equally brave and reckless. As the old saying goes, “You must fight the devil with fire.” The officers gave them the south side of the railroad-track, but the north side must be kept respectable, and it was. There never was any such thing as shooting at plug hats. On the contrary, every stranger that came to Dodge City and behaved himself was treated with politeness; but woe be unto the man who came seeking a fight. He was soon accommodated in any way, shape, or form that he wished.

Often have I seen chivalry extended to ladies on the streets, from these rough men that would have done credit to the knights of old. When some man, a little drunk, and perhaps unintentionally, would jostle a lady in a crowd, he was soon brought to his senses by being knocked down by one of his companions, who remarked, “Never let me see you insult a lady again.”   In fact, the chivalry of Dodge toward the fair sex and strangers was proverbial. Never in the history of Dodge was a stranger mistreated; but, on the contrary, the utmost courtesy was always and under all circumstances extended to him, and never was there a frontier town whose liberality exceeded that of Dodge. But, while women, children, and strangers were never, anywhere, treated with more courtesy and respect; while such things as shooting up plug hats and making strangers dance is all bosh and moonshine, and one attempting such would have been promptly called down; let me tell you one thing –none of Dodge’s well-known residents would have been so rash as to dare to wear a plug hat through the streets, or put on any “dog,” such as wearing a swallow tailor evening dress, or any such thing.   The general reputation of young Dodge City is well described in an article entitled, “Reminiscences of Dodge,” written in 1877, and expressing what a stranger has to say about the town. The article runs as follows: 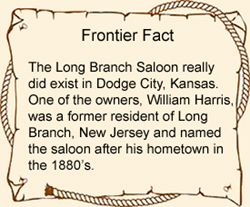 “By virtue of the falling off in the cattle drive to Kansas for this year, and the large number of cattle driven under contract, Dodge City became the principal depot for the sale of surplus stock; buyers met drovers at this point, purchased and received purchases without unnecessary delay, thereby greatly facilitating business and enabling quick returns of both owners and hands. In the future, situated as it is upon one of the best railroads traversing the country from east to west, the Atchison, Topeka & Santa Fe, it will probably occupy an enviable position as a cattle market. “Dodge has many characteristics which prevent its being classed as a town of strictly moral ideas and principles, notwithstanding it is supplied with a church, courthouse, and jail. Other institutions counterbalance the good works supposed to emanate from the first mentioned. Like all frontier towns of this modern day, fast men and fast women are around by the score, seeking whom they may devour, hunting for a soft snap, taking him in for cash, and many is the Texas cowboy who can testify as to their ability to follow up successfully the calling they have embraced in quest of money.

“Gambling ranges from a game of five-cent chuck-aluck to a thousand-dollar poker pot. Nothing is secret, but with open doors upon the main streets, the ball rolls on uninterruptedly. More than occasionally some dark-eyed virago or some brazen-faced blonde, with a modern sundown, will saunter in among the roughs of the gambling houses and saloons, entering with inexplicable zest into the disgusting sport, breathing the immoral atmosphere with a gusto which I defy modern writers to explain. Dance houses are ranged along the convenient distances and supplied with all the trappings and paraphernalia which go to complete institutions of that character. Here you see the greatest abandon. Men of every grade assemble to join in the dance. Nice men with white neckties, the cattle dealer with his good clothes, the sport with his well-turned fingers, smooth tongue, and artistically twisted mustache, and last but not least the cowboy, booted and spurred as he comes from the trail, his hard earnings in his pocket, all join in the wild revel; and yet with all this mixture of strange human nature a remarkable degree of order is preserved. Arms are not allowed to be worn, and any noisy whisky demonstrations are promptly checked by incarceration in the lock-up. Even the mayor of the city indulges in the giddy dance with the girls, and with his cigar in one corner of his mouth and his hat tilted to one side, he makes a charming looking officer.

“Some things occur in Dodge that the world never knows of. Probably it is best so. Other things occur that leak out by degrees, notwithstanding the use of hush money. That, too, is perhaps the best. Men learn by such means.

“Most places are satisfied with one abode of the dead. In the grave there is no distinction. The rich are known from the poor only by their tombstones, so the sods that are upon the grave fail to reflect the characters buried beneath them. And yet Dodge boasts of two burying spots, one for the tainted whose very souls were steeped in immorality, and who have generally died with their boots on. ‘Boot Hill‘ is the somewhat singular title applied to the burial place of the class just mentioned. The other is not designated by any particular title but it is supposed to contain the bodies of those who died with a clean sheet on their beds-the soul in this case is a secondary consideration.”

1 thought on “The Beginnings of Dodge City”