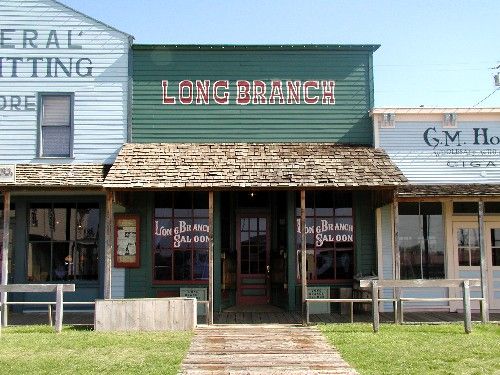 The Long Branch Saloon, one of the most historic saloons of the Old West, stills serves up a brewsky or two and a sarsaparilla at the Boot Hill Museum in Dodge City, Kansas.

Back in the 1870’s Dodge City began to acquire its infamous stamp of lawlessness and gun slinging. Without local or military law enforcement, buffalo hunters, railroad workers, drifters, cowboys, and soldiers scrapped and fought, leading to the shootings where men died with their boots on.

It was during this time that the famous Long Branch Saloon was built, and even that was an Old West tale, in and of itself. It all began when a bunch of men were playing ball on the hot dry Kansas plains. Side wagers began as the cowboys played against the soldiers. Of course, they were tipping a few brewskies during the game and a bigger wager was soon made that if the soldiers lost, they would provide the building materials to construct a saloon.

All agreed that tipping a few beers outside of the sun would be a nice relief. Luckily for all, the soldiers lost the game and the building materials promptly showed up. Before long, the Long Branch Saloon was born. 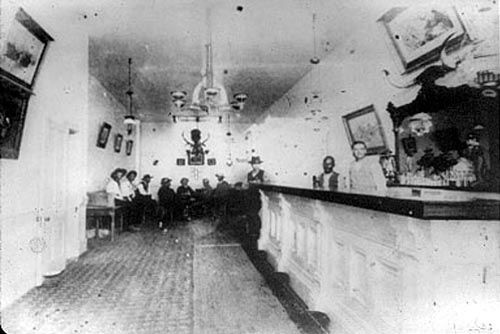 The saloon was purchased by Chalkley Beeson and William Harris in 1878 and through their efforts, it soon became the most popular and refined place for the cattlemen of Dodge City. Chalkey Beeson’s five-piece orchestra played nightly for the entertainment of the cattlemen. Beeson also organized and led the famous Cowboy Band which entertained all over the west at cattlemen’s conventions, concerts, dances and in Washington, D.C. at the inauguration of President Harrison.

Gambling ranged from a game of five-cent “Chuck-a-luck” to thousand dollar poker pots. The Long Branch Saloon served milk, tea, lemonade, sarsaparilla, all types of alcohol including champagne, and of course beer. Anheuser-Busch was the original beer served in the Long Branch. Everything was kept cold in the winter from ice that came from the river, and in the summer it was shipped out on the train from the mountains in Colorado.

The Long Branch Saloon was one of 16 rowdy saloons during Dodge City’s Wild West Days. Soon, however, lawmen, such as Bat Masterson, Wyatt Earp, Bill Tilghman, Charlie Basset, and others helped to tame the town.

In 1885, the original Front Street buildings were destroyed by fire and as the cattle drives were ending with the coming of the railroad, they were never rebuilt.

Today you can see a reconstruction of Front Street that began in 1947. Located on a section of the original 1870s cemetery, the buildings represent Dodge City as it appeared in 1876. Carefully researched through historic photographs and newspapers, you feel as if you’re stepping into the past when you enter the grounds of the Boot Hill Museum. 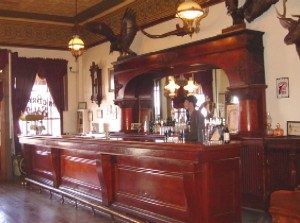 Various exhibits and hundreds of original artifacts can be seen throughout the museum which depicts early life in Dodge City. There is a collection of over 200 original guns on display, a working print shop, an extensive collection of drug store items, a Victorian-era cattleman’s home, a one-room schoolhouse, a railroad depot, dry goods store, saddlery, and many other special exhibits. Each of the more than 20,000 artifacts displayed throughout the complex are authentic.

At the reconstructed Long Branch Saloon, the exterior was copied from historic photographs. However, the interior of the building does not duplicate the original but is consistent with the interior of the saloons of that time. The authentic two-piece bar was built in 1881 by Brunswick Corporation and is hand-carved from Cherry wood. There are two Golden Eagles that sit atop the back bar, which was once a part of Chakley Beeson’s collection.  Today, it is illegal for anyone to own stuffed eagles except for Indians and Museums that acquired them before the 1940s. The stage in the Long Branch is filled nightly, during the summer, with The Long Branch Variety Show performers. There are singers and dancers and the stars of the show, Chalkley Beeson and Miss Kitty.

Today you can still “belly up to the bar” and order an ice-cold Budweiser or sarsaparilla bottled for the museum with their own label.

“Kansas has but one Dodge City, with a broad expanse of territory sufficiently vast for an empire; we have only room for one Dodge City; Dodge, a synonym for all that is wild, reckless, and violent; Hell on the Plains.”