Rising above the plains in Gove County in western Kansas is Monument Rocks, a series of large chalk formations formed some 80 million years ago. Also referred to as the Chalk Pyramids, the site was the first National Natural Landmark designated by the U.S. Department of Interior in 1968.

These magnificent large monoliths, rising as high as 70 feet, were created during the Cretaceous Period of geologic history when the area was covered by the Niobrara seaway, which extended from the present-day Gulf of Mexico north through Canada.

When the sea evaporated, it left behind fossilized sea organisms that became chalk deposits that over the eons have been eroded by the once much larger Smoky Hill River, wind, and rain.

Monument Rocks, nearby Castle Rock, and numerous sandstone bluffs in the area are today collectively known as the “Badlands of Kansas.” The region is also known as the source of some of the best Cretaceous marine fossils found anywhere in the world. Beneath these bluffs and outcroppings lie thousands of feet of marine sediments that have provided paleontologists with a wealth of fossils and the remains of extinct animals. 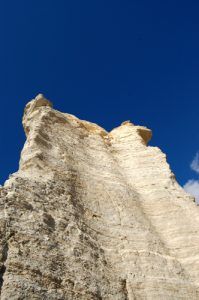 Several fossils, including fish bones, turtles, oyster shells, swimming reptiles, birds, coral, dinosaurs, and sharks’ teeth, can be seen at the nearby Keystone Gallery, the Fick Fossil and History Museum in Oakley, and at the Sternberg Museum in Hays, Kansas. According to locals, after heavy rain, the area still smells like an ocean bay.

Today, it is hard to imagine that this flat, arid cactus and buffalo grass prairie was completely covered by water, yet these awe-inspiring rock outcroppings tell a different story. The arches and buttes of Monument Rocks are spread out over ten acres, and its history stretches beyond the prehistoric period into the more recent past, when the Cheyenne, Arapaho, Kiowa, Sioux, and Apache Indians utilized this area as hunting grounds when the buffalo and other game were plentiful here. The rising monoliths were also a spiritual site for the Native Americans.

The site was first noted by explorers when John C. Fremont made his famous expeditions in the 1840s. Later, when the Smoky Hill Trail was blazed through the area to the Colorado goldfields in the 1860s, pioneers were also, no doubt, amazed by the towering formations sitting quietly on the mostly unbroken plains. The Butterfield Overland Despatch also came through here beginning in 1865. Because of the all too often Indian attacks, Fort Monument was established the same year to protect the emigrants along the trail. Situated about a mile southwest of Monument Rocks, there are no remains of the old fort today.

One of the most significant and most photographed sites at the landmark is the Keyhole Arch, which local lore says was started when someone was shooting at the rocks many years ago. When a bullet penetrated through a thin spot, the hole began, and locals have watched it expand through the years. As it continues to widen, at some point, the top of the arch will collapse, leaving fragile spires behind. 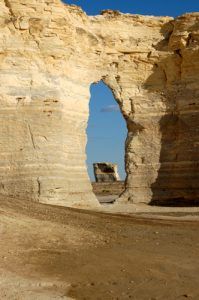 Though the site is a National Natural Landmark, Monument Rocks and nearby Castle Rock are both situated on private property. It is only through the generosity of these private landowners that visitors are allowed to enjoy the site. As such, please treat the site with respect by not climbing on the unstable rocks, digging out fossils, starting fires or grills for cooking, or venturing off established roads. There are no public restroom facilities nor camping allowed at the site. There is no fee to visit the sites.

Castle Rock can be reached by taking the Quinter Exit #107 off I-70, traveling 15 miles south on Castle Rock Road to the intersection of GO-80 and GO-K, then 4 miles east to Castle Rock sign, and north across a cattle guard (dry weather road only). 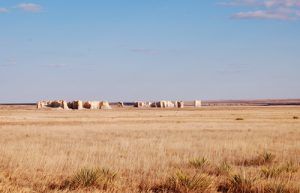