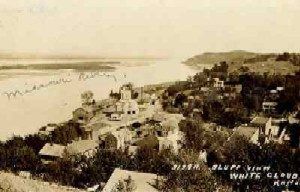 This beautiful little city was once a thriving metropolis of over 2,000 residents. It’s not quite yet a ghost town, but it’s long past its heyday, with less than 200 people calling it home.

Located on the bluffs of the Missouri River, White Cloud was one of the earliest and grandest towns in a new and fledgling Kansas Territory. The port town was a popular stop for the big steamboats carrying supplies bound for the west. Often the docks were crowded with wagons in the port community, which boasted a population of over 2,000 in its heyday. The town continued to thrive until after the Civil War when in 1860, the first “iron horse” touched Kansas soil, and supplies began to travel via the rails.

In 1804, the area where White Cloud would be established served as a vantage point and resting place for Lewis and Clark. According to legend, their names are carved on a stone close to White Cloud. 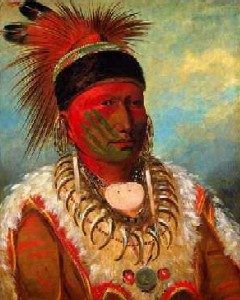 Long before the white men came to the area, the land belonged to the Ioway tribe. The tribe’s chief, Ma-Hush-Kah, or White Cloud, lived near the Missouri River at Iowa Point in a double-hewed log house. In 1854, Ma-Hush-Kah lost his life in a battle with the Pawnee Indians, who were mortal foes of the Ioway. The Indian Chief was buried near a large tree overlooking the Missouri River, below Iowa Point. After his death, Nan-cha-nin-ga, or No Heart, succeeded as head chief of the tribe.

In 1856, just two years after the Kansas-Nebraska Act opened the territories to white settlement, two enterprising men named Enoch Spaulding and John H. Utt laid out plans for White Cloud. A log cabin was the first structure erected, and frame buildings soon followed, including a drug store and a few frame houses, one of which was used as a hotel. The town was named for Ma-Hush-Kah, the noted chief of the Ioway.

In early 1857, the White Cloud Town Company was formed with $45,000 in capital, with officers James Foster, Dr. H.W. Peter, and W.J. Gatling, who invented the Gatling gun. Members of the Town Company included Utt, Spaulding, and Cornelius Dorland, who would later become White Cloud’s first mayor.

Initially, they faced problems with property rights until a famous land sale was held on July 4, 1857.  Two thousand people arrived for the big sale on four steamboats, and the bidding was spirited, with the final sale of lots amounting to $23,794. Celebrating in grand style, a barbeque was served, speeches were made, and the St. Joseph’s band played music in the background. No sooner was the celebration over than the stock company began to build White Cloud in earnest.

The new community attracted a doctor and an attorney in the same year. A post office was opened in a building that adjoined the drug store. A mill owner named Mr. Orton drove a deep well in a stockyard near the river where his fattened cattle were remarkable. Later it was found that his well was fed by natural mineral springs. Mr. C. Dorland was made the first mayor of White Cloud. The burgeoning community was quickly on its way to becoming a prominent city upon the Missouri River.

A steam ferry that was said to be one of the best along the river arrived from Wellsville, Ohio, on June 3, 1858. Operated by Captain John Lock, who lived on a long-gone island in the middle of the river north of White Cloud, the steamboat met with an accident in 1867. The riverboat was so badly wrecked that it could no longer service customers, but in May 1868, a new boat was built, and service was continued. 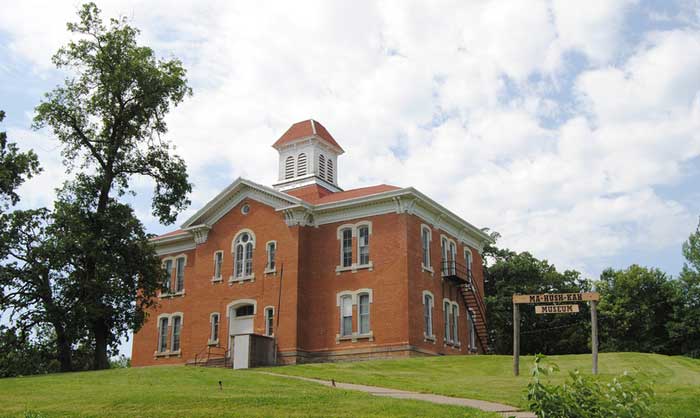 The White Cloud School is on the National Register & now serves as a museum. Photo by Kathy Alexander.

School was first taught in a small frame structure in the northwest part of the town. However, the building was struck by lightning, and the school closed for a time. A new brick school was built, and lessons resumed in February 1872.

Several churches were quickly formed, including the Methodist Episcopal Church, the First Congregational Church, and a Catholic Church. Later, the Colored Baptist Church was established in 1875.

The White Cloud City Mills were built in 1863 by John Utt, milling 120 bushels of wheat and 175 bushels of corn daily. Later, a sawmill was constructed, owned, and operated by George Adams. In 1868, Noyes & Moore built a grain warehouse near the river.

The bank of Springer & Emerson began business on March 18, 1881, where the proprietors of the bank left their cashier, a woman by the name of Annie King, mainly in charge.

On July 29, 1875, White Cloud experienced its first murder. The victim was a widow who had married a man by the name of Mr. Hurst. However, almost from the day of their marriage, their home was the scene of constant quarrels and conflicts. After the marriage, Mr. Hurst started drinking, often flying into violent rages. 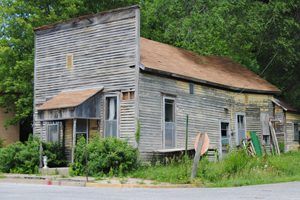 Just a week before Mrs. Hurst’s murder, her husband was arrested on the abuse charge. But upon his release, Mr. Hurst attempted to see his wife without success. Finally, he convinced the marshal to accompany him, suggesting he wished to resolve the conflict with his estranged wife peacefully.

When the two arrived, Mrs. Hurst agreed to see him. Leaning over the fence, Hurst embraced her in what appeared to be a genuinely affectionate manner, only to pull out a large knife, cutting her throat, severing her jugular vein and carotid artery.

Hurst gave himself up to the Justice of the Peace. However, news spread rapidly, and the marshal led a lynch mob. With a revolver at Hurst’s head, the marshal commanded that Hurst put his head in the noose, but Hurst refused, and a fierce struggle ensued between the marshall and the Mayor’s men. Hurst and the Marshal were jailed, and Hurst was taken to Troy to be safely lodged. Hurst was sentenced to be hanged but was later moved to an insane asylum.

According to Sarah Ann Lock, a descendant of Captain John Lock, steamboat ferry owner, and sawmill owner, John Adams, the billiard hall/restaurant close to the river on the north side of the street was once owned by her lively fiddle-playing great-grandpa LeRoy Butrick. Though Sarah is Tulsa, Oklahoma resident, she says she will always be a “White Cloud girl!” 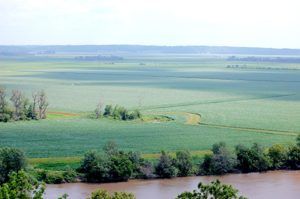 Though the population had dropped dramatically with the railroad’s arrival, White Cloud, in 1910, still supported two banks, a weekly newspaper, an opera house, and several other businesses. Stages ran daily to Forest City, Missouri. However, there were only 735 residents.

In the early 1900s, a ten-year-old boy, impressed by a traveling missionary’s sermon about lepers, decided to raise money to help a boy suffering from the disease. Raising a pig named Pete, Wilbur Chapman sold the pig, donating the $25.00 from the sale to the boy with leprosy. His compassion caught the public’s imagination and started the “Pig Bank Movement” to help lepers, and the name “piggy bank” was coined. A plaque commemorating the boy and the idea of the “piggy bank” is mounted on the Community Christian Church on Main Street.

White Cloud today is known for its many historic buildings; the entire downtown district has been placed on the National Register of Historic Places. One poignant reminder of White Cloud’s heyday is the Poulet Mansion, where you can still see the elegant design and intricate details. However, this building, as well as several others, are slowly falling into disrepair. 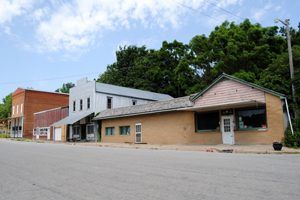 The only evident industry in White Cloud today is a grain elevator, where grain is still shipped downriver on barges to St. Joseph, Kansas City, and St. Louis. There are no open retail businesses, but the bank and the post office hang on.

White Cloud is not quite a “ghost,” as it still called home to about 115 and has a post office. However, it is easy to see that its prime is long past, evidenced by the abandoned stores on Main Street and the “closed” signs hanging in the windows. Still, this quiet little town, seemingly unaffected by the passing of time, is a lovely place to visit and get away from the hassles of the city.

For two weekends each year, one in early May, the other in late August, the streets of White Cloud are again busy. The small near ghost town is overwhelmed by visitors to the famous White Cloud Flea market, named one of the “10 best flea markets in the Nation” by McCall’s magazine.

For a few days, the old main street again is crowded with traders and customers, only to return the next day to a sleepy little village, with nothing more than a few bits of trash blowing down the empty street.

The Iowa Tribe of Kansas and Nebraska retains the rights to 2,100 acres of reservation, which straddles northeast Kansas and southeast Nebraska. The tribal headquarters are located just west of White Cloud. The tribe has engaged in gaming operations since the opening of a casino in 1998.

Hunting and fishing are abundant in the area, but much of the surrounding land is on the reservation, and visitors should check with the tribe for permission and regulations.

In the nearby town of Highland, Kansas, is the Native American Heritage Museum, which exhibits information and items from the Iowa Tribe. Housed in the old Iowa, Sac and Fox Mission building, the Museum is operated by the Kansas State Historical Society.

In early 2003, the Kansas Department of Transportation designated Highway K-7 from Leavenworth to the Kansas/Nebraska border as the Glacial Hills Scenic Byway. White Cloud is one of four communities along the byway. 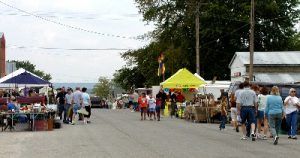