From the time the Kansas Legislature made provisions for “highways,” the state has had quite an elaborate system of roads, most of which ran along section lines.

Before the organization of Kansas Territory, there were a few well-traveled roads, notably the Santa Fe, Oregon, California, and Mormon Trails. By order of Colonel Zachary Taylor, in 1837, a commission consisting of Colonel Stephen W. Kearney and Captain Nathan Boone was appointed to locate a military road from Fort Leavenworth to Fort Coffey in eastern Oklahoma. This road, as laid out, was 286 miles long, and among the more important streams crossed were Spring River, Pomme de Terre, Wildcat, Marmaton, Little Osage, Cottonwood Creek, Marais des Cygnes, Blue, and Kansas Rivers. Fort Scott was located on this highway about midway between Forts Leavenworth and Coffey.

On May 10, 1849, Captain Howard Stansbury started from Fort Leavenworth. He laid out the military road to Fort Kearny, Nebraska, which for some distance followed the California Trail from St. Joseph, Missouri, by way of the Blue River. Shortly after the establishment of Fort Riley, a line of communication was established between Fort Leavenworth and that post, which later was extended to Fort Larned.

The Kansas Legislature of 1855 passed an act prescribing specific regulations concerning territorial roads, and in a number of separate acts provided for no less than 56 territorial roads, prominent among which were the following: Fort Scott to the Missouri line at or near Phillips’ Crossing of the Upper Drywood Creek; from a point opposite St. Joseph, Missouri, to Fort Riley, via Pawnee; from Fort Scott to the Catholic Osage Mission; from Osawkee to Grasshopper Falls; from Leavenworth to M. P. Rively’s store on Salt Creek, via the United States farm; from the Missouri state line through Cofachiqui City, then across the Neosho River and by best route to Fort Atkinson; from the Shawnee Mission Church to Tecumseh; from St. Joseph to Marysville; the Santa Fe Trail between the east line of Kansas and Council Grove; the Santa Fe Road between Fort Atkinson and Bent’s Fort, Colorado; a road from Delaware on the Missouri River to Calhoun on the Kansas River, where it divided, the left fork crossing and terminating at Topeka and the right fork intersecting the military road from Fort Leavenworth to Fort Riley.

In 1857, the legislature repealed a portion of the road law of 1855 and provided that roads might be viewed, surveyed, established, and returns made at any time within two years from the passage of several acts by which they might be authorized. Thirty-eight territorial roads were provided for by this session, among which was a road from Fort Riley to the Nebraska line; a road from Lecompton to the county seat of Allen County; the military road from Fort Leavenworth to Fort Laramie, Wyoming and the military road from Fort Leavenworth to Fort Riley.

In 1859 the “Parallel Road,” also known as the “Great Central Route” along the 1st standard parallel through western Kansas and the gold regions of the Rocky Mountains, was laid out. This highway to the Cherry Creek diggings in Colorado was 469 miles long, 641 miles to Denver, and boasted an abundance of wood and water. It was laid out by E.D. Boyd, a civil engineer, in anticipation of heavy travel from the Missouri River to the new “diggings.”

The legislature of 1859 enacted a law providing for locating and working on highways, collecting a road tax, etc. This session passed seven acts relating to roads, one of which declared all military roads within the limits of Kansas as territorial roads. The other acts provided for 17 new roads. 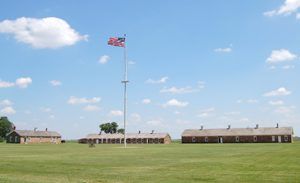 In 1860 the legislature passed acts of incorporation of the “Denver, Auraria, and Colorado Wagon Road Company,” the “Denver City and Beaver Creek Wagon Road and Bridge Company,” and the “Pike’s Peak and South Park Wagon Road Company,” a general law defining the mode of laying out and establishing roads, and an act providing that all section lines in Brown County be declared the center of all public highways. This act was the first legislation providing roads on section lines in Kansas.

The territorial legislature of 1861 passed an act declaring the military road from Fort Riley to Fort Larned a territorial road. The session of the first state legislature the same year passed five acts relating to highways and created 45 state roads.

In 1863 the legislature passed two joint resolutions, one of which memorialized Congress to make a military road from Fort Leavenworth to Fort Scott, alleging that there were no suitable bridges, culverts, or other necessary improvements by which to transport such military supplies, and believing that the safety and well being of this branch of the military required this line of communication. The other resolution memorialized Congress to bridge and improve the road from Fort Leavenworth via Fort Riley to Fort Larned. The road, at that time, was said to be without bridges, culverts, or other necessary improvements. During some seasons of the year, entirely impassable for heavy transportation, causing delay, expense, and danger to the United States military service. 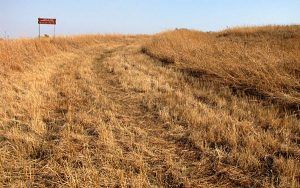 The legislature in 1864 passed three acts, one of which created 64 state roads, and in 1871 eight laws were passed relating to roads and highways, providing that all section lines of Jefferson, Cloud, McPherson, Geary, Montgomery, Chase, Morris, Mitchell, Wilson, Neosho, Anderson, Shawnee, and Dickinson Counties be public highways, excepting three townships in Jefferson County.

At almost every legislature session, from territorial days to 1912, some legislation was affecting roads and highways. Only in rare instances were any original territorial or state roads left, except those that followed section lines.

With the advent of automobiles and motorcycles, a widespread movement was started looking to improve the country’s road system. This movement met with much encouragement, and plans were made to perfect an “ocean-to-ocean highway” following the old Santa Fe Trail line across the state as closely as possible. On December 1, 1911, more than 2,000 delegates from various towns in central Kansas met at Osage City to attend the Santa Fe Trail and Pan American Highway Association meeting to decide upon the route connecting the trail between Osage City and Kansas City. A special train bearing representatives from Topeka, Lawrence, Burlingame, and intervening points, all of whom favored the route from Kansas City by way of Lawrence, Topeka, and Burlingame, were in attendance. In contrast, over 1,000 from Olathe, Ottawa, and intermediate points represented those in favor of the route by their towns. A committee composed of one member from each of the interested towns was selected to frame resolutions voicing the sentiment of the convention, their report to the convention being in favor of both routes. 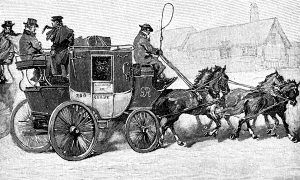 Compiled and edited by Kathy Alexander/Legends of Kansas, updated August 2022.

Overland Trails of the Frontier

Source: Most of this historic text was published in Kansas: A Cyclopedia of State History, Volume I; edited by Frank W. Blackmar, A.M. Ph. D.; Standard Publishing Company, Chicago, IL 1912. However, the text that appears on this page is not verbatim, as additions, updates, and editing have occurred.