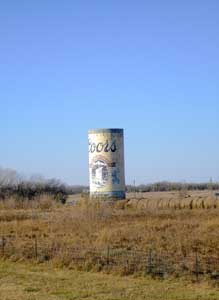 This silo painted to look like a Coors beer can stood near I-35 for years until it was removed to make way for a highway project. However, another large silo painted like a Coca-Cola can still stands in Emporia. Photo by Kathy Weiser-Alexander.

The Big Well in Greensburg

The Garden of Eden in Lucas, Kansas

You Know You’re In Kansas When …

Promoted as the World’s largest hand-dug well, The Big Well in Greensburg, Kansas has been an attraction for years. Completed in 1888, the well is 109 feet deep and 32 feet wide, and was used as the area’s water supply until 1932. In 1937 it was opened as an attraction, then in 1972, the U.S. Government designated it a National Museum. In 1974 it was awarded as an American Water Landmark by the American Water Works Association.

The visitors center and gift shop were destroyed in a devastating EF5 Tornado that practically wiped out the town of Greensburg on May 4, 2007. But, as with the rest of Greensburg, the museum was rebuilt, this time even bigger, and reopened in May 2012. 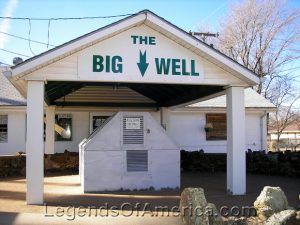 The Big Well in Greensburg Kansas, a year before the devastating Tornado of 2007. 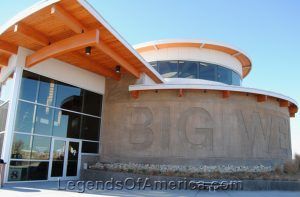 The Big Well in Greensburg, Ks after it reopened in 2012. 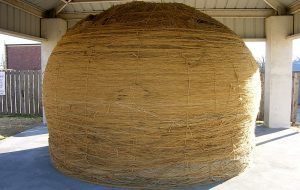 Started in 1953 by Frank Stoeber, it only took four years for it to reach 5,000 pounds and eight feet tall. Stoeber gave the oddity to the city in 1961. See more from Kansas Travel here. 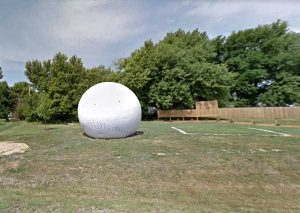 Muscotah, Kansas is called home to the largest baseball in the world. The 20-foot-wide baseball was created in 2013 from an old steel water tower tank with rebar for stitches. It was built In memory of local hall-of-famer Joe Tinker, who helped win the 1908 World Series for the Chicago Cubs. Photo courtesy Google Maps.

Legends of Kansas — Kansas In Depth