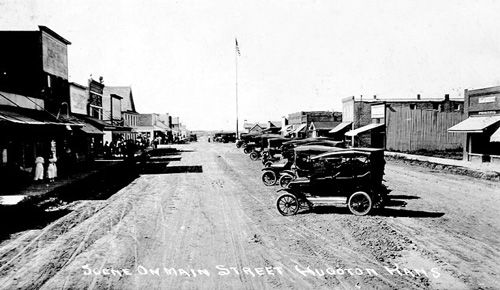 In the month of May 1886, the writer was one of a party of buffalo-hunters bound for the Neutral Strip and the Panhandle of Texas, where a small number of buffalo still remained at that time. We traveled across the entire southwestern part of Kansas, below the Santa Fe railroad, at a time when the great land boom of 1886 and 1887 was at its height.

Town site schemes in western Kansas were at that time innumerable, and a steady stream of immigration was pouring westward by rail and wagon into the high and dry plains of the country, where at that time farming remained a doubtful experiment. In the course of our travels, we saw one morning, rising before us in the mirage of the plains, what seemed to be a series of crenelated turrets, castles peaked and bastioned.

We knew this was but the mirage, and knew that it must have some physical cause. But what was a town doing in that part of the world? We drove on and in a few hours found the town — a little, raw boom town of unpainted boards and tents, which had sprung up almost overnight in that far-off region. The population was that of the typical frontier town, and the pronounced belief of all was that this settlement was to be the commercial metropolis of the Southwest. This little town was later known as Woodsdale, Kansas. It offered then no hint of the bloody scenes in which it was soon to figure; but within a few weeks it was so deeply embroiled in war with the rival town of Hugoton as to make history notable even on that turbulent frontier.

Mr. Herbert M. Tonney, now a prosperous citizen of Flora, Illinois, was a resident of that portion of the country in the stirring days of the land boom, and became involved to an extent beyond his own seeking in this county seat fight. While serving as an officer of the peace, he was shot and left for dead. No story can serve so well as his personal narrative to convey a clear idea of the causes, methods and results of a typical county seat war in the West.

“I do not need to swear to the truthfulness of my story, for I have already done so in many courts and under the cross-examination of some of the ablest lawyers in the country. I have repeated the story on the stand in a criminal case which cost the United States government more money than it has ever expended in any similar trial, unless perhaps that having to do with the assassination of President Lincoln. I can say that I know what it is to be murdered.

“In March, 1886, I moved out into southwestern Kansas, in what was later to be known as Stevens County, then a remote and apparently unattractive region. In 1885 a syndicate of citizens of McPherson, Kansas, had been formed for the purpose of starting a new town in southwestern Kansas. The members were leading bankers, lawyers, and merchants. These sent out an exploration party, among which were such men as Colonel C. E. Cook, former postmaster of McPherson; his brother, Orrin Cook, a lawyer; John Pancoast, J. B. Chamberlain, J. W. Calvert, John Robertson, and others. They located a section of school lands, in what was later known as Stevens County, as near the center of the proposed county as the range of sand dunes along the Cimarron River would permit.

“Others of the party located lands as close to the town site as possible. On August 3, 1886, Governor Martin issued a proclamation for the organization of Stevens county. It appeared upon the records of the State of Kansas that the new county had 2,662 bona-fide inhabitants, of whom 868 were householders. These claimed a taxable property, in excess of legal exemptions, amounting to $313,035, including railroad property of $140,380. I need not state that the organization was wholly based upon fraud. An election was called for September 9, and the town of Hugoton — first called Hugo — was chosen. 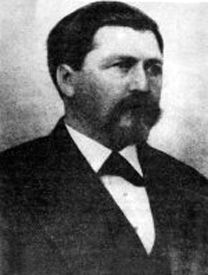 “There can be competition in the town-site business, however. At Meade Center, Kansas, there resided an old-time Kansas man, Colonel Samuel Newitt Wood, who also wanted a town site in the new county. Wood’s partner, Captain I. C. Price, went down on July 3 to look over the situation. He was not known to the Hugoton men, and he was invited by Calvert, the census taker, to register his name as a citizen. He protested that he was only a visitor, but was informed that this made no possible difference; whereupon, Price proceeded to register his own name, that of his partner, those of many of his friends, and many purely imaginary persons. He also registered the families of these persons, and finally — in a burst of good American humor — went so far as to credit certain single men of his acquaintance with large families, including twenty or thirty pairs of twins! This cheerful imagination on his part caused trouble afterwards; but certain it is that these fictitious names, twins and all, went into the sworn records of Hugoton — an unborn population of a defunct town, whose own conception was in iniquity!

“Price located a section of government land on the north side of the sand hills, eight miles from Hugoton, and this was duly platted for a town site. Corner lots were selling at Hugoton for $1,000 apiece, and people were flocking to that town. The new town was called Woodsdale, and Colonel Wood offered lots free to any who would come and build upon them. Settlers now streamed to Woodsdale. Tents, white-topped wagons and frail shanties sprung up as though by magic. The Woodsdale boom attracted even homesteaders who had cast in their lot with Hugoton. Many of these forgot their oaths in the land office, pulled up and filed on new quarter sections nearer to Woodsdale. The latter town was jubilant. Colonel Wood and Captain Price, in the month of August, held a big ratification meeting, taunting the men of Hugoton with those thirty pairs of twins that never were on land or sea. A great deal of bad blood was engendered at this time.

“Soon after this Wood and Price started together for Garden City. They were followed by a band of Hugoton men and captured in a dugout on the Cimarron river. Brought back to Hugoton, a mock trial was held upon them and they were released on a mock bond, being later taken out of town under guard. A report was printed in the Hugoton paper that certain gentlemen of that town had gone south with Colonel Woodand Captain Price, ‘for the purpose of a friendly buffalo hunt.’ It was the intention to take these two prisoners into the wild and lawless region of No Man’s Land, or the Panhandle of Texas, there to kill them, and to bring back the report that they were accidentally killed in the buffalo chase. This strange hunting party did go south, across No Man’s Land and into the desert region lying around the headwaters of the Beaver. The prisoners knew what they were to expect, but, as it chanced, their captors did not dare kill them.

“Meantime, Woodsdale had organized a ‘posse’ of twenty-four men, under Captain S. O. Aubrey, the noted frontier trailer, formerly an Indian scout. This band, taking up the trail below Hugoton, followed and rescued Wood and Price, and took prisoners the entire Hugoton ‘posse.’ The latter were taken to Garden City, and here the law was in turn set at defiance by the Woodsdale men, the horses, wagons, arms, etc., of the Hugoton party being put up and sold in the court to pay the board of the teams, expenses of publication, etc. Colonel Wood bought these effects in at public auction.

“By this time, Stevens county had been organized and the Hugoton ‘pull’ was in the ascendancy. A continuance had been taken at Garden City by the Hugoton prisoners, who were charged with kidnapping. The papers in this case were sent down from Finney county to the first session of the District Court of Stevens county. The result was foregone. Tried by their friends, the prisoners were promptly discharged.