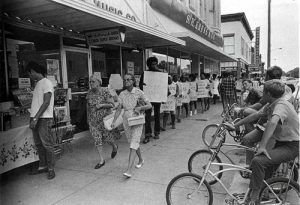 A protest in Cairo, from the book, Let My People Go: Cairo, Illinois 1967-73, by Jan Peterson Roddy, photo by Preston Ewing Jr. Most of these buildings are gone now, and in their place is a large empty lot.

To counteract the White Hats, the black community formed an organization called the United Front of Cairo in 1969. Fighting back, the coalition spawned an intense civil rights struggle to end segregation and create job opportunities. Residents were helped by what local whites called “outside agitators,” including the Reverend Jesse Jackson.

In April 1969, Lieutenant Governor Paul Simon and a special committee, appointed by the Illinois House of Representatives, began to investigate the events occurring in Cairo. The Illinois General Assembly soon ordered the White Hats to disband and called for the enforcement of civil rights laws and racial integration of city and county departments.

Even though the state government had become involved, white residents continued to hold mass meetings in public parks, while the African-Americans held Civil Rights rallies in various churches.

In September 1969, Cairo’s mayor issued a statement prohibiting the gathering of two or more people, all marches, and picketing. However, the black protestors continued to protest. A federal court would later rule the mayor’s proclamation unconstitutional. Though both the federal and state governments had gotten involved, they were ineffective in controlling the continued segregation and inequality that existed in Cairo.

The demonstrations and violence continued into the 1970s, producing more than 150 nights of gunfire; multiple marches, protests, and arrests, numerous businesses bombed, and more declaring bankruptcy. 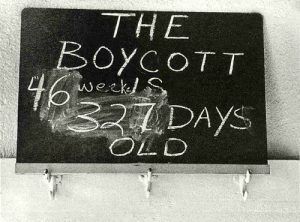 By 1971, there was very little left to picket as most of the downtown businesses had closed in Cairo. Photo from the book Let My People Go: Cairo, Illinois 1967-73, by Jan Peterson Roddy, photo by Preston Ewing Jr.

By 1970 the population had dropped to a little over 6,000 people and by the following year, there was very little left to picket as most of the downtown businesses had closed. For those establishments that remained, the boycott continued for the rest of the decade.

Once Commercial Street was lined with businesses — a Hallmark store, the Mode-O-Day, the Khourie Brothers Department Store — in front of which, stood the Hamburger Wagon serving up popcorn, greasy burgers, and flavored sodas. Other retail stores such as  Florsheim Shoes, a music store, photography studio, banks, auto dealerships, gas stations, and restaurants all flourished. Lining the street were elegant old street lamps. They are all closed now and most of the buildings are gone.

Elsewhere in the city, some 40 small neighborhood grocery stores once thrived. On our visit in 2010, we could find not a single open grocery store. Cairo’s residents were once entertained by numerous speedboat races on the Ohio River, as half the town sat on the concrete levee wall watching. Not any more. Another entertainment venue — the Gem Theatre — closed its doors forever in 1978 after operating for nearly 70 years.

Cairo’s 44-bed hospital closed in 1986, the town soon lost its bus service, and in 1988, the City of New Orleans, operating on the rail line, made its last stop. Though the passenger depot originally built by the Illinois Central Railroad still stands, the trains no longer stop for passengers. 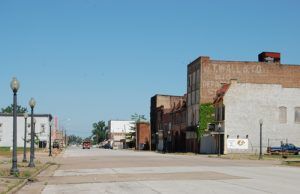 Commercial Avenue in Cairo is all but empty today. On the right side of the street, these buildings once held the W.T. Wall & Co Department Store, the Cairo Public Utility Commission; M. Snower & Co., a garment manufacturer; and more. On the left side, where the empty lots are today, once held a Hallmark Store, the S.H. Kress & Co. Variety Store, a music store, and more. At the far end of the left side of the street, the Rhodes-Burford Furniture Store sign was still in place. It was one of the last large businesses to close. By Photo by Kathy Weiser-Alexander.

In the end, Cairo would become the city that died from racism. By 1990, the town sported a population of little less than 5,000. It’s citizens tried valiantly to save the town when Riverboat Gambling was legalized the same year. Enacted partially to revitalize dying towns, it was the perfect opportunity for little Cairo to have a second chance. However, the State of Illinois, instead, awarded the license to nearby Metropolis, some 40 miles northwest on the Ohio River, dashing all hopes of the town’s opportunity to revitalize its economy and population. By the year 2,000, Cario’s population had dropped to only about 3,600 residents. Today, it is called home to about 2,200 people.

Preston Ewing Jr., Cairo’s unofficial historian, former president of the local NAACP chapter, city treasurer, and participant in the Civil Rights Movement in Cairo, described the town as “poor, black and ugly.” Further, not having unrealistic expectations, he said, “Our goal should be to stabilize Cairo, not talk about growth. Potential employers will go where there is greater viability and an infrastructure to support businesses.” In fact, things were so bad in 1990, that the Cairo High School graduating class was advised to leave the town by its principal.

Built to support a population of over 15,000 people, Cairo is a semi “ghost town” today, by the definition — any historical town or site that leaves evidence of its previous glory. A third of its population are below the poverty line. The city is predominately African-American at almost 72%, compared to Caucasian at about 28%. The median income for a household in the city was just $21,607 in the 2000 census and the town continued to face significant socio-economic challenges including education issues, high unemployment rates, and lack of a commercial tax base, which all contribute to the sadness of Cairo.  In the 2010 census, the median income for a household in the city dropped to $16,682. 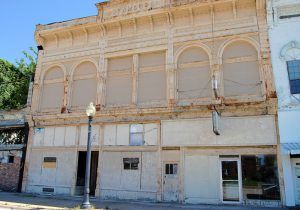 Famous Building at 702-704 Commercial Avenue served as a general-purpose commercial building, housing a mercantile establishment on the ground floor and offices above. The building still stands today. By Kathy Weiser-Alexander.

The city and its residents have worked hard over the recent years to stabilize the small town; however, these attempts are often short-lived, as there is simply no money. The real estate in Cairo is cheap, and many, intrigued by the prospect of building a business, have taken the opportunity to start in Cairo. But, business is slow as residents wonder why these businesses have started in their small town. Additionally, many residents see these newcomers as temporary – being too used to people coming to help and then leaving. After years of turmoil, Cairo’s residents are often untrusting.

For many years, there were efforts to promote the area for tourism — focusing on its rich history, magnificent river views, and historic buildings. However, lack of money has continued to hurt the town. South of Cairo, the historic site of Fort Defiance, which was once an Illinois State Park that was given over to the City of Cairo, is now abandoned. Everywhere, there are dismal reminders that less than 2,500 people now live in a city designed for many more. Alexander County is one of the poorest in Illinois. Without businesses that pay taxes, the town and county simply cannot afford to provide basic services, much less promote itself. Many of its residents are tired of telling the story of their blighted town and just simply want to be left alone.

In the last decade, numerous buildings have been torn down in Cairo in the interests of safety and “cleaning up” the city. The most recent demolishment includes the Elmwood and McBride housing projects that were in were in poor condition, that were razed in 2019. This demolition created a housing crisis for numerous residents which created yet another blow to this isolated rural town. Unfortunately, what’s left after decades of white flight and economic stagnation, is an expanse of abandoned buildings, bulldozed lots, and forgotten history.

Still, this historic city provides history buffs and photographers with opportunities to explore Cairo’s historic downtown, beautiful churches, and government structures that continue to stand. The community continues to fight for its existence and hopefully, these efforts will work as the clock continues to tick on Cairo, that without revitalization, is destined to become a true “ghost town.” 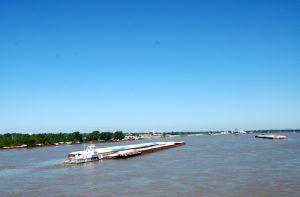 The Ohio River at Cairo, Illinois is still busy today by Kathy Weiser-Alexander.