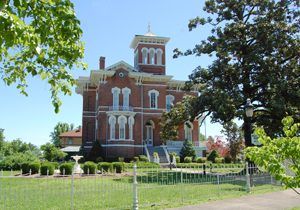 The Magnolia Manor in Cairo, Illinois was built by the Cairo businessman Charles A. Galigher. Photo by Kathy Weiser-Alexander.

The mansion became an outstanding social center during the 1870s and reached the peak of its fame on April 16, 1880, when ex-President and Mrs. Grant were guests there for two days following their world tour. In the years following this visit, the Galighers and later owners continued to welcome guests in the big mansion among the magnolias.

The house was acquired by the Cairo Historical Association in 1952 and is now operated as a museum located at 2700 Washington Avenue. The mansion was listed on the National Register of Historic Places in December 1969.

Another large 19th-century home called Riverlore, built by Captain William P Halliday, is located across the street from Magnolia Manor. Featuring a Greek theatre, complete with pillars. This mansion; also listed on the National Register of Historic Places, is now owned by the City of Cairo and is open for tours. 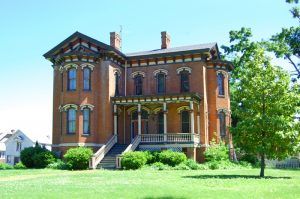 Another lovely home on Millionaires Row by Kathy Weiser-Alexander.

In fact, this entire residential neighborhood is listed on the National Register of Historic Places, as it is filled with imposing mansions along the magnolia-shaded streets that stand testament to Cairo’s heydays as a Mississippi River port. Washington Avenue, where many of these historic homes are situated, has long been referred to as “Millionaire’s Row.”

During this time of growth, most of the African-Americans worked as unskilled laborers, but, were not afraid to speak out. They were known to have participated more effectively in union organizations, strikes, and demonstrations than did the white workers. Black women, who were overwhelmingly employed in household service, also struggled for workplace justice by contesting their white employer’s exploitative demands. Initially, the black population supported the Republican Party until they perceived that white Republicans resisted black demands for equal education, government jobs, and more black legislators. The white citizens retaliated by using the law, customs, and sometimes, violence, to reassert their white supremacy. 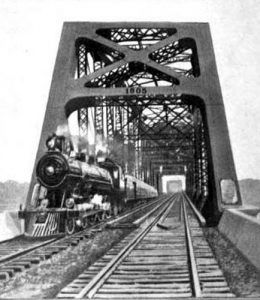 Opening of the Thebes Bridge, May 1905

In 1890, Cairo’s population had reached some 6,300 people and not only was a popular river town but, also boasted seven railroad lines branching through Cairo. Unfortunately, by this time, the city was also experiencing increased racial polarization, tension, and violence, which inhibited black activism until the Great Depression.

In the meantime, Cairo was still growing. Though steamboat traffic was dropping, more efficient barges were being utilized and the overall traffic dramatically increased on the Ohio River. In 1900 alone, the Ohio River transported more than 14 million tons of goods and people, a number that would not be surpassed until 1925.

Though the vast majority of the cargo traveling along the Ohio and Mississippi Rivers was not being delivered to Cairo; but, rather, headed for other large cities, the town was thriving as it exported considerable products from its lumber mills, furniture factories, and other businesses.

Though Cairo wouldn’t reach its peak population until 1907, at over 15,000 residents, the turn of the century was forecasting the signs of decline. One of its biggest businesses in the city was the many ferries that crossed the both the Ohio and Mississippi Rivers, which transported hundreds of thousands of railroad cars each year. Until 1889, there was no railroad bridge crossing either the Ohio or the Mississippi River at or near Cairo. That changed; however in 1905, when a railroad bridge was completed across the Mississippi River at Thebes, a small town northwest of Cairo. This dealt a heavy blow to Cairo’s status as a railroad hub. Traffic soon shifted to the new bridge at Thebes, decreasing the traffic through Cairo and completely eliminating the ferry operations. 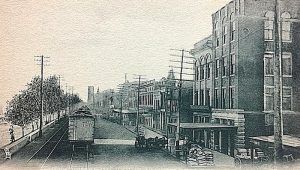 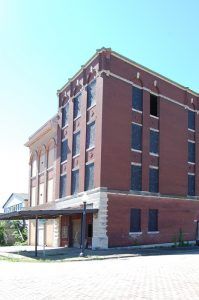 Amazingly, the two buildings at the far right in the 1906 image to the left, still stood in 2010. Unfortunately, they were demolished in 2012. Photo by Kathy Weiser-Alexander. 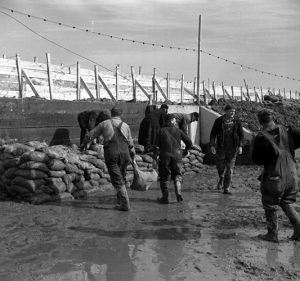 Before long, the railroads began to bypass the city and severe problems were created by water seepage on the low-lying land. The problem was so severe that one of Cairo’s mayors claimed it was the most serious obstacle preventing prosperity for the town. Many citizens began to consider their community as an economic failure and even newspaper editorialists commented on how businessmen preferred to rent homes as opposed to buying them: “They preferred to rent because they regard their stay in Cairo as temporary.”

The first decade of Cairo’s 20th-century history was also marred by an extremely violent episode which occurred on November 11, 1909. On that date, Cairo was the scene of one of the most gruesome lynchings in American history when a black man named Will James, who was accused of murdering a shop-girl, and a white man, who was charged with murdering his wife, were lynched by a mob, which numbered in the thousands.

Will “Froggy” James, an African-American man, was charged with the rape and murder of white 22-year-old Annie Pelley, who worked as a shop clerk in Cairo. A report soon circulated that James had confessed to the crime, also implicating an accomplice by the name of Alexander. Though the people asked for an immediate trial, the case was put off by the court. Anticipating trouble, the local Sheriff kept James hidden in the woods for two days in the hope of saving him from the vengeance of the townspeople. However, the angry citizens tracked James down in the woods near Belknap, Illinois, some 29 miles northeast of Cairo. The infuriated mob forcibly took James from the Sheriff’s custody and returned him to Cairo. He was then taken to the most prominent square at 8th and Commercial Street to be hanged before thousands of cheering spectators. Just before the rope was placed around James’ neck, he reportedly said, “I killed her, but Alexander took the lead.”

In response, the crowd jeered: “We don’t want to hear him; string him up; kill him; burn him.” James was hanged from an arch at 8:00 pm. However, when the rope broke, James was riddled with bullets. The body was then dragged by a rope for a mile to the scene of the crime and burned in the presence of at least 10,000 people. Many women were in the crowd, some of whom helped to hang and drag the body. His remains were then cut up for souvenirs before burning the rest. His half-burned head was then attached atop a pole in Candee Park at the intersection of Washington Avenue and Elm Street. The next morning, nothing was left of his body other than bones. 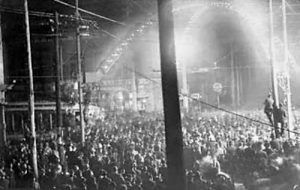 With their blood-thirst boiling, part of the mob then went in search of James’ named accomplice – Alexander. However, they evidently didn’t find him, if such a man ever existed. In the meantime, the other part of the mob fled to the county jail, where they hammered at the cell of a man named Henry Salzner, for more than an hour. Salzner, a local photographer, had been charged with murdering his wife with an ax in August. The prisoner pled for mercy while protesting his innocence, but it was to no avail. The bars finally gave way, and the prisoner was dragged to a telegraph pole at Washington Avenue and 21st Street. He was lynched at 11:15 p.m. and once dead, filled with bullets. Salzner’s body was left in the street and claimed by his father the next day.

The mob remained in a frenzy and order was restored only after Governor Charles Deneen ordered eleven companies of the National Guard to proceed to Cairo. By morning, all was quiet, the mob had dispersed, and only a few persons, on the lookout for Alexander, were lurking about the streets. However, hundreds of men continued to search the riverfront, breaking into freight cars in the hope of finding Alexander.

During the mob chaos, the Mayor and the Chief of Police were being guarded in their homes, as the infuriated mob threatened them.

The very next year, in 1910, a sheriff’s deputy was killed by another mob attempting to lynch a black man accused of snatching a white woman’s purse. Again, the National Guard was called in and martial law implemented until order could be restored.