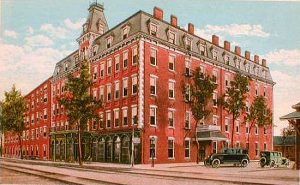 By 1861, when the Civil War began, Cairo’s population had increased to 2,200, of which, only 55 people were African-American. The port quickly became a strategically important supply base and training center for the Union army. For several months, both General Ulysses S. Grant and Admiral Andrew Foote had headquarters in the town. Several federal regiments were also stationed there during these turbulent years.

The Confederacy also realized its strategic importance. Knowing this, Illinois Governor Richard Yates immediately shipped 2,700 men with 15 pieces of field artillery, plus several six-pounders, and one twelve-pound cannon to Cairo from Springfield. More troops were stationed nearby and by June 1861, 12,000 Union soldiers were in and around Cairo. Another 38,000 men were stationed within a 24-hour ride. 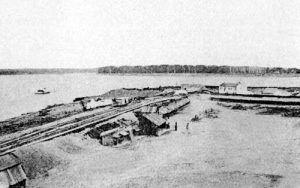 In order to further strengthen Cairo as a military camp and as a naval base, Yates sent yet more artillery to the city in the fall of 1861, which included 7,000 new guns, 6,000 rifled muskets, and 500 rifles, and 14 artillery batteries of artillery. The soldiers then built 15 foot high levees around the city, making it a formidable installation.

At the very tip of the peninsula, south of Cairo, Camp Defiance was established near the river bank, and Camp Smith was located just a short distance to the north. Camp Defiance was first called Fort Prentiss, after the Union officer Benjamin Mayberry Prentiss, who had served honorably in the Mexican-American War.

Initially, the post consisted of a flat-topped mound upon which were placed three 24-pound cannons and an 8-inch mortar. The site also included a command house and a ship’s mast for the colors. The name was later changed to Camp Defiance when General Ulysses S. Grant arrived. 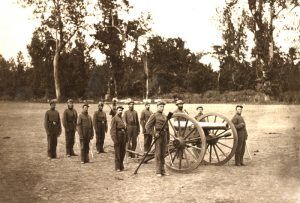 Lines of sentries were posted along the levees, and all boats along the river were stopped and searched. Camp Defiance became an important supply depot for General Grant’s Western Army and a naval base, as the Union and Confederacy battled for control of the lower Mississippi River. The Union shipped supplies from Chicago to the far tip of Illinois via the Illinois Central Railroad, fueling Grant’s push deep into the Confederacy and altering the course of the Civil War.

The city itself became an enormous military camp with a huge parade ground and clusters of barracks on all sides. The fortified city quickly gained the attention of the entire country, drawing many reporters to observe the military build-up and spurring The New York Times to refer to Cairo as “the Gibraltar of the West.” 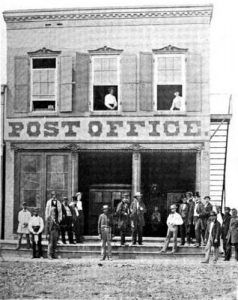 Generals Ulysses S. Grant and John A. McLernand standing on the steps in the center, of Cairo’s post office in 1861.

But, the troops who were stationed in Cairo did not like the location. The low flat land was extremely muddy and the town was prone to flooding, despite the levees. The climate was humid, disease-carrying mosquitoes and rats were everywhere, and to make matters worse, unscrupulous business operators were known to cheat and even rob many of the troops. One soldier described Cairo this way:

“I have witnessed hog pens that are palaces compared with our situation here.” Anthony Trollope, a renowned English novelist visited the city in 1862 and wrote: “the inhabitants seemed to revel in dirt… the sheds of soldiers… bad, comfortless, damp and cold.”

During the Civil War, a number of businesses were established for the soldiers and citizens including stables, a hospital, and a wheelwright shop. Along the west side of the Ohio River, a number of saloons and brothels sprang up that served the military personnel until they were closed down by General John A. McLernand in October 1861. Just to the west, on Commercial Avenue, sat the firms of Koehler’s Gunshop, a drug store, the city’s post office, the popular Athenaeum Theater, a blacksmith and a harness shop. A block south of this site was the huge parade grounds.

Though the fortified city never saw any attacks during the Civil War, it trained and shipped thousands of soldiers who would fight in numerous battles. Cairo’s real “war” would not begin for another century. 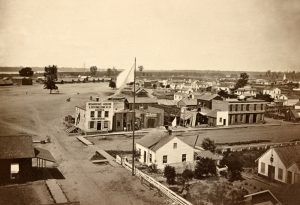 When the Civil War was over, Camp Defiance and most of the military buildings were dismantled. Many years later, the site of Camp Defiance would become Fort Defiance Park, an Illinois State Park. However, today, the park is owned by the city of Cairo. Unfortunately, it is abandoned, overgrown, and completely run down. At the time this story was written (2010), the road into the park is impassable due to flood damage.

The Civil War dramatically changed the city’s social, cultural and demographic landscape with the arrival of thousands of runaway slaves, which the government referred to as “contrabands.” Additionally, in 1862, the Union Army deposited large numbers of African-Americans in Cairo until government officials could decide their fate. These many black men, women, and children lived in a “Contraband Camp” established by the Army. The camp was later abandoned when the African-Americans found little work and having no money to buy farms, many returned to the South and became sharecroppers.

When the war was over, the city became a staging area for many of the freed slaves arriving from the South. Many of these people also returned to the South or moved elsewhere, but, more than 3,000 decided to remain in Cairo. The decidedly southern influence of most of the white residents and the large influx of African-Americans would spawn racial tension that would last for well over a century. During the next two decades, Cairo’s African-Americans banded together to form a new society complete with their own institutions and culture, especially as they found themselves facing prejudice and hatred from white citizens. 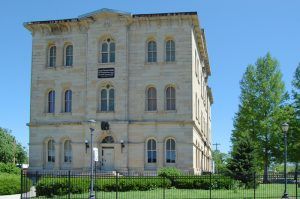 Cairo Customs House, now a museum, houses one of the greatest volunteer-driven museum collections in Illinois. Photo by Kathy Weiser-Alexander.

In the meantime, Cairo continued to grow due to the high river traffic. In fact, there was so much river traffic that the Federal Government designated Cairo as a Port of Delivery and began to make plans to build a United States Customs House. The building was designed by Alfred Mullett, who also designed the San Francisco Mint, the US Treasury Building, and old State Department building in Washington, D.C.

Opened in 1872, the building also held a U.S. Post Office on the first floor, which became third in importance in the nation at that time because of its mail connections to and from the emerging West. The second floor housed various government agencies, and a Federal courtroom was on the third floor. Called the “Old Custom House” today, it continues to stand as a museum and is listed on the National Register of Historic Places. It is located at 1400 Washington Avenue.

Also completed in 1872, was Magnolia Manor, which was built by Cairo businessman, Charles A. Galigher, beginning in 1869. Galigher was a prosperous early miller who owned Chas Galigher & Co., Cairo City Mills, and an extensive ice factory before the Civil War began in 1861. He was also a personal friend of General Ulysses S. Grant and supplied the Union Army with flour and hardtack during the war.

The Victorian house is an ornate example of the prosperity of the era during which it was constructed. The 14-room home was built using locally fired red brick with substantial wood trim and stone. Ornamental cast-iron decorates the verandas and the ornate exterior cornice and eaves brackets are of wood millwork. After the house was completed, it was widely admired for its architecture and its setting. The walls were made of double brick, with a ten-inch air space between to keep out the dampness. A high, white fence enclosed the original grounds and many magnolia trees were planted.