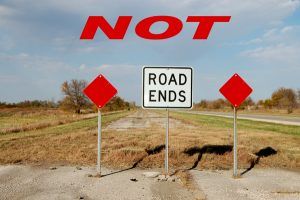 For the most part, Illinois Route 66 glides evenly and easily through the state in a southwest diagonal alignment between Chicago, Illinois and St. Louis, Missouri. The Illinois section of historic Route 66 has a relatively level alignment and has never offered motorists the thrilling or terrifying switchbacks, dips, and cuts encountered along the southwestern portions of the Mother Road. Unlike many other segments of Route 66, Illinois Route 66 runs through a densely populated, highly developed State. By the mid-1920s, Illinois already had a considerable infrastructure, including a modern road network.

When officially commissioned in 1926, Illinois Route 66 simply took over State Route 4, a pre-existing, heavily-used fully paved or “slabbed” two-lane road between Chicago and St. Louis. Thus, while the national span of Route 66 would not be completely paved until 1938, the Prairie State could boast from the very start that its segment of the Mother Road was mud free and “slab all the way.”  Due to population and development pressures over the years, Illinois Route 66 received constant ongoing repairs, upgrades, widening, resurfacing, and even rerouting. A distinguishing feature of the history of Illinois Route 66 was the speed of its evolution. From its very first years, engineers worked to bypass as many rural towns as possible to ensure a speedy and unobstructed flow of the ever-increasing traffic between Chicago and St. Louis. Thus from the time of its birth, Illinois Route 66 was already moving away from its classic main street course toward the model of its interstate successor and its own demise. 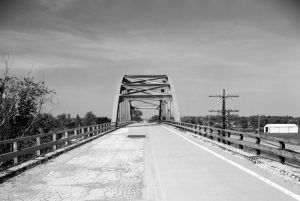 Bridge in Braceville, Illinois by the Historic American Buildings Survey

With the designation of Route 66 as a strategic defense highway during World War II, the process of change accelerated. While traffic to and from the great ordnance factories outside Chicago was critical to feeding the nation’s hungry war machine, it also devastated the Route 66 roadbed, which had not been built to sustain the constant flow of the heavy load bearing munitions trucks. Even as the war raged, the road received significant upgrading, much of it pointing toward the four-lane limited access interstate system of the 1950s. The role of the Federal Government, especially its far-reaching Federal Defense Highway Act of 1941, was critical in the funding of these efforts.

The story of the road’s evolution left its mark upon people’s lives. Every change in the Mother Road type and its route meant something good or bad for the people along the road. A major rerouting could bring welcomed business and travelers to the new corridor, but it also could painfully wound the areas left behind. The modern upgrade to a four-lane, limited access road was a boon to motorists but could spell disaster to the bypassed roadside establishment. 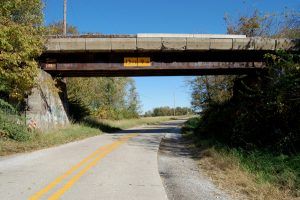 Route 66 in Illinois is a very tenacious road. Although decommissioned in 1977, the Prairie State’s portion of the Mother Road endures, often under new designations, and all but about 13 miles of the final alignment remains traversable. The six road segments below are listed in the National Register of Historic Places. Individually and collectively, they offer the traveler insights into the engineering achievement and evolution of the road in Illinois. In terms of their period of historic significance, the segments of Route 66 Carpenter Park, Illinois Route 4/North of Auburn, and Route 66 from Girard to Nilwood, evoke the engineering and transportation developments of the 1920s and 30s. The segments of Alternate Route 66 — Wilmington to Joliet, Cayuga to Chenoa, and Litchfield to Mount Olive, are significant as wartime and postwar upgrades during the years 1942 to 1955. Road segments are listed geographically east to west. 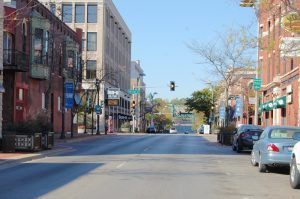 Alternate Route 66, Joliet to Wilmington (1942-1956) – This road segment, currently designated Illinois Route 53, stretches for 15.9 miles between Joliet and Wilmington. The original 1920s era road served as an Alternate Route 66 around Joliet. The impacts of World War II and the Federal Government are central to this segment’s story. Due to the punishing wartime traffic to and from the nearby Kankakee and Elmwood ordnance plants, the original two-lane highway was replaced with a limited access four-lane divided highway constructed between 1942 and 1945. It was authorized and funded by the Federal Defense Highway Act of 1941. In order to sustain the wear and tear of wartime traffic, updated construction methods were applied, including the application of a special sub-base of gravel and stone on top of the older roadbed, and a divided 24-foot wide roadbed with 10-inch thick Portland cement slab.

This segment remained a major transportation artery until the coming of interstate I-55 after 1956. Aside from a new macadam overlay, much of the road’s original 1945 character remains. Travelers should look for the 1942 Union Pacific Overpass near the northern end of the segment’s boundary and four remaining box concrete culverts. To travel this section, begin at Patterson Road in Joliet and travel south on Highway 53 toward Wilmington. The course ends at the junction of Highway 53 (Alternate Route 66) and Illinois Route 102 (Water Street) in downtown Wilmington. 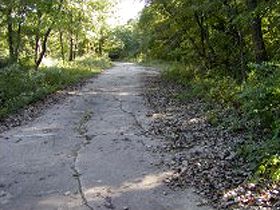 Route 66 by Carpenter Park, Springfield (1922-1936) – This short, surviving segment of abandoned roadbed, extending for about one quarter mile on the north bank of the Sangamon River in north Springfield, offers the traveler the sensation of visiting not only a road but an archeological site, for it has not seen automobile traffic since 1936. The two-lane, 16-foot wide road reflects the prevailing engineering and design methods of its time of construction in 1922. It is also a good example of how existing paved roads were merely redesignated Illinois Route 66 at the Mother Road’s inauguration in 1926.

In 1922, this 16-feet wide roadway was paved with a mix of cement and gravel, with expansion joints placed every 30 yards. Parts of the road are still flanked by its original four-foot gravel shoulders and four-inch curbs. This segment’s life as Route 66 was short, for almost immediately, engineers began work on a new, wider (four-lane) alignment a few yards to the east, which was completed in 1936. The Carpenter Park segment remains largely intact because it has not carried traffic since 1936, although it is missing its Old Iron Bridge over the Sangamon River.

With the decommissioning of the road in 1936, the bridge was dismantled, leaving only concrete abutments. This segment is now a part of Carpenter Park on the far north side of the city of Springfield, Illinois. Visitors are welcome to walk on this stretch of Route 66 surrounded by a forest preserve of native hardwood. The entire segment is contained within the boundaries of the park. The 322-acre park is also an Illinois Nature Preserve, owned by the city of Springfield and overseen by the Illinois Department of Natural Resources. 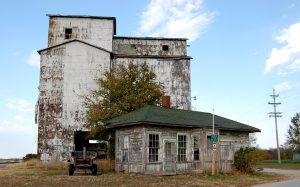 Route 66, Cayuga to Chenoa (1943-44; 1954-55) – The original 1920s state-of-the-art pavement of this segment boasted a width of 18 feet and a Portland cement slab six inches deep. Like the Alternate Route 66 between Wilmington and Jolie, this 18.2-mile segment stretching from Cayuga to Chenoa proved woefully inadequate to carry the burden of Route 66’s World War II mission. The excessive weight and volume of wartime traffic wreaked havoc on the thin roadbed, necessitating a serious upgrade. A 1943-44 wartime makeover included two lanes of 24-foot wide, ten-inch thick concrete. The sections were generally striped for 11-foot driving lanes (an extension of two feet over the older pavement). The southbound lanes, constructed directly over the older roadbed, were finished in 1944, and the northbound lanes were completed in 1954-55, together creating a four-lane highway with a center median. Today the northbound lanes have a new macadam overlay, but the southbound lanes retain, for the most part, their original concrete surface. The segment retains six historic bridges. To travel this segment from Odell, go south on Odell Road toward Pontiac to Cayuga. From Cayuga, take Pontiac Road into Pontiac. Follow the gradual curve right, then curve left onto Division Street. Cross North Creek, then curve right onto Lincoln, and left onto Ladd Street. Cross the junction with Howard. At Reynolds, turn right with Highway 116. Turn left onto Bypass 66 and follow the Frontage Road through to Chenoa.