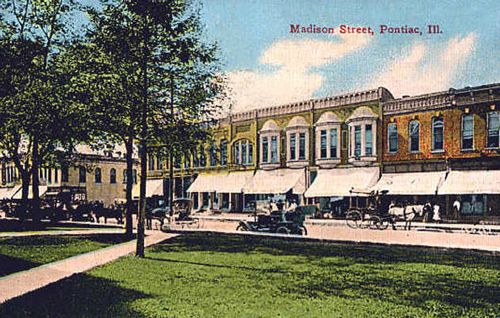 One of Route 66’s Red Carpet Corridor Communities, Pontiac has much to offer for the Route 66 Roadie and the history buff alike.

Prior to the coming of white men, the plains around Pontiac were home to Illinois, Potawatomi, and Kickapoo Indians. There were a few traders of European descent who traveled through the territories prior to the arrival of the first settlers in about 1829. Livingston County was established by an act of the Illinois congress in February of 1837 and within no time, a commission met and selected a site that was owned by three early Pontiac settlers.

The three settlers, who included Henry Weed, Lucius W. Young, and Seth M. Young, laid out a townsite and agreed to contribute $3,000 for the erection of public buildings, as well as donating land for a public square, a jail and a pen for stray domestic animals. They also promised to build a bridge across the Vermilion River. The town was named for the Ottawa Indian Chief, Pontiac. Though Pontiac had waged war on white settlers invading Ottawa for some 60 years, he was much admired by both whites and Native Americans alike. 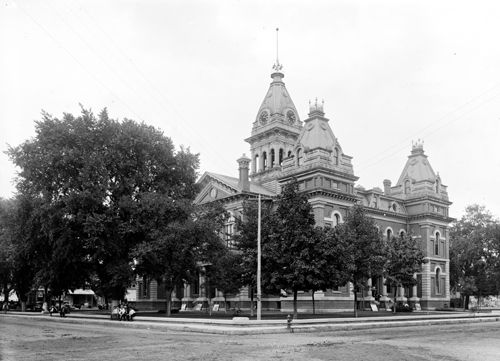 Once Livingston County was organized, a two-story frame courthouse was completed in Pontiac in 1842 and located on the public square. It continued to serve the county until a new building was built in 1856. Unfortunately, a fire destroyed the second courthouse, but a third was completed in 1875, which still stands today and is listed on the National Historic Register.

Having some of the richest farmland in the nation, Pontiac thrived with an agricultural economy, growing wheat, corn, and other staple crops. Later, it developed a number of manufacturing facilities, bringing further prosperity to the town. These included shoe and boot manufacturers and the Allen Candy Company with its famous “Lotta Bar.” The advertising slogan for this confection was, “A Lotta Bar for 5 cents.”

Early on, Pontiac developed a rich cultural heritage, beginning with the Folks Opera House that featured a number of artists who traveled the circuit from Chicago, Illinois to St. Louis, Missouri.

The community grew steadily but prospered even more when Route 66 barreled through in 1926. Happily, the community quickly provided services and amenities to the many travelers of the historic road. 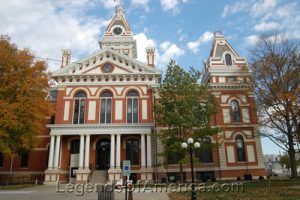 Today, this city of some 12,000 people provides several historic points of interest including the Livingston County Courthouse built in 1875, the Jones House built in the 1850s, and the Old City Hall Shoppes, all of which are listed on the National Register of Historic Places.

While in Pontiac, make sure you stop by the Route 66 Association Museum and Hall of Fame, which provides Route 66 artifacts, pictures, and literature capturing years of adventure on the old route. The museum was built inside a refurbished firehouse, which is also listed on the National Register of Historic Places. It’s also home to the late Bob Waldmire’s bus and van. Waldmire was a noted Route 66 Artist and Icon who died in late 2009.  Also here, is the Old City Hall Shoppes and the Livingston County War Museum. It is located at 110 W. Howard Street.

Also take a look at the gun-shaped Illinois State Police District 6 Headquarters. The building is constructed in the shape of a pistol and served as the base for state troopers who patrolled roads from Dwight to McLean. In 2003, it was vacated when a new state police headquarters was built nearby. It was inducted into the Route 66 Hall of Fame in 2000 and listed on the National Register of Historic Places in 2007. It is located at 15551 Old U.S. 66 on the south side of town. 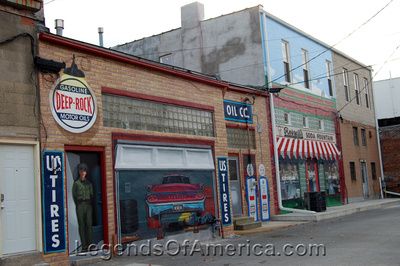 The old Log Cabin Inn is still open for business in Pontiac. This is a classic old restaurant that got its start back in 1926 and has been entwined with Route 66 ever since. It used to face the early alignment of Route 66; However, when Route 66 had it’s old alignment changed to the other side of the building it was jacked up and turned around. Later, a newer building was constructed right next door. The old building now serves as a residence. It is located at the intersection of Pontiac Road, which was once two-lane Route 66, and the newer four-lane Route 66 on the north edge of town at 18700 Old Route 66.

Another interesting stop is the International Walldog Mural & Sign Art Museum, which is dedicated to the preservation and appreciation of the outdoor wall advertising signs painted in the days before electronic mass media. These painters called themselves “Walldogs.” It is located at 217 N. Mill Street.

Pontiac’s downtown district includes a number of shopping and dining opportunities. While in the downtown area, check out the murals of cars and trucks painted by local artists. 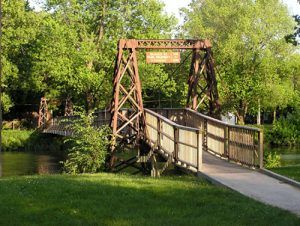 One of the town’s spectacular features is its three swinging bridges over the Vermillion River. One bridge connects Riverview Drive and Play Park. It was built in July 1898 by the Joliet Bridge Company with an iron structure, 190 feet long and 4 feet wide and supported by cables swung from masonry piers. The current bridge is a wooden structure. The second connects the Play Park and Chautauqua Park and was built in 1926. The third connects the south side of Play Park and Riverside-Humiston Park.

A city of about 12,000 people today Pontiac has been recognized by the National Main Street program, numerous Governor’s Home town awards, and Time Magazine as one of the best small town in the country.

In this area, there are several old alignments and sections of the road that can be seen but no longer traveled. Closed bridges and overgrown asphalt abounds in the area.

Pontiac is located about 92 miles southwest of Chicago. 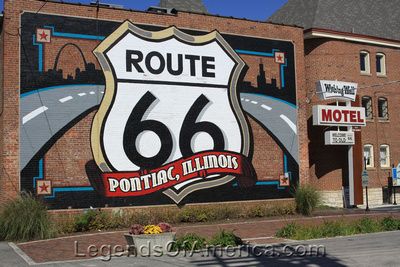