Abraham Lincoln sits in a covered wagon welcoming visitors to his namesake town, by Kathy Weiser-Alexander. 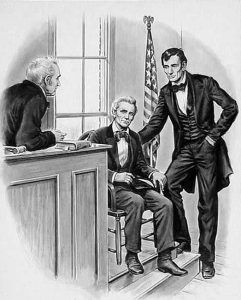 Abraham Lincoln in court in Illinois in 1841.

Lincoln, Illinois, the county seat of Logan County, is the only town in the United States that was named for Abraham Lincoln before he became president. Route 66 also runs through the city, which displays numerous historic landmarks.

In the 1830s, this area was popular among settlers due to its location and easy access to Kickapoo, Salt, and Sugar Creeks and its abundance of wildlife. In 1835, a man named Russell Post established a settlement called Postville, and four years later, it had grown enough to become the Logan County seat in 1839. A simple frame courthouse was built in the Federal style in 1840. When it opened, it housed offices for the sheriff, coroner, recorder, surveyor, county clerk, commissioners, and justice of the peace. Citizens came to the new courthouse to pay taxes, register their deeds, list strayed livestock, and conduct legal business with the circuit court.

In the meantime, Abraham Lincoln, a self-taught lawyer, passed the bar in 1836, and in 1837, he moved to Springfield, where he became a junior partner with John T. Stuart. Like most lawyers of his day, he traveled the circuit to make a living, as most communities were too small to support resident lawyers. Lincoln most likely handled civil cases in Logan County, but little is known of Lincoln’s legal work because the court records were destroyed in an 1857 fire. What is known is that his work in Logan County bolstered a very successful legal career and helped set the stage for later political successes. 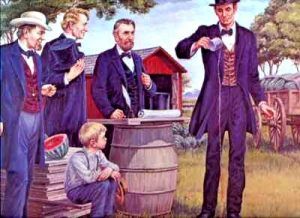 In 1848, Postville lost the county seat to Mt. Pulaski, 11 miles to the southeast, and Postville declined. However, when the Chicago and Alton Railroad came through in 1853, the tracks were located about a mile east of Postville. In no time, a new community sprang up in the vicinity of the railroad.

The town’s developers, Robert Latham, Logan County Sheriff, John D. Gillett, a cattleman, and Virgil Hickox, director of the railroad, proudly asked their distinguished attorney, Abraham Lincoln, who also served as the railroad’s attorney, if he would agree to have the town named after him. Though Lincoln agreed, he reportedly also cautioned, “You’d better not do that, for I never knew anything named Lincoln that amounted to much.” When the town was officially christened on August 27, 1853, Lincoln himself had the honor of doing so with the juice of a watermelon.

The first public sale of lots in Lincoln was held on August 29, 1853. Abraham Lincoln rode the train from Springfield, along with numerous prospective buyers. At the sale, 90 lots, ranging from $40 to $150, were bought by new prospective residents. The new town of Lincoln thrived, soon encompassing the old site of Postville, and in 1855, Lincoln gained the county seat back from Mt. Pulaski. A new courthouse was built in 1858. The old Postville Courthouse was sold for $300 to Solomon Kahn, who used the building briefly as a store and later as a post office. As decades passed, the old courthouse was used as a private home. 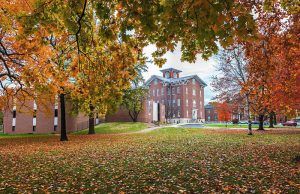 University Hall was the first building constructed at Lincoln University. Today it still stands at Lincoln College, courtesy of Wikipedia.

Lincoln University, a private four-year liberal arts college, was founded in early 1865. Lincoln University was the first institution named for Abraham Lincoln and the only one during his lifetime. In 1929, it became a community college granting two-year degrees, and its name changed to Lincoln College. It continues to operate today.

In 1877, the Illinois Asylum for Feeble-Minded Children was established in Lincoln. The large Victorian Gothic Revival building, located on 40 acres, became one of the city’s largest employers. Over the years, several buildings were added in the Georgian and Tudor styles of architecture. The school became a self-reliant facility, with its power plant, farm, kitchen, bakery, hospital, nursing school, greenhouses, fire department, and jail. At various times, the residents made mattresses, shoes, and brooms. Others worked at caring for other residents, campus upkeep, and worked in the laundry. During the Great Depression, many of those housed at the facility were not developmentally disabled but were just poor and committed. 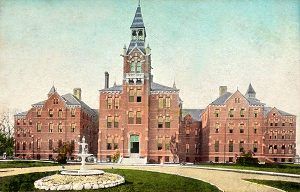 The institution changed its name to the Lincoln State School in 1954, at which time it was becoming extremely overcrowded, housing as many as 5,700 residents. In the following years, resident numbers dropped, and by 1971, the facility housed 2,600 residents. Its name changed to the Lincoln Developmental Center in 1975. In 1978, the farm annex was closed and became home to the Lincoln Correctional Center.

By the year 2000, the Lincoln Developmental Center was called home to just 383 residents with a staff of 698. It was closed in 2002 by Governor George Ryan amidst reports of abuse, neglect, and preventable deaths. As a basis for his determination, he cited four safety-related incidents involving patients. Employee and parent groups said the incidents were minor and not typical of this institution and did not constitute life-threatening conditions. They took their case to court to keep the facility open but lost in September 2002. Since then, the old facilities have sat vacant except for usage for training purposes by the state police and the correctional facility.

Farming was the initial basis of Lincoln’s economy; however, that changed when coal mines began to be built in the area. Before long, numerous new businesses that provided hardware, building materials, food, and professional services sprouted up in the community. 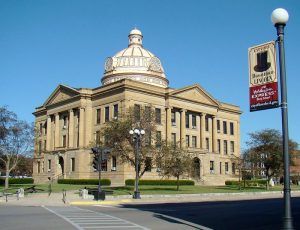 In 1905, a new three-story domed Logan County Courthouse was built of stone in Lincoln. By that time, the 1858 courthouse had fallen into decay could not be saved.

In August 1929, automobile magnate Henry Ford purchased the old Postville courthouse and its one-block site for $8,000. Ford planned to dismantle the structure, move the pieces to Michigan, and rebuild it as a Lincoln memorial at his Greenfield Village in Dearborn. By the end of September, the old courthouse had been dismantled, and every stone was gone. The Postville Courthouse was rebuilt in time for the grand opening of Greenfield Village on October 29, 1929, and continues to stand today in Dearborn, Michigan. 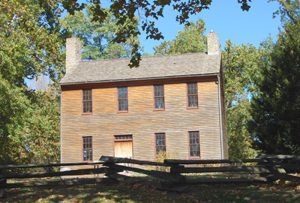 After dismantling the old courthouse, Henry Ford donated the block, to be used as a park, to the Logan County Historical Society. However, for two decades, the block stood empty. During Lincoln’s centennial in 1953, the city of Lincoln presented the block to the State of Illinois as the first step in creating a Lincoln memorial.  The state soon began constructing a replica courthouse on the original site, and in 1956 a local museum collection was installed on the first floor. The second floor was furnished as a mid-19th-century courtroom and offices. Today, it is the Postville Courthouse State Historic Site located at 914 Fifth Street.

The century-old Logan County Courthouse sits on the square in downtown Lincoln, surrounded by stores and restaurants that speak of its vintage past. The old courthouse is one of the few historic courthouses in the state that is still being used for its intended purposes. Be sure to check out the number of repainted old advertising and murals on Lincoln’s downtown buildings. 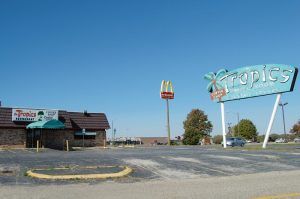 Tropics Restaurant and its iconic sign in Lincoln, Illinois by Kathy Weiwer-Alexander.

Route 66 runs right through the town center, where visitors will get numerous glimpses of the era. At the corner of Woodlawn and Lincoln Parkway once stood the Tropics restaurant and lounge that opened in 1950. It was built by Vince Schwenoha, who was inspired by the palm trees in California, which appeared on the iconic sign he put at the restaurant. It was sold to Lew and Bev Johnson five years later, who ran it for the next 40+ years. Though the Johnsons made it famous, they also suffered during the decades due to fires in 1965 and 1975, and after Route 66 was replaced with Interstate 55. Afterward, the Tropics experienced several closings and re-openings through the years until it finally closed for good in 2004. The building sat empty and abandoned for years until it was sold in 2014, and the sign was removed. However, it was safely placed in storage. The old structure was torn down in April 2017 to make way for a new McDonald’s restaurant. Though the building is gone, its historic neon sign was saved, restored, and now stands with its neon fully lit at its original site. Some of its vintage memorabilia can still be seen in the Mill Museum. 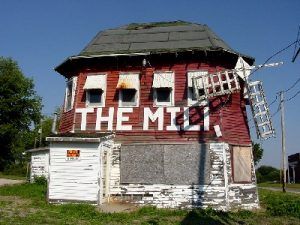 At 738 Washington, the Mill Museum is contained in what was once called the Old Mill Restaurant that became famous for its schnitzel shortly after it started business in 1929. Family-owned and operated, it served thousands of Route 66 travelers until 1996, when it closed its doors. Over the years, the building badly deteriorated and, in 2005, was slated for demolition. However, the following year, a “save-the-mill” campaign began, and in 2007, the renovations on the building began.

Today, Lincoln is called home to some 14,500 residents.

Route 66 travelers can continue their journey down the old highway by traveling through the small towns of Broadwell, Elkhart, and Williamsville.