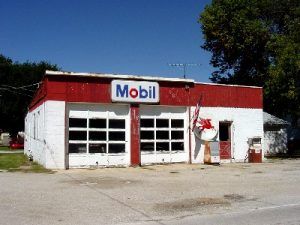 About 85 miles into your Route 66 journey from Chicago, you will come to the small and quaint town of Odell, Illinois. Here, you’ll see several classic Mother Road structures and other historic buildings in this picturesque community.

When you first enter Odell, look for the old Mobil Station on the west side of the highway. Long closed, this old station, with its galloping red-winged horse, speaks of better times along the old route. Next to the station sits a very attractive home where vintage gas pumps decorate the yard. Obvious Route 66 fans, these people know how to make the most of their location right along the Mother Road.

While in Odell, an absolute must-see is the historic Odell Standard Oil Station, built in 1932. The land was first purchased by Patrick O’Donnell, who built the station based on a 1916 Standard Oil of Ohio design.

It was built with a canopy in the same manner as numerous other Standard stations and other brands. The station originally sold Standard Oil products and gas for 20 cents per gallon to the many travelers of Route 66.

In the late 1940s, O’Donnell added a two-bay garage to the building to accommodate garage and repair services, which were necessary to stay competitive with the nine other stations that occupied the short stretch of Route 66 through Odell. Later O’Donnell leased the property to others, who began selling Sinclair and Phillips 66 products. 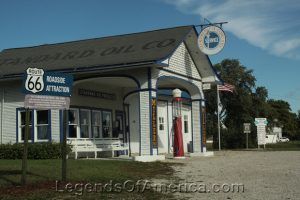 Another view by Jim Hinckley.

The station continued to operate until the 1960s, when it discontinued selling gas and was used as a body shop until 1975.

In 1997, the station was listed in the National Register of Historic Places. Then, due to the collaborative efforts of the Illinois Route 66 Association, the Village of Odell, Illinois State Historic Preservation Office, the National Park Service Route 66 Corridor Preservation Program, and Hampton Inn Landmarks, it was restored to its former glory. 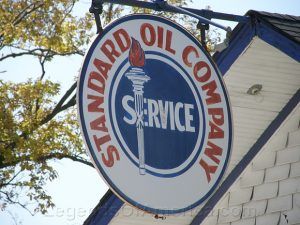 Standard Oil Station in Odell, Illinois, has been restored for the pleasure of Route 66 Travelers. Photo by Judy Hinckley.

A Standard Oil sign hanging from the roof swings gently in the warm breeze, and an old-fashioned gas pump looks ready to serve the next customer. Although Odell’s Standard Oil Gas station no longer sells gasoline, it has become a welcome center for the Village of Odell. The station won the National Historic Route 66 Federation Cyrus Avery Award in 2002 for the year’s most outstanding Route 66 preservation project. The historic station is located at 400 S. West Street.

During Route 66’s heydays, the highway was so busy that an underground passage had to be built so that churchgoers and schoolchildren could cross the busy pathway. However, in 1947, when the four-lane bypass was built, and the tunnel was no longer needed, it was filled in. A marker now designates the spot. 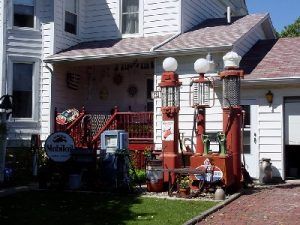 While in Odell, the small town provides a couple of hometown restaurants, including Pour Richards, Rentz’s, and the Wishing Well Cafe.

As you continue the dozen miles to Pontiac, keep your eyes open for the restored Meramec Caverns barn on the right side of the road about five miles before you enter Pontiac.