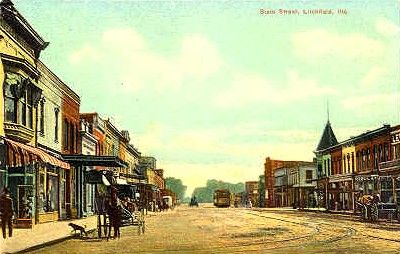 When the Terre Haute, Alton and St. Louis Railroad announced that they were going to come through the area, the town of Litchfield was born. In the late fall of 1853 the County Surveyor, Thomas Gray, laid out the town in a cornfield purchased by the Litchfield Town Company. Soon 80 acres of cornfields and prairie grass became 236 lots for sale.

About two miles southwest of the site of Litchfield, another settlement called Hardinsburg was also founded in anticipation of the coming railroad. However, when it was determined that the railroad would bypass Hardinsburg’s 50 residents in favor of Litchfield, its residents began to move their buildings, on runners over the prairie grass, to Litchfield.

The first to arrive was a man named J. M. McWilliams, who moved his small store and house from Hardinsburg in January 1854. By the time the railroad reached Litchfield in the fall of 1854, most all of the citizens of the doomed Hardinsburg had relocated to the new town of Litchfield.

On April 4, 1856, Litchfield formally incorporated its village, and soon elected trustees and appointed its first Justice of the Peace and Police Magistrate.

When the Civil War started in April 1861, Litchfield was the first town in Illinois to respond to the President’s call for men.

In 1875, the first hospital was established by the nuns from the Order of St. Francis. This has since grown to a 138-bed facility dedicated in 1971. 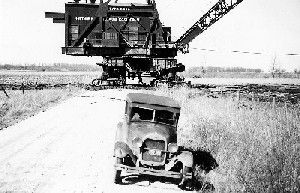 In the 1880’s, two coal mines were started in the area which soon put many men to work and provided another boost to Litchfield’s economy. Soon, another discovery was made of a small pocket of oil and Litchfield became the site of the first commercial oil production in Illinois. However, the oil was soon exhausted.

As the years passed, Litchfield gained five more railroads which gave a further boost the town. Today, two of those remain, including the Chicago, Burlington and Quincy and the Norfolk Southern.

When the Mother Road came through Litchfield, the town sprouted a number of cafes, motels and tourist stops. Along the western edge of Litchfield, two alignments can be traveled through the town. Parts of both original highways remain intact and attract many Route 66 enthusiasts with their multiple vintage icons. 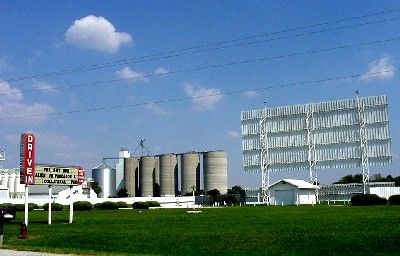 When you first enter Litchfield, check to the left at 1200 N Old Route 66 to the see the Litchfield Skyview Drive-In, which is still in operation today. The Route 66 Hall of Fame inductee opened in the spring of 1951 and has been in operation for each season since. The drive-in opens in April and closes in October, subject to the weather. Holding seasonal hours, the old movie “theatre” is open seven nights per week from Memorial Day through Labor Day. Prior to and after these dates, they are open on Friday, Saturday, and Sundays only. The Sky View Drive-In Theatre is the last operating drive-in on Historic Route 66 in Illinois. 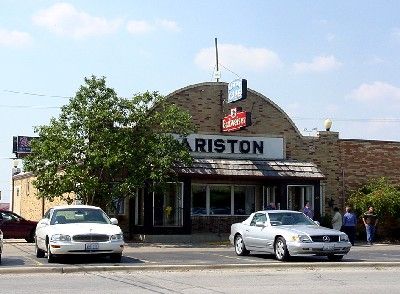 Another vintage icon is the Ariston Café, in business since 1924. Originally, the café was started in nearby Carlinville by Pete Adam; however, when the Mother Road was rerouted, Pete leased a new building in Litchfield in 1929. But it didn’t take long before the Ariston’s great reputation for service, excellent food, and unbelievable desserts required another move. Relocating across the street in 1935, Pete built his own building, that still stands today, providing the same wonderful food and great service that it has for more than eighty years. In June of 2018, the cafe was sold to new owners, marking the first time the Ariston has been owned outside the Adam family.

Just across the street from the Ariston Cafe, you see a vintage sign for the Vic Suhling “Gas For Less Sign.” Now, instead of getting gas for less, you just get “less gas,” as the sign is all that is left of this old gas station. An interesting note is that the gas station once stood on the very site of the first Litchfield Ariston Café. 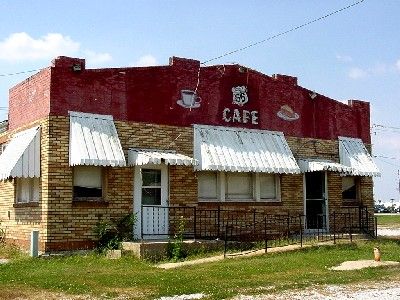 Just down the road is the Route 66 Café, which like the Ariston Café, is still in business. An old gas station next to it, behind which, on the newer alignment through Litchfield, is the Belvidere Motel. This old motel operates more like apartments today, offering weekly and monthly rates.

Litchfield, like many other small towns along the Mother Road, has a lot of community pride and celebrates Route 66 from both a historical aspect, as well as what it means to the city today. This is evident in the care they spend in promoting the Mother Road and their preservation of vintage icons. In June of every year, Litchfield hosts the Route 66 Classic Car Festival.

Enjoy your stay in Litchfield and if you’re traveling the Mother Road, keep on heading south towards another old mining town – Mt. Olive. And, as always, kick up some asphalt and enjoy the ride!