At the conclusion of the Mexican-American War in 1848, few Americans realized or even dreamed of the vast mineral potential of the territories they had so recently wrested from their Mexican neighbors. Fewer still would have thought that southwestern Colorado, an area spurned because of its rugged terrain, severe winter climate, and hostile Ute Indians, would be crisscrossed by miners and prospectors, and that permanent settlement would be so rapid. From the beginnings of the Territorial Period, in 1861, southwestern Colorado was a mineral resource frontier that invited exploitation.

The history of early southwestern Colorado mining, up to the Ute removal in 1881, can be summarized by three basic stages: early gold placer mining near Baker’s Park and in the Tin Cup mining district during the early 1860’s; the era of silver mining along the Animas River around Silverton and in the Elk Mountain region of modern Gunnison County during the early 1870’s; and the development of hard-rock mining throughout the San Juan country, along with the growth of the Gold Brick mining district on Quartz Creek, near present-day Pitkin in Gunnison County, in the late 1870’s and early 1880’s. In 1858 and 1859, the first Colorado Gold Rush took place when the William Green Russell party found “colors” while prospecting along Cherry Creek, Ralston Creek, and Newlin Gulch, near present Denver. In July 1859, at the Gregory Diggings near Blackhawk, the first “arrastra”, a Spanish ore-crushing device, was built. At the same time, placer gold was found and worked at Buckskin, Mosquito, Hamilton, Tarryall, Montgomery, and Fairplay on branches of the South Fork of the South Platte River. In 1860, a second and larger rush into the central Rockies occurred. Most prospectors headed to the Gregory diggings near Central City, which, being overcrowded, caused the diffusion of miners in all directions.

Outfitted in California Gulch, a prospecting party led by Charles Baker, acting on persistent rumors of mineral wealth in the San Juan Mountains, moved into that rugged region during the spring of 1860. Reports of rich finds made their way back to the more established camps, and several hundred eager treasure seekers followed Baker to the San Juan country in the upper Animas River Valley. In April 1861, prospectors spread out from “Baker’s Park” and began diggings nine miles north in Eureka Gulch. Baker’s earlier reports had, by this time, proved misleading, for placer operations were not effective in bringing satisfactory returns. In May of 1861, the camp at Baker’s Park broke up and many of the prospectors moved south to the fertile Animas River Valley. Animas City was laid out and several buildings were constructed. Most of the prospectors gave up, however, and with the outbreak of the Civil War many of these early miners, Baker included, were drawn into service for the Confederacy. Despite the lack of substantial discoveries on the first major prospecting expedition into the San Juan mining district, it was apparent that southwestern Colorado’s mineral resources were located in a broad belt that stretched diagonally across the territory from the San Juan country in the southwest to the Elk Mountains along the Continental Divide, in the northeast. 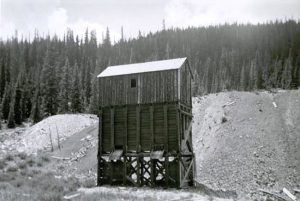 Gold was first discovered in the Tin Cup District of present Gunnison County when in 1860 Jim Taylor, and then in 1861 Fred Lottis, led parties across the Continental Divide from Granite, Colorado, and worked placer gold fields in the region. Evidence of early mining activity was apparent near present Waunita Hot Springs, approximately 25 miles east of Gunnison, where rotted flumes used in earlier placer mining were discovered in the 1870s. The first true mining camp in the Gunnison country, Minersville, in Washington Gulch just north of the present-day town of Crested Butte, had a population of about 200 in 1861. During 1862, nearly 1,000 prospectors swarmed into the area and took out close to a million dollars in gold by placer mining. By 1863, with the placers played out, and due to the increasing hostility of the Ute Indians, most of the camps were deserted. Not until 1872, when discoveries of silver-bearing rock were made in the Elk Mountains, would large-scale mining operations in the area resume. 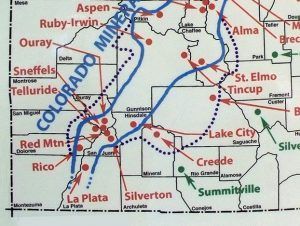 Little in the way of mineral exploration took place in southwestern Colorado during the mid-1860’s because of diminished placer gold deposits and the absence of permanent settlement in the region. Yet the fact that mining had been undertaken on the western slope served as a constant reminder of potential mineral wealth. Although Baker’s Park and the San Juans were well within the boundaries of the Ute Reservation, (established in 1868), efforts to prospect the region resumed in 1869. This time prospectors came from the west, when Adnah French and Dempsey Reese, coming from Arizona, prospected along the Dolores River. By 1870, they reached the Animas River, moved into Baker’s Park, and began diggings near present Silverton. At the same time a party composed of Sheldon Shafer and Joe Flarhieler, traveling along the Dolores River on their way to Montana from Santa Fe, located what is now part of the Shamrock, Smuggler and Riverside lodes of the Atlantic Cable Group, which they named The Pioneer.

In 1870 and 1871, two major discoveries in the San Juan region caused further mining excitement. The location of the Little Giant Mine in 1870, on the north side of Arrastra Gulch about four miles northeast of modern-day Silverton, and the discovery of rich silver veins along Henson Creek that were to comprise the Ute and Ulay lodes just west of present-day Lake City brought prospecting parties into the area. During the early 1870’s, numerous mining expeditions searched the Elk Mountains between present-day Crested Butte and the mouth of Rock Creek. The Benjamin Graham and the George and Lewis Waite parties both prospected in and around the Schofield Pass and Crested Butte areas, where silver deposits were located. Jim Brennan, a miner from Denver, became intrigued by the tales of mineral wealth in the Elk Mountains. In 1872, he led a small group of treasure seekers into the rugged Elk range and found fissure veins, which were reported to be of enormous size. The rumors of large ore bodies that followed such prospecting expeditions as Waite’s, Graham’s, and Brennan’s led to the first scientific mineral exploration of the Gunnison country. Doctor John Parsons, in 1873, explored the mineral and agricultural resources of the area with the intention of erecting an ore reduction plant on Rock Creek. Accompanying Parsons was a geologist, Sylvester Richardson, who discovered silver along Spring Creek, east of modern Crested Butte and also large coal deposits west of that future town, along Ohio Creek. Based on the quality and extent of the minerals he located, Richardson intended to establish a settlement with easy access to those discoveries. This early plan climaxed in the building of Gunnison City some years later.

Mining in southwestern Colorado during the early 1870’s, as had been the case in the 1860’s, was basically exploratory. The one difference was the realization that the location of the region’s mineral resources, rather than in gold placer deposits along the streams and rivers, lay in veins, deep within the mountainous terrain. Despite the richness of the discoveries and the establishment of numerous mining camps in southwestern Colorado during the early 1870’s, several years passed before the prospecting pioneers were bold enough to winter or face the ever-present threat of Indian attack within the region. Through the early 1870’s, miners, each fall, retreated east across the Continental Divide from the San Juans, wintered in Del Norte or Saguache, Colorado, and then returned in the spring to resume work on their claims. To most miners, however, limited and seasonal operations were unacceptable. Transportation routes, advanced mining equipment, and permanent settlements were needed.