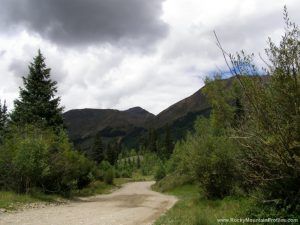 Situated at the head of the valley in which the Lake Fork of the Gunnison River rises, along the Hinsdale-San Juan County line is Burrows Park. It gained its name for Charles Burrows who prospected the area in 1873.

Today, this high five-mile-long grassy meadow area encompasses what was once a number of mining camps, including Burrows Park, Whitecross, Tellurium, Argentum, and Sterling. Their exact locations are difficult to establish since almost all signs of the camps have disappeared. All the mining camps sprang to life between 1875 and 1880 following the rich ore strikes in the vicinity.

The first camp to be established was Tellurium City in July 1875. It was named after an ore found in the area. A post office was established the same year. The camp was located near the junction of Adams Creek and the Lake Fork of the Gunnison River near the head of Burrows Park. It was described by the Silver World newspaper in July 1875 as having: “a population less than 500 men and enough valley vocalists (burros) to make the night hideous.” During its heyday, an expensive mill was built and an elaborate townsite was laid out. But, by 1880, it was already a ghost town.

Argentum was creatively named for the argentiflour ores found in the area. It had a post office by 1876. The camp had two stores, three hotels, a blacksmith shop, and 12 cabins. Nearby was a sawmill and the Whitecross Mine. Its post office closed in 1882. It was located on the northeast side of the Lake Fork just above its confluence with Silver Creek and in the lower end of Burrow’s Park. 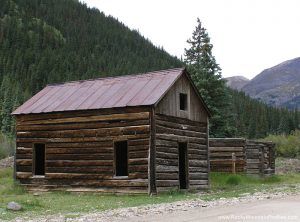 The mining camp of Burrows Park was located in the valley and the Whitecross camp was located about a quarter of a mile above it. A post office was established in 1880 as Burrows Park, but it was actually at Whitecross. The name of the post office was changed to Whitecross in 1882. Mail was delivered daily from Lake City by pack animal. The community even had mail service in the winter, when a man named Tom Byron crossed Cinnamon Pass daily on snowshoes or skis carrying mail to Animas Forks and to Mineral Point. Whitecross boasted the Hotel de Clauson, which was the favorite meeting place for all of the neighboring camps. Whitecross was named after a nearby mountain with a noticeable white cross in a geological formation. In 1900, Whitecross had a store, saloon, hotel, boarding house, and two stables.  At that time, around 300 men received mail at the White Cross post office.

There was another mining camp called Sterling in the area, but we were unable to find any information on the community.

The Park Mining District located at Burrows Park flourished in the mid-1870s, at which time a mill was built by the Gunnison Mines Company. There were about 30 mines in the area including the LaBelle, Bon Homme, Champion, Baltimore, Philadelphia, Great Ohio, Japanese, Isolde, Undine, Napoleon, Oneida, and Premier. About a mile above Burrows Park was a sizable reduction works to separate the minerals from the rock. During this period the mines employed about 200 miners.

On average, the communities of Burrows Park maintained a summer population of about 200 but were nearly always deserted in the winter due to its elevation of 10,700 feet. Three 14,000 foot peaks are nearby. Red Cloud and Sunshine to the north and Handies to the southwest.

The area was served by a stagecoach line from Lake City with a fare of $3.00. The stage also made its way to Animas Forks, with the cost of that hair-raising, ten-mile ride, at $1.50 either way.

Poor roads, remote location, elevation, and limited ore in the area all contributed to the demise of the mining camps. 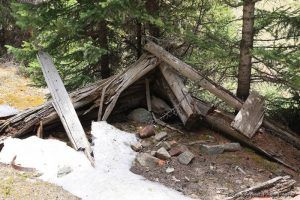 Along this meadow, once stood clusters of hotels, blacksmith shops, saloons, roadhouses, meat markets, general stores, sawmills, homes, and mining ventures. Today, there is little left in this picturesque setting. Two cabins, restored by the forest service, are the starting point for the hike to several nearby fourteeners. In the mountains can be found traces of foundations and the remains of fallen buildings.

Burrows Park is located along the Alpine Loop Back Country Byway about 20 miles southwest of Lake City, Colorado.