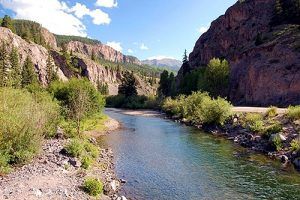 Lake City, Colorado, is the Hinsdale County seat and started as a supply camp for the area mines. It is located in the San Juan Mountains in a valley formed by the convergence of Henson Creek and the Lake Fork headwaters of the Gunnison River.

Before the flood of American miners entered this region, it had long been the territory of the Ute Indian tribe. The area was first explored by Lieutenant John C. Fremont and Captain John W. Gunnison. After the Colorado Gold Rush of 1858, several men pushed westward into the area but were pushed back by the hostile Ute Indians.

The first white men to travel into the immediate region of Lake City were Joel K. Mullen, Albert Mead, Charles Goodwin, and Henry Henson, who passed through in August 1871 and located minerals where the Ute-Ulay Mine would later be developed.

In September 1873, American officials met with Chief Ouray of the Ute tribe and finalized the Brunot Treaty. The treaty placed the Ute on a reservation in Utah and opened up the San Juan Mountains to white settlement. 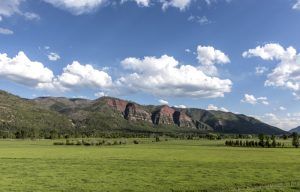 The San Juan Mountains in southwest Colorado by Carol Highsmith.

In the winter of early 1874, Alfred Packer and five other men made an ill-fated trip through the area and nearly froze to death. Parker was the only one to make his way out safely and was accused of cannibalism. He was later tried, convicted, and sentenced in Lake City. The massacre site is located about two miles south of Lake City on Colorado Highway 149, indicated by a historical marker.

In connection with Otto Mears, Enos Hotchkiss, a wagon road builder, constructed a thoroughfare from present-day Saguache to Lake City in 1874. In August, Hotchkiss discovered and staked a great lode above Lake San Cristobal. The Hotchkiss Mine would later become the Golden Fleece Mine.

Enos Hotchkiss built the first cabin in the area of Lake City and became one of the first county commissioners of Hinsdale County.

Lake City was platted on 260 acres in the fall of 1874, and by the end of the year, reduction works were operating there. The town was named for nearby Lake San Cristobal. Early on, the town boomed as a supply camp for the mines developed in the area.

News of the mineral discoveries spread quickly, bringing hundreds of miners and prospectors to the area in 1875. In February 1875, Hinsdale County residents voted to move the county seat from San Juan City to Lake City. 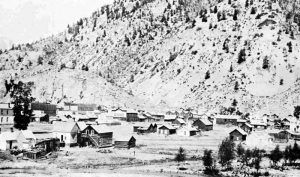 The post office was established on June 18, 1875, and the first newspaper, the Silver World, began the same month. The town was officially incorporated in August. By the end of the year, the town boasted 67 buildings and 400 people. All mail for northern Hinsdale County came through Lake City, carried by the Barlow & Sanderson Stagecoach Company until the railroad finally arrived in the late 1880s.

In 1876, two ore processing plants operated at the south edge of town – the Crooke Brothers Mining and Smelting Company and the Van Gieson Lixiviation Works. In July, the first stagecoach arrived in Lake City and began three trips weekly between Lake City and Saguache. By the end of the year, the population reached about 1000, and the town had two banks, six restaurants, seven saloons, a Presbyterian church, and several stores.

Before 1877, most of the houses were built of logs, and the business buildings were wooden frame structures – small and hurriedly erected. Afterward, more substantial buildings were constructed of brick and stone, including several hotels and larger and more pretentious stores, residences, schools, and churches. 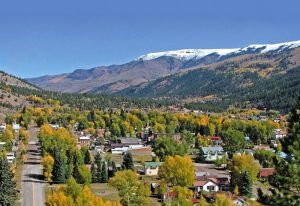 The 1878 State Business Directory reported that Lake City’s population peaked at 3000. By that time, Lake City was well laid out with wide, shaded streets and boasted several substantial buildings constructed of frame, brick, and stone. Stagecoach service expanded to connect Lake City via Capitol City and Engineer Pass to Animas Forks and other mining camps in the San Juans.

During Lake City’s heydays, the city was often described as one of the most attractive in the San Juan Mountains, spurring one historian to describe it:

“The visitor is lost in wonder at the variety and general magnificence of the scenery, the fantastic rock formations, the marvelously picturesque contour of the ranges on either side, and the loveliness of the entire valley… There are pictures here well calculated to set a great landscape painter wild with desire to reproduce them on canvas.” 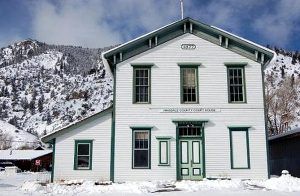 The Hinsdale County Courthouse was built in the summer of 1879 and continues to be utilized today. It is Colorado’s oldest courthouse which continues to be used for its originally intended purpose. It is located at 317 Henson Street.

Despite its promising start, the mining district lacked year-round transportation, abundant ores, and capital to finance development, and the initial boom subsided by 1879. To make matters worse, the town suffered a destructive fire in November, which swept away the better part of the business center.

In 1880, a two-story brick schoolhouse was built at $30,000, and Mrs. Gage served as the first teacher. However, the town’s population dropped the same year to 2,000. One after another, the principal businesses began to close. Citizens departed for more promising fields, chiefly to Leadville and to Summit and Gunnison Counties, where new mineral discoveries had been found.

On April 26, 1882, a tragic incident occurred when Sheriff Edward N. Campbell was killed. When Campbell and his deputy caught two men, George Betts and James Browning, robbing a local residence, they tried to stop them, and Campbell was shot. The two robbers, who also owned a Bluff Street saloon and brothel, quickly made their escape but were caught a few hours later. An angry mob took the men from jail and hanged them from the Ocean Wave Bridge, now the Ball Flats Bridge, the next day. It was the first and only lynching in Lake City. 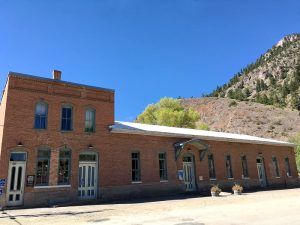 The Armory Hall was built in 1883, which served as an opera house and the headquarters of the Second Battalion of the Colorado National Guard, known locally as the Pitkin Guards. Upstairs, several rooms were elegantly fitted out for the elite Hinsdale Club. Today, the building is used for city municipal offices and large community functions, recreation programs, and the community teen center. It is located at 230 Bluff Street.

When the Ute-Ulay Mine closed in 1883, a severe depression set in, leaving only a small population. It remained this way until August 1889, when the Lake City Branch of the Denver & Rio Grande Railroad made its way to the town, spurring another flurry of mining activity in the area. At that time, many of the former residents who had interests returned, the old works were resumed, and the mines reopened. 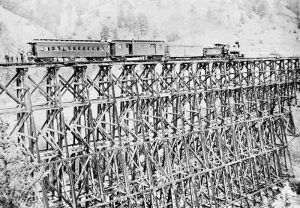 The Lake City Branch had the highest trestles on the entire Denver & Rio Grande narrow-gauge line. The High Bridge at Devils Creek spanned the Lake Fork of the Gunnison and was 800 feet in length and 124 feet above the river.

After the railroad’s arrival, the editor of the “Lake City Times” said:

“The town has awakened from its long sleep; new people and new enterprises are coming in at a rapid rate; outside capital is coming to the rescue, and Lake City is on the eve of prosperity such as it has never seen before. Mines that have been practically untouched for years are now being profitably worked under the impetus given by ample shipping facilities and cheaper rates; the stores and residences that have been so long vacant are rapidly filling up, and the patient people who have endured the horrors and the hardships of business inactivity for years now wear the smile of gladness and joy.” 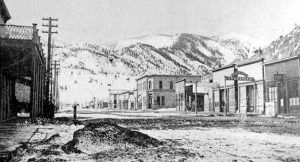 In the late 1880s, Clara Ogden, one of Lake City’s most famous madams, built the Crystal Palace dance hall, located in its red-light district. Known as Hell’s Acre, the red light district featured a concentration of saloons, dance halls, and brothels. It was located on the south end of Bluff Street near the entrance to Henson Creek Canyon. 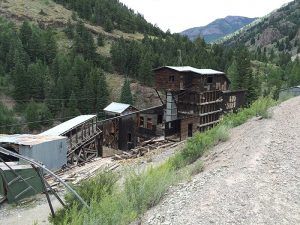 Although prospecting and intermittent mining continued throughout the 20th-century, mining remained a weak economic factor, reflected by the county’s sparse population.

The railroad continued to serve Lake City until a precipitous decrease in mining activity in the mid-1920s caused the branch to begin losing money, and abandonment was attempted in 1931. However, it was initially unsuccessful due to the loud protests from the Lake City residents. The Public Utilities Commission finally allowed the Denver & Rio Grande to give up the line and the last train left Lake City left on May 25, 1933. In August, the line was bought by the owner of the Ute-Ulay Mine at Henson. The company attempted to operate the branch as the San Cristobal Railroad by using a “galloping goose” (a flange-wheeled automobile). But this lasted only a year or so before the rails were pulled and sold as scrap.

Today, Lake City is called home to about 375 people. It continues to hold Hinsdale County’s county seat and is the only incorporated town in the county, which is the most sparsely populated county in Colorado. 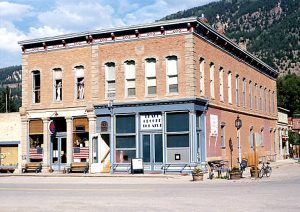 The city was made a National Historic District in 1978 and features over 200 historic buildings. A Lake City Historic Walking Tour is made up of 34 sites with interpretive plaques. The historic structures include homes, outbuildings, barns, churches, public buildings, motor courts, and the oldest operating courthouse in Colorado. For more information and guided tours, visit the Hinsdale County Museum at 130 N. Silver Street.

Visitors find endless outdoor recreation opportunities, including hiking, fishing, hunting, boating, and more. The town is known by many as the jumping-off point to five of Colorado’s fourteeners (14,000′ peaks) — Sunshine, Redcloud, Handies, Wetterhorn, and Uncompahgre.

Lake City is located on the west slope of the continental divide along Colorado Highway 149, northwest of Creede and southwest of Gunnison. It can also be accessed on the Alpine Loop National Backcountry Byway from Ouray or Silverton, with a high-clearance four-wheel-drive vehicle. 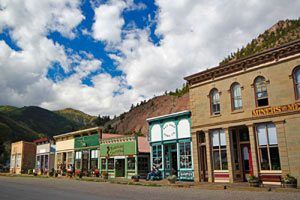