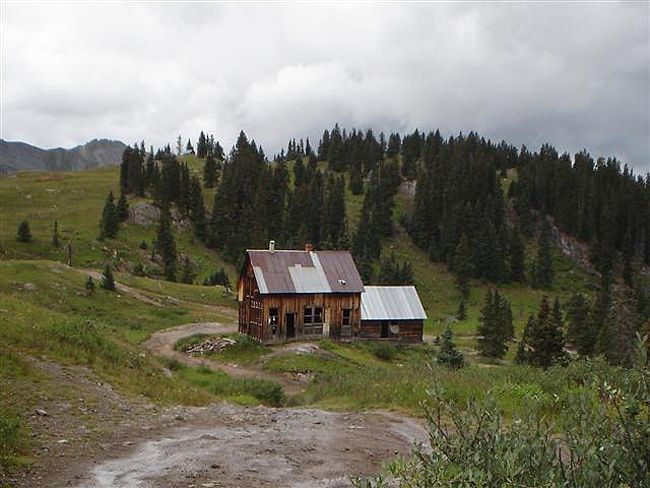 Charles McIntyre and Albert “Abe” Burrows were the first to prospect the area and staked several claims in 1873. It was soon found that a 60-foot-thick vein of quartz ran for several miles in the area, and numerous mines soon dotted the region. A collection of tents and cabins sprung up to serve the mines, and this mining camp was first called Mineral City. Early on, silver ore was hauled to Animas Forks, or sometimes out over the lofty Engineer Pass and down the 19-mile stagecoach route to Lake City for reduction.

In 1875, when the people of the camp applied for a post office, it was found that there was another town with the same name, so the camp was renamed Mineral Point. Mail was delivered daily during the summer months from Lake City. The town boasted a couple of mining company offices before any retail or service business were established. In 1875, McIntyre’s Dakota & San Juan Mining Company established their headquarters here, and the Buffalo & San Juan Mining Company built their offices here the same year.

In 1876, several new businesses were started, including Henry Ketchum’s and John Dowling’s miners’ supply store, an assay shop run by Ehrenfried Steinbach, and a mine brokerage business operated by Albert Dyes. B.F. Weeks and H.B. Perry operated a restaurant, saloon, and hotel called the Forest House. The population at this time, including all the prospectors scattered in the area, numbered around 75. The stagecoach line from both sides also served the community. Fare from Lake City was $3 and from nearby Animas Forks was just 50 cents.

Soon, other businesses were also established, including the Boots and Company General Store, a sawmill, a justice of the peace, and more restaurants and saloons, and its population peaked at several hundred people. The main mines of the area were the Bill Young and San Juan Chief. 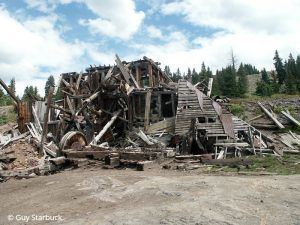 But, by the mid-1870s, the mining companies were looking for more cost-effective ways to handle the many tons of lower grade ore. In 1877, the Bonanza Tunnel began to be driven through the side of Houghton Mountain in California Gulch near Animas Forks. It would follow a straight-line distance of over three miles to Poughkeepsie Gulch near the San Juan Chief Mill when complete. At about the same time, ore production slowed at Mineral Point due to the almost impossible logistics of this more rugged area.

Even though Mineral Point had become established by this time, its destiny appeared bleak, and people began to move on. By the mid-1880s, speculative mining activity in the area slowed to a halt, and work on the Bonanza Tunnel stopped in 1884. But for Mineral Point, it was too late. It was completely abandoned by the 1890s.

Today there are no remains of the townsite, but the ruins of the San Juan Chief Mill continue to stand south of Co Rd 17 and Mineral Creek.

To access the site from Animas Forks, take San Juan County Road 2 north for 2.7 to where the trail comes to a crossroads with Co Rd 17. Turn left (west), and after about a mile, mining remains can be seen in the valley below. Co Rd 17 continues to the northwest, turning into Ouray County Road 18, before connecting with Highway 550 and north to Ouray. This road can be a difficult drive, and some portions are recommended only for expert 4×4 drivers. Return east on Co Rd 17 and north onto Co Road 2 to continue the Alpine Loop Tour. 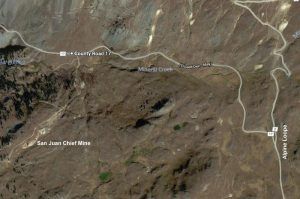