“By the first of June 1859, Gregory Gulch from North Clear Creek to the confluence of Eureka, Nevada, and Spring Gulches was literally crowded with human beings huddled together in tents, wagons, log cabins, dugouts, houses made of brush, and of every conceivable material that promised shelter.”

Central City, Colorado, the county seat of Gilpin County, is a historic mining town founded in 1859 during the Pike’s Peak Gold Rush. 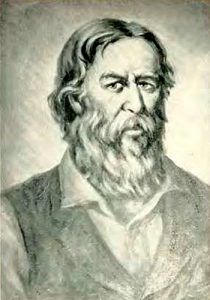 On May 6, 1859, John H. Gregory followed Clear Creek upstream looking for gold. As he pulled a low tree branch out of the way and began to pan the creek, he discovered what was later called the “The Gregory Lode”. Located in a gulch between what later became Central City and Black Hawk, he staked the first of many mining claims in the vicinity. Immediately prospectors flocked to the region and within two months, the population grew to 10,000 people seeking their fortunes. The Clear Creek Mining District was so rich with ore it became known as the “Richest Square Mile on Earth.” Gregory’s discovery is commemorated by a stone monument at the eastern end of Central City.

An article in the Daily Central City Register described the living conditions at the time as thus: “By the first of June 1859, Gregory Gulch from North Clear Creek to the confluence of Eureka, Nevada, and Spring Gulches was literally crowded with human beings huddled together in tents, wagons, log cabins, dugouts, houses made of brush, and of every conceivable material that promised shelter.” 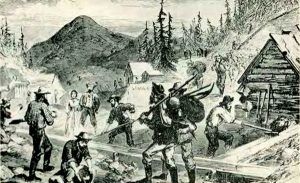 Other gold deposits were found in surrounding gulches and several mining camps sprouted up, including Springfield, Bortonsburg, Missouri City, Nevadaville, Dog Town, Eureka, Russell Gulch, Lake Gulch, Black Hawk Point, Chase’s Gulch and Enterprise City. By the middle of July 1859, between 20,000 and 30,000 people were living in and around Gregory Gulch.

There are two popular stories about how Central City was named. The first involved William N. Byers, founder of the Rocky Mountain News, who pitched his tent squarely in the center of the mining district in June 1859. Supposedly, he suggested that a town be laid out in that vicinity and since it was about halfway between Nevada Nevadaville and Mountain City, it should be called “Central City.” The second is of a miner’s supply store in the area that was called the “Central City Store.” Either way, Central City was born. 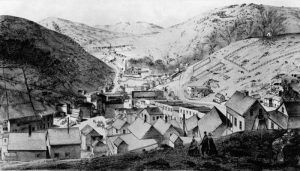 The first newspaper published in the mountains was the Rocky Mountain Gold Reporter and Mountain City Herald. In its first issue, dated August 13, 1859, it contained the following article regarding Mountain City:

“Although not three months old, it contains already some 300 buildings substantially erected, with a population of between 2,800 and 3,000, nearly all of whom are miners. Yet the arts and trades are well represented, we have about 25 stores, 2 jewelry shops, 3 tailor shops, blacksmiths, shoemakers, painters, etc.”

In late September, the first snow began to fall and most of the miners returned to lower elevations; however, a census taken just the next month revealed that nearly 2,300 men were still in the gulch area. 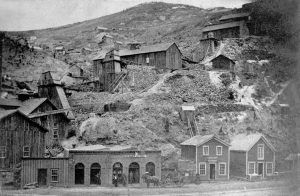 By the end of the year, The Rocky Mountain News estimated that “From a million and a half to two millions of dollars in dust has been taken out, which has found its way to all parts of the Atlantic States and Territories…”

During the winter of 1859-60, many new gold discoveries were made throughout the mountains and by February, miners were beginning to return. During that month, there was “a report of the discovery of a six-pound nugget near Gregory’s.” The discoverer was offered $16 per ounce for it but refused to sell.

Also in February 1860, the first steam engine was assembled in Mountain City. It was used to produce shingles and was ready to crush quartz as soon as the mines would begin delivering ore. This engine cost $1,500 when it was purchased at the foundry in Chicago, Illinois in late 1859. In March 1860, it was sold at Mountain City for $15,000. 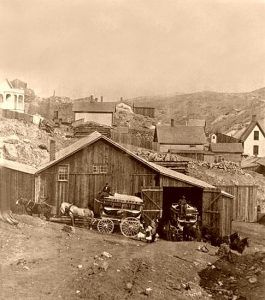 In June 1860, The Western Stage Company began running daily stagecoaches from Denver to Mountain City – the ride taking seven to eight hours. Only one year earlier, it had been a three or four-day journey.  During the summer, the population around Gregory’s Diggings began to stabilize. In 1860, the United States Census listed Central City at 598, Mountain City 840 and Nevada City 879. About 5,000 people were in the immediate area and 34,000 in the mining region.

By August 1860, the easy pickings were over and mining for gold became more difficult. As the depth of the mines increased, extracting gold from the ore became more complex. Due to the primitive technology, as little as 1/3 of the assayed amount of the ore was recovered. Other problems contributed to an economic slowdown in the area, including the Civil War and frequent Indian attacks on wagon trains crossing the Plains. The miners were becoming a rowdy bunch and in 1861, Central City recorded 217 fistfights, 97 revolver fights, 11 Bowie knife fights, and 1 dogfight. Amazingly, no one was killed. 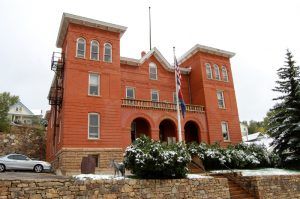 Central City became the county seat when Gilpin County was organized in 1861. The Territorial legislature granted a city charter to the City of Central in March 1864. This was 12 years before Colorado achieved statehood in 1876.

In 1865 Nathaniel P. Hill, a Professor at Brown University, began studying the problem of extracting gold from the sulfide ore. He developed a smelting process that rid the ore of most of its impurities, producing a concentrate of copper, gold or silver. The concentrate then had to be separated and refined.

In 1867, Hill began operating the Boston & Colorado Smelting Company in Black Hawk and mines began shipping ore to the smelter for processing. The concentrate of copper, gold, and silver was then shipped to Swansea, Wales (over 7,000 miles away), where the metals were separated and refined.