The county seat of Ste. Genevieve County, Missouri, Ste. Genevieve is one of the oldest surviving French settlements in Missouri and is the only place in the upper Mississippi Valley where several buildings of the pre-American period have survived. The oldest European settlement in the region, Cahokia (1699), suffered heavily from floods; Kaskaskia (1703) was entirely washed away by a change in the course of the Mississippi River; and the remnants of colonial St. Louis were destroyed either by a fire in 1849 or by urban riverfront development.

Though the exact date of the first French settlements in the vicinity of Ste. Genevieve cannot be determined, it is known that lead was discovered about 30 miles to the southwest of the townsite in 1715. During the first portion of the eighteenth century, no urgent need existed to extend the line of French settlement across the Mississippi River into present-day Missouri. For several decades, the French considered the trans-Mississippi West to be the domain of Native Americans. As the century progressed, however, farming practices resulted in the depletion of soil on the east side of the river, and some inhabitants decided to plant crops on the opposite side about about three miles below present-day Ste. Genevieve.

During its first few years of settlement, in the period 1735-40, Ste. Genevieve was considered a satellite community of Kaskaskia, Illinois located across the river. The earliest known grants of land were made in 1752, when 27 inhabitants owned about three miles of Mississippi River frontage. It was named for Saint Genevieve (who lived in the fifth century AD), the patron saint of Paris.

The earliest settlers of the community moved there from other settlements in Illinois including Kaskaskia, Cahokia, Post Vincennes, Prairie du Rocher, and Nouvelle Chartres. Salt springs on Saline Creek, as well as the lead resources, were probably an important factor in the expansion of the settlement, from which shipments were made upstream to St. Louis or downstream to New Orleans. The settlers also grew foodstuffs for export. Ste. Genevieve was the last community established during the French Regime in the Illinois Country. 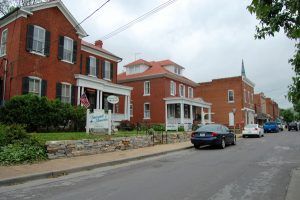 The pattern of initial settlement was influenced by the habitants’ French heritage. The heart of the Ste. Genevieve economy was a very large  compound of arable fields known as le Grand Champ or the Big Field. It consisted of approximately 7,000 acres of land enclosed within a common fence. The parcel was divided into narrow, elongated lots often delineated by pecan trees that extended westward from the Mississippi River. Each lot contained between 68 and 136 acres of land. Orchards and large gardens with all manner of vegetables and fruits filled the remaining portions of the land within the fence.

Ste. Genevieve’s commercial contacts were maintained largely through New Orleans and were dominated by the mercantile policies of France and Spain. The community exported raw materials and imported finished products. Looms and weavers, for example, were not present in the town, because it was the colonial community’s obligation to purchase manufactured cloth from the mother country.

In about 1750,  the “official” village of Ste. Genevieve was laid out as an imperfect grid of square blocks with a public square near the center of the village. By 1752, the population of Ste. Genevieve is recorded to have included 22 white adults and children and two black slaves. Following the Seven Years’ War (1754-1763), Ste. Genevieve’s population increased significantly. The population increase is attributed, in part, to the influx of French Catholics from the east bank of the Mississippi River who feared religious and political persecution at the hands of the British following France’s loss of that territory to England. Although the economy of the city was largely dependent upon agriculture, industries began to develop, and the central business district grew. The 1773 census indicated a population of 676, of which 276 were African Americans.

Floods, notably one in 1785, caused repeated damage, and the town was moved gradually to the present site on high ground. By 1796, only a few huts of traders remained at the old site. Ste. Genevieve, the principal seat of government in the region for many years after western Louisiana passed from French to Spanish control in 1762, thrived under Spanish administration.

During the 1780s and 1790s, about forty percent of all households in Ste. Genevieve owned at least one black or mulatto slave. These slaves were used for a wide variety of tasks including field work, clearing land, cutting wood, mining lead, rowing batteaux, salt making, domestic help, and some skilled labor. Because the economy of Ste. Genevieve revolved around agriculture, black slaves were primarily agricultural laborers. The censuses of 1787 and 1791 indicated that the town’s town six agricultural producers owned about one-half of its black and mulatto slaves. 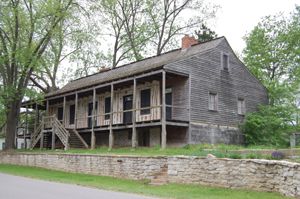 Present documentary and physical evidence indicates that oldest known architectural resources, French vertical log houses, date from the 1790’s. In that same decade, the plat of the core of the present city was laid out between the forks of the Gabouri Creek. Surviving buildings from this era reflect the original French heritage of the community, the influx of Anglo-American settlers, the settlement patterns in the African American community, and the beginning of an influx of German immigrants.

In 1789 Nicolas Janis was granted land in Ste. Genevieve and erected the present-day Janis-Ziegler house in about 1790-91. With the death of Nicholas, his son, François inherited the house and in the early 1800s converted part of it into the Green Tree Tavern. The building remained in the Janis family until 1833, when it was sold to Mathias and Barbara Ziegler. It is the oldest standing structure in the city today.