Ash Fork, Arizona, located in Yavapai County on Route 66, is a small town known as the Flagstone Capital of the World.

Ash Fork started when the Atlantic and Pacific Railroad, later known as the Atchison, Topeka & Santa Fe Railroad, pushed through in October 1882. Established initially as only a railroad siding, it was named by F.W. Smith, General Superintendent of the railroad, for the many ash trees growing on the townsite.

However, long before the railroad arrived, the area had been roamed by Native Americans, as evidenced by numerous pottery shards and arrowheads found in the area, as well as pictorial writings on rocks. In their search for the elusive Seven Cities of Cibola, the Spanish came near the area in the late 1500s. 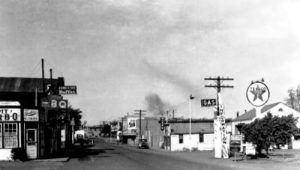 Though this “primitive” terrain had been crossed since the early 1800s by fur trappers and traders on their way from Santa Fe, New Mexico, to Los Angeles, California, the trails were in poor condition, and the region was known to be wild, unexplored, and dangerous. From 1857 to 1860, Lieutenant Edward F. Beale, a crew of 100 men and 22 camels, built the first federal highway in the southwest — the Beale Wagon Road. Later highways, including Route 66, would be paved across portions of this historic trail. 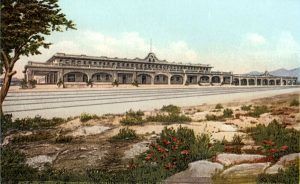 During its earliest days, Ash Fork, like many railroad towns across the region, was mainly called home to railroaders and cowboys when there was no “official” law and order. With so many rowdy men, chaos reigned supreme, and as a result, several citizens in the small settlement organized a vigilance committee to get rid of them. Several are said to have been hanged from an Ash Tree.

Unfortunately, in 1893 the entire town of Ash Fork burned to the ground. However, it was soon rebuilt on the other side of railroad tracks, where it continues to stand today. The stone industry remained profitable, and many stones were used to rebuild much of the town. Before long, citizens proclaimed the town the “Flagstone Capital of the World.”

As the railroad became more popular, the Fred Harvey Escalante Hotel was built in 1907. Opening on March 1, 1907, it was built of steel and concrete in the Mission Style of Spanish architecture. The large hotel and restaurant measured 420 x 200 feet and cost about $115,000. It featured a lunchroom fitted with a circular counter on the ground floor, complete with the ever-popular Harvey Girls. It also sported a large curio shop, newsstand/reading room, and a barbershop. 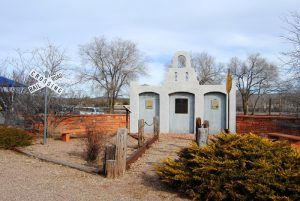 The site of the Escalante Hotel in Ash Fork, Arizona, by Kathy Alexander.

When Route 66 came through, the Fred Harvey Escalante Hotel and restaurant catered to highway and railroad travelers. The new highway also boosted the town’s economy. Later, when the Mother Road received an upgrade to a divided highway, it destroyed many storefronts, sidewalks, and residential streets.

As automobile travel increased, the beautiful Escalante Hotel closed down in 1948. Not many years later, in 1960, the Santa Fe Railroad moved its main line north and away from Ash Fork, resulting in the town losing nearly half its population. Another large fire, known locally as the “Big Fire,” devastated the community on November 20, 1977, destroying most downtown businesses.

At the same time, I-40 was being built, closely following Route 66, except for the stretch between Ash Fork and Kingman, where Route 66 took a more northerly, less direct route. Bypassing the community was yet another blow to the local economy, which has never fully recovered. Unfortunately, it was during this time that the historic Escalante Hotel was demolished. 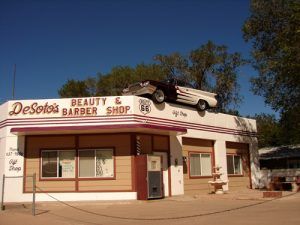 Situated in the first Texaco station in Arizona, this structure on Lewis Avenue in Ash Fork now houses DeSoto’s Beauty & Barber Shop. The old Chrysler DeSoto, perched atop the building, dates back to the early 1960s.

However, the small population continues, supported by five flagstone yards, ranching, mining, and a new generation of Route 66 travelers. The Mother Road through Ash Fork serves as a main thoroughfare through town, now known as Park Avenue. A few historic buildings and old railroad company houses can be seen along this old portion of the pavement.

This historic community features the Ash Fork Route 66 Museum, located at 901 W. Old Route 66, which displays not only Route 66 memorabilia but more exhibits and information on area history. There are also several photo opportunities at Desoto’s Beauty Barber and Gift Shop, located at 314 West Lewis Avenue, the Oasis Lounge at 424 Park Avenue, and the Ranch House Cafe at  111 W Park Avenue. This small town is called home to about 450 people today. 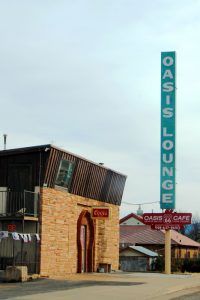 Ash Fork is located about 17 miles west of Williams, Arizona, and had a population of 396 per the 2020 Census