Logs at the Petrified Forest National Park along Route 66 in Arizona. Photo by Kathy Weiser-Alexander.

The Petrified Forest National Park is between Navajo and Holbrook in northeast Arizona, along I-40 and old Route 66. The park is a surprising land of scenic wonders and fascinating science featuring one of the world’s largest and most colorful concentrations of petrified wood, the multi-hued badlands of the Chinle Formation known as the Painted Desert, historic structures, archeological sites, and displays of 225 million-year-old fossils.

The park consists of two large areas connected by a north-south corridor. The northern area encompasses part of the multihued badlands known as the Painted Desert. The southern area includes colorful terrain as well as several concentrations of petrified wood. Several American Indian petroglyph sites are also found in the southern area. 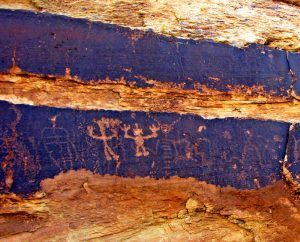 The natural world of Petrified Forest is far more complex than it seems on the surface. Located near the southern edge of the Colorado Plateau, the park is part of an amazing geological region which also includes other famous geological parks such as the Grand Canyon, also in Arizona, and Zion, Bryce, and Arches National Parks in Utah. Each has its own character, including which layer of the geological story is featured by that park.

More than 200 million years ago, large trees and rich vegetation flourished in northeast Arizona. At that time, the region was a tropical wetland with abundant streams and rivers. During heavy rains, the waterways would flood, sweeping fallen trees into the sandy floodplains. Later, volcanic lava destroyed the forest, and the remains were embedded into sediment comprised of volcanic ash, mud, and water. Trees are transitioned to stone by the process of permineralization, a process of fossilization in which the organic materials are replaced with minerals, such as quartz, making a “cast” of the original organism. Millions of years later, the petrified logs were revealed by erosion. 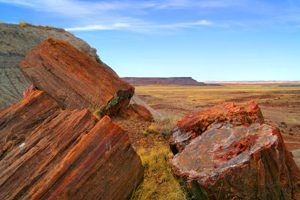 Petrified logs at the Petrified Forest, Arizona by the National Park Service.

Much of the striking banded coloration of the Chinle Formation badlands that make up the Painted Desert region is due to soil formation during the Late Triassic period. The soil suggests that the climate was once dramatically seasonal, with distinct very wet and very dry seasons. This climate was probably similar to the modern monsoon of the Indian Ocean region.

The colorful mudstones and clays of the Painted Desert badlands are composed of bentonite, a product of altered volcanic ash. The clay minerals in the bentonite absorb water and the expansion and contraction properties of the bentonite cause rapid erosion. This prevents vegetation from growing on the slopes of the hills.

Other prominent features created by erosion are the plentiful mesas and buttes located throughout the park. Both have flat tops of more erosion-resistant sandstone over softer clays. Mesas are quite broad but not very tall, while buttes are taller and more narrow.

The Petrified Forest and Painted Desert are also rich in human history, which dates back more than 13,000 years. More than 600 archeological sites have been found in the park. Folsom-type spear points, the earliest artifacts of Paleo-Indians, which lived during the final glacial episodes, have been found, as well as many more artifacts, petroglyphs, and the remains of pueblos from later inhabitants. – See: People of the Painted Desert & Petrified Forest 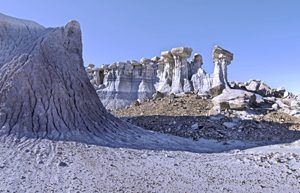 From the 16th through the 18th centuries, explorers looking for routes between Spanish colonies along the Rio Grande to the southeast and other Spanish colonies on the Pacific coast to the west passed near or through the area, which they called El Desierto Pintado, the Painted Desert. However, the park’s oldest Spanish inscriptions, left by descendants of the region’s early Spanish colonists, date only to the late 19th century.

The Petrified Forest area was designated a National Monument on December 8, 1906. The Painted Desert was added later, and on December 9, 1962, the whole monument received National Park status. Today, the park covers 93,532.57 acres.

The Painted Desert Inn was built in 1924 on a high perch overlooking the Painted Desert by a man named Herbert Lore in 1924. The two-story inn, nicknamed named the Stone Tree House, due to the petrified wood used in its construction, was operated as an inn and tourist attraction. 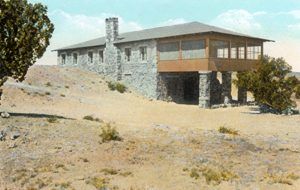 This isolated oasis was purchased by the Petrified Forest National Monument in 1936 and began updating the structure. It would later become the headquarters of the park and service thousands of Route 66 travelers. It closed in 1963 and sat vacant and deteriorating for years. Today, it is fully restored and serves as a museum.

The petrified wood of the Petrified Forest is the “State Fossil” of Arizona. The pieces of permineralized wood are from a family of trees that is extinct in the Northern Hemisphere today, surviving only in isolated stands in the Southern Hemisphere.

During the Late Triassic period, this desert region was located in the tropics and was seasonally wet and dry. In seasonal flooding, the trees washed from where they grew and accumulated in sandy river channels, where they were buried periodically by layers of gravelly sand, rich in volcanic ash from volcanoes further to the west. The volcanic ash was the source of the silica that helped to permineralize the buried logs, replacing wood with silica, colored with oxides of iron and manganese.

Landmarks in the park include the Agate House Pueblo, built of petrified wood; the Agate Bridge, a petrified log spanning a wash, the Painted Desert Inn, designated on the National Register of Historic Places, an old segment of Route 66, and the Puerco Pueblo, as well as numerous scenic formations and hiking trails. 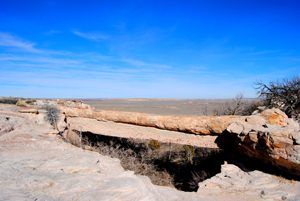 Some 225 million years ago, numerous tall trees washed into the floodplain, where a mix of silt, mud and volcanic ashes buried the logs. The sediment cut off the oxygen and slowed the logs decay. Silica-laden groundwater seeped through the logs and replaced the original wood tissues with silica deposits.

Eventually, the silica crystallized into quartz, and the logs were preserved as petrified wood. Later, centuries of scouring floodwaters washed out the arroyo beneath this 110-foot long petrified log and formed a natural bridge. The petrified log, harder than the sandstone around it, resisted erosion and remained suspended as the softer rock beneath it washed away.

Enthusiastic visitors, fascinated by the bridge worked to preserve it through the establishment of the Petrified Forest National Monument in 1906. Conservationists felt this ages-old natural bridge needed architectural support and in 1911 erected masonry pillars beneath the log. In 1917 the present concrete span replaced the masonry work.