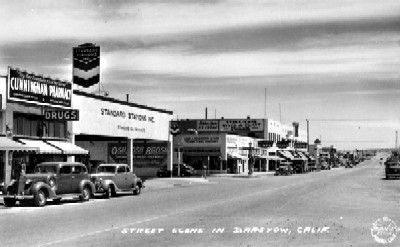 Barstow, California was founded in 1888 when the Santa Fe Railroad arrived. Located on the Mojave River, the area had already become a thriving mining center when silver was discovered six miles north in the Calico Mountains in 1882. 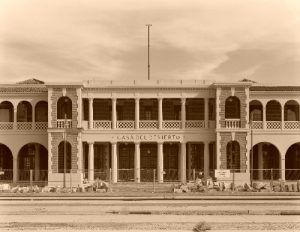 Named for the president of the Santa Fe Railroad, William Barstow Strong, Barstow thrived along with the nearby successful mining towns of Daggett and Calico. However, as the silver began to play out in the nearby mines, Daggett and Calico began to die, but Barstow grew as it became a busy rail center and included a Harvey House, built around 1885, part of a chain of restaurants on the railroad.  At the turn of the century, rail travel was considered glamorous and business was booming, but on September 20, 1908, the Harvey House burned down. It wouldn’t be until 1911 that the Fred Harvey Company rebuilt and opened up the Casa Del Desierto where gourmet cuisine was served on fine china once again to the many travelers along the rails.

Comfortable, luxurious rooms rested the weary rail travelers as the Harvey Girls served food and provided information. The Harvey House had a reputation for friendliness and hospitality and became the focus not only for travelers but for locals. Barstow’s Harvey House was equipped with a full ballroom and was the site for many of the town’s dances and social events. At one time, Barstow’s main street was right in front of the train station and the Harvey Hotel. However, in the 1920s the Santa Fe Railroad literally bought the whole street a moved it to where it is today. The grand opening for the “new” Main Street was July 4, 1925.

As the automobile began to replace rail travel, Route 66 traveled Barstow’s “new” Main Street barreling straight through the middle of town, and the Harvey House remained a popular stopping point. 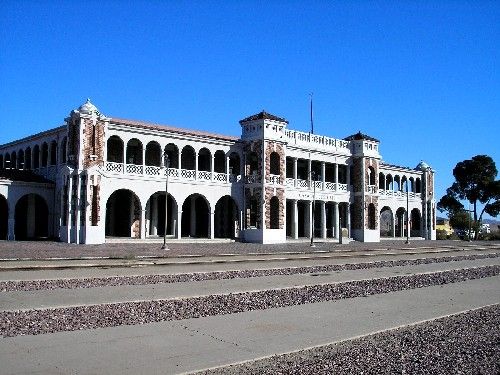 However, as Route 66 gained popularity, and when the Santa Fe Railroad started serving meals on the trains, the Harvey Houses became shadows of their former selves. The building was then used mainly for a machine shop, with a cafeteria and a small Amtrak ticket office. Before long, the Casa Del Desierto was abandoned altogether.

In the late 1980s, Santa Fe Railway decided to tear down the old Harvey House until an outcry was raised by local citizens and historians. The old building was saved by the City of Barstow and restoration began, but not before a significant portion of the building had already been removed. The Casa Del Desierto was re-dedicated in 1999 and is home to several arts groups, the Mother Road Route 66 Museum, and now the Western America Railroad Museum.

As you roll through Barstow along Route 66, which is today’s Main Street in Barstow, keep your eyes open for the Barstow Station on your right at 1611 East Main Street. The Barstow Station includes gift shops and a famous Mcdonald’s with a dining area built from railroad passenger cars, which includes a great collection of vintage photographs. It is also home to Greyhound Bus service. 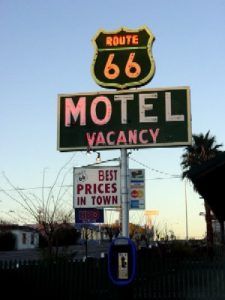 Further on down the road, the historic El Rancho Motel sits on your left at 100 E. Main Street. Built in 1943 with wooden railroad ties from the Tonopah & Tidewater railroad line, the old motel is said to have once been frequented by the likes of Marilyn Monroe. Looking to your right at 195 West Main is the Route 66 Motel. And don’t forget to take a look at the historic Fred Harvey Casa Del Desierto which now houses the Route 66 Museum at 681 North First Avenue, one block north of Route 66 (Main Street.) To get there you can drive over an old old iron bridge that leads to the railroad depot and the site of the historic Harvey House.

Barstow lies at the junction of Interstate Highways 15 and 40, on the routes between Los Angeles, Las Vegas, and Flagstaff.