No map can show the exact dividing line between the actual combatants of North and South. Eleven States seceded: Virginia, the Carolinas, Georgia, Florida, Alabama, Mississippi, Tennessee, Louisiana, Texas, and Arkansas. But the mountain folk of western Virginia and eastern Tennessee were strong Unionists, and West Virginia became a State while the war was being fought. On the other hand, the four border States, though officially Federal under stress of circumstances, were divided against themselves.

In Maryland, Kentucky, Missouri, and Kansas, many citizens took the Southern side. Maryland would have gone with the South if it had not been for the presence of overwhelming Northern sea-power and the absence of any good land frontier of her own. Kentucky remained neutral for several months. Missouri was saved for the Union by those two resourceful and determined men, Lyon and Blair. Kansas, though preponderantly Unionist, had many Confederates along its southern boundary. On the whole, the Union gained greatly throughout the borderlands as the war went on; and the remaining Confederate hold on the border people was more than counterbalanced by the Federal hold on those in the western parts of old Virginia and the eastern parts of Tennessee. Among the small seafaring population along the Southern coast, there were also some strongly Union men.

Counting out Northern Confederates and Southern Federals as canceling each other, so far as effective fighting was concerned a comparison made between the North and South along the line of actual secession reveals the one real advantage the South enjoyed all through–an overwhelming party in favor of the war. When once the die was cast there was certainly not a tenth of the Southern whites who did not belong to the war party; and the peace party always had to hold its tongue. The Southerners formed simpler and far more homogeneous communities of the old long-settled stock and were more inclined to act together when once their feelings were profoundly stirred.

The Northern communities, on the other hand, being far more complex and far less homogeneous, were plagued with peace parties that grew like human weeds, clogging the springs of action everywhere. There were immigrants new to the country and therefore not inclined to take risks for a cause they had not learned to make their own. There were also naturalized, and even American-born, aliens, aliens in speech, race, thought, and every way of life. Then there were the oppositionists of different kinds, who would not support any war government, however, like a perfect coalition, it might be. Among these were some Northerners who did business with the South, especially the men who financed the cotton and tobacco crops. 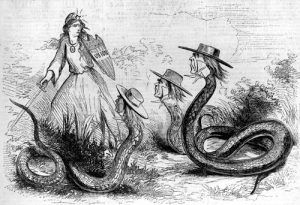 The Copperhead Party – in favor of a vigorous prosecution of peace!

Others, again, were those loose-tongued folk who think any vexed question can be settled by unlimited talk. Next came those “defeatist” cranks who always think their own side must be wrong, and who are of no more practical use than the out-and-out “pacifists” who think everybody wrong except themselves. Finally, there were those slippery folk who try to evade all public duty, especially when it smacks of danger. These skulkers flourish best in large and complex populations, where they may even masquerade as patriots of the kind so well described by Lincoln when he said how often he had noticed that the men who were loudest in proclaiming their readiness to shed their last drop of blood were generally the most careful not to shed the first.

Many of these fustian heroes formed the mushroom secret societies that played their vile extravaganza right under the shadow of the real tragedy of war. Worse still, not content with the abracadabra of their silly oaths, the busybody members made all the mischief they could during Lincoln’s last election. Worst of all, they not only tried their hands at political assassination in the North but they lured many a gallant Confederate to his death by promising to rise in their might for a “Free Northwest” the moment the Southern troopers should appear. Needless to say, not a single one of the whole bombastic band of cowards stirred a finger to help the Confederate troopers who rode to their doom on Morgan’s Raid through Indiana and Ohio.

The peace party wore a copper as a badge, and so came to be known as “Copperheads,” much to the disgust of its more inflated members, who called themselves the Sons of Liberty. The war party, with a better appreciation of how names and things should be connected, used their own descriptive “Copperhead” in its appropriate meaning of a poisonous snake in the grass behind.

The Indians would have preferred neutrality between the two kinds of inevitably dispossessing whites. But neutrality was impossible in what was then the Far West. Not ten thousand Indians fought for both sides put together. On the whole, they fought well as skirmishers, though they rarely withstood shell fire, even when their cover was good and their casualties small. 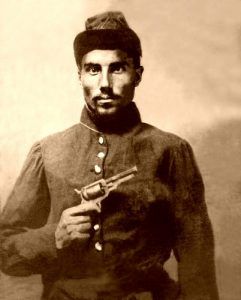 The ten times more numerous negroes were naturally a much more serious factor. The North encouraged the employment of colored labor corps and even colored soldiers, especially after Emancipation. But the vast majority of negroes, whether slave or free, either preferred or put up with their Southern masters, whom they generally served faithfully enough either in military labor corps or on the old plantations. As the colored population of the South was three and a half million this general fidelity was of great importance to the forces in the field.

The total population of the United States in 1861 was about thirty-one and a half million. Of this total twenty-two and a half belonged to the North and nine to the South. The grand total odds were, therefore, five against two. The odds against the South rise to four against one if the blacks are left out. There were twenty-two million whites in the North against five and a half in the South.

This gives the statistical key to the startling contrasts which were so often noted by foreign correspondents at the time, and which are still so puzzling in the absence of the key. The whole normal life of the South was visibly changed by the war. But in the North, the inquiring foreigner could find, on one hand, the most steadfast loyalty and heroic sacrifice, both in the Northern armies and among their folks at home, while on the other he could find a wholly different kind of life flaunting its most shameless features in his face. The theaters were crowded. Profiteers abounded, taking their pleasures with ravenous greed; for the best of their blood-money would end with the war.

Everywhere there was the same fundamental difference between the patriots who carried on the war and the parasites that hindered them. Of course, the two-thirds who made up the war party were not all saints or even perfect patriots.

Nor was the other third composed exclusively of wanton sinners. There were, for instance, the genuine settlers whom the Union Government encouraged to occupy the West, beyond the actual reach of war. But the distinction still remains.